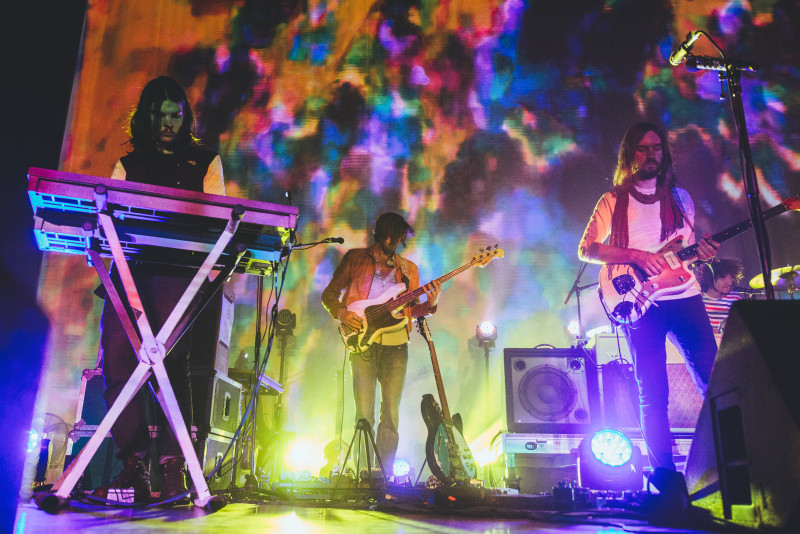 Parker originally conceived the project in Perth in 2007. After a series of singles and EPs, Tame Impala's debut studio album, Innerspeaker, was released in 2010; it was certified gold in Australia and well received by critics. Parker's 2012 follow-up, Lonerism, was also acclaimed, reaching platinum status in Australia and receiving a Grammy Award nomination for Best Alternative Music Album. Tame Impala's third album, Currents, was released in July 2015, and like its predecessor, it won ARIA Awards for Best Rock Album and Album of the Year. Parker won the APRA Award for Song of the Year 2016 for Currents' first track, "Let It Happen". The fourth and most recent studio album, The Slow Rush, was released 14 February 2020.

The origins of the act can be found in the Perth music scene. Parker played in a number of bands, one being the Dee Dee Dums, a rock duo that consisted of Parker (guitar) and Luke Epstein (drums). Tame Impala emerged in 2007 as a Kevin Parker home-recording project in this period and he posted a number of tracks on Myspace. This brought interest from a number of labels and eventually, he signed a worldwide deal with the independent Modular Recordings in July 2008. To transfer these recordings to a live-stage, Parker enlisted the help of Dominic Simper (bass) and Jay Watson (drums) and began playing at some local gigs.

On 18 May 2013, it was announced via Facebook that Allbrook would leave the band to focus on other musical endeavours, and that Cam Avery of Pond and The Growl would take his place. Allbrook played his final gig with the band on their last Australian tour date of 2013 at Perth's Belvoir Amphitheatre, the same venue that Allbrook played his first gig with the band at in 2008. As a farewell gesture, the band played a cover of Outkast's "Prototype".

Tame Impala appeared on Triple J's Hottest 100 list in 2008—their first appearance on the list—with "Half Full Glass of Wine" at number 75. The song is also on the Hottest 100 compilation album.

Tours in 2008 included supports for You Am I, The Black Keys, Yeasayer and MGMT, as well as performances at Southbound Festival, Meredith Music Festival and Falls Festival, and national headline tours in support of their EP. Tours in 2009 included a sold-out six-date "Skeleton Tiger" national headline tour and a five-date UK tour (including Nevereverland UK), as well as performances at V Festival and Groovin The Moo, and a stadium tour with The Living End and Gyroscope.

The signing was soon followed by the release of their self-titled EP in September 2008. It reached the number 1 position on the Australian Independent Record Labels (AIR) Chart and number 10 on the ARIA Physical Singles Chart, with three songs, "Desire Be, Desire Go", "Half Full Glass of Wine" and "Skeleton Tiger" receiving national radio airplay on the Triple J radio station.

Tame Impala's first single, "Sundown Syndrome", was recorded at Toerag Studios in London, UK, with recording engineer Liam Watson, while the band was in the UK in March 2009. "Sundown Syndrome" was premiered by Richard Kingsmill on his "2009" show on Triple J on Sunday 10 May 2009. The song was released in July 2009 on vinyl, and digitally with a cover of "Remember Me" by DJ Blue Boy.

The band then headlined the inaugural "Rottofest" in August 2009, an annual comedy, film and music festival held on Rottnest Island off the coast of Western Australia. Following Rottofest, they embarked on a national tour through September and October 2009 in support of the single. "Remember Me" appeared at number 78 on Triple J's Hottest 100 for 2009.

In November 2012, Lonerism won the 2012 J Award for Australian Album of the Year. It was the second time Tame Impala had won the award, after also winning it for their debut album Innerspeaker in 2010. They are the first band to win the J Award more than once. In January 2013, Lonerism was selected by Rolling Stone for the 2012 Album of the Year award after the band also won the award in 2011 for Innerspeaker. It was also announced as album of the year by UK magazine NME. Additionally, Lonerism was voted number one overall in Rolling Stone, Triple J, NME, Filter, Urban Outfitters, FasterLouder and Obscure Sound's 2012 Album of the Year polls. Lonerism became the first Australian album to win NME's album of the year. "Elephant" and "Feels Like We Only Go Backwards" appeared at number 7 and 9 respectively in Triple J's Hottest 100 for 2012.

Tame Impala's debut album Innerspeaker was released on 21 May 2010. In the UK the official release date was 28 June, but iTunes accidentally made it available for purchase on 12 May. The album was released in the United States on 8 June to general and critical acclaim. Pitchfork named it Best New Music.

The group toured in mid-2010, commencing the Innerspeaker album tour on 13 May 2010 as the opening act for MGMT's 2010 American tour. The band returned to Australia to play at Splendour in the Grass festival, which was followed by a European Tour in July (including an appearance at the Reading Festival) and a national Australian tour in October. In November they returned to the UK and Europe for a fifteen date tour, including their largest London headline show to date which was attended by Noel Gallagher, Tom Meighan, Sergio Pizzorno, Noel Fielding, Alexa Chung and Alison Mosshart, the band then went on to the United States and Canada for twenty headline dates including sold-out shows in Toronto, New York, Los Angeles, and San Francisco. They also received four 2010 ARIA Music Awards nominations which include, "Album of the Year" and "Best Rock Album" for Innerspeaker, "Best Group" and also "Breakthrough Artist".

Parker's music is heavily influenced by late 1960s and early 1970s psychedelic rock, which is achieved through various production methods. Parker said that he has a "fetish for extremely sugary pop music" from artists like Britney Spears and Kylie Minogue. Parker also loves "fucked-up explosive cosmic music" in the vein of The Flaming Lips, with whom Parker collaborated on the track "Children of the Moon" in 2012, for the release The Flaming Lips and Heady Fwends.

Tame Impala's second album, Lonerism was released in 2012 and was mixed by Dave Fridmann. Parker said that Lonerism "represents a departure from his previous work by incorporating an expanded sonic palette, more emotional song writing, and a more pronounced narrative perspective". It was created in a similar set up as Innerspeaker, whereby Parker wrote and recorded the majority of the album by himself at his girlfriend, Jivani Duke's, home in Perth, Australia. Parts of the recording also occurred in Parker's home studio in France.

The band began an international tour in 2012 through 2013, supported by The Growl. During this tour, they played major festivals, such as Coachella, Sasquatch Festival, and appeared on Late Night with Jimmy Fallon. For this tour Watson switched from drums to keyboards and Parker recruited Julien Barbagallo on drums.

In September 2012, Tame Impala's first U.S. feature appeared on the cover of the publication The FADER, in its 82nd issue.

It is believed that Parker started recording the follow-up album to Lonerism at the beginning of 2014, due to various Instagram posts that showed recording taking place at Wave House in Western Australia, where the debut album Innerspeaker was recorded. Prior to this, Parker had been touring with Tame Impala and working on other musical projects, including his disco-funk band, AAA Aardvark Getdown Services. Parker said in May 2013:

In May 2014, Parker spoke of his growing inclination toward the recording of another album in a triple J radio interview, explaining that: "I'm getting more and more sucked into the world of making an album. It's weird how it happens naturally, it's almost feels like a seasonal thing. I've started to think about tracklistings and all the things that come with an album." Describing the sound of the new album, Parker said "I'm gonna try to make it a bit more minimal this time; only use what's needed ... instead of a supreme pizza, where you just throw everything on". Watson added: "[It’s] probably gonna be less rock again and more electronic again, even more than the last one". Parker later stated that the inspiration behind the new polished sound of Tame Impala's third album came from listening to a Fleetwood Mac song. He said that the pureness and cleanness of Fleetwood Mac's song prompted him to attempt to create a more streamlined musical style within Currents.

On 6 January 2015, Spinning Top Music announced that a new Tame Impala album will be released in 2015. During the same month, it was announced that the band would perform at the Boston Calling Music Festival in May 2015.

During the same 30 April 2015 reddit AMA, Parker said, "Up until recently, from all of Tame Impala's record sales outside of Australia I had received.... zero dollars. Someone high up spent the money before it got to me. I may never get that money."

On 5 April 2015, Tame Impala announced and released the album cover for Currents in a Facebook post. A few hours later the band released the first official single from the upcoming album on Facebook called "'Cause I'm a Man". Later that month, on 22 April 2015, Tame Impala officially released "Let it Happen" as the second single from the album. One week later, on 29 April 2015, Kevin Parker held an AMA on reddit, where he provoked fans to ask him to release a new song, then responding with "Disciples", which became the first promotion single for the upcoming album Currents. On 7 May 2015, the band announced that the album would be released in 17 July 2015 and released the third official single, "Eventually".

In October 2017, a Collector's Edition of Currents was announced. Released on 17 November, it included three B-sides and two remixes.

By the end of 2017, Tame Impala announced that they agreed to play the 2018 Mad Cool musical concert in Spain, which would be the first live music show the band agreed to play in 2018. Tame Impala also played a headline set at London's Citadel Festival in July 2018.

In July 2018, during an interview with Beats 1 anchor host Matt Wilkinson, Parker confirmed for the first time that he had begun working on a new Tame Impala album, adding that he was "ready to play some other songs live" and expressing an interest to headline a stage at Glastonbury Festival in 2019. He also stated that he would be "very disappointed" if the new record by Tame Impala wasn't released by summer 2019.

On 1 July 2018, Tame Impala teamed up with artist ZHU to create the single "My Life".

In October 2018, Parker played bass for rapper Travis Scott for a performance of "Skeletons/Astrothunder" on Saturday Night Live, with singer-songwriter John Mayer also part of the backing band.

On 2 January 2019, Tame Impala was announced as a headliner for the 2019 Coachella Valley Music and Arts Festival. They also headlined the 2020 Primavera Sound festival, making them only the second Australian act to do so. Around the same time, Parker announced that he expected to release a new album during that summer. The 2020 album is named The Slow Rush and features 12 tracks recorded in Los Angeles and in Parker's hometown of Fremantle, Australia.

On 20 March 2020, Parker appeared on The Weeknd's album After Hours, producing and providing background vocals on a track called "Repeat After Me (Interlude)".

Tame Impala appeared at the Australian/New Zealand Big Day Out festival in early 2010, performing alongside bands such as Muse, The Mars Volta, Kasabian and Rise Against.