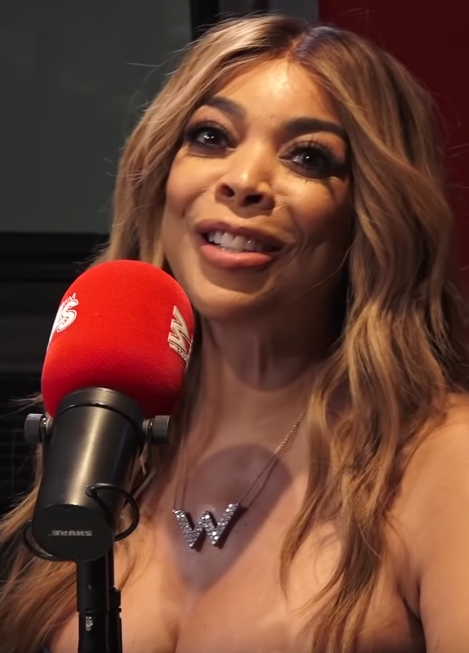 Williams was born on July 18, 1964 in Asbury Park, New Jersey. She is the second of three children born to Shirley and Thomas Williams. At age 5, she moved with her family to the Wayside section of Ocean Township, New Jersey. Williams graduated from Ocean Township High School, and from 1982 to 1986 she attended Northeastern University in Boston, Massachusetts, where she graduated with a Bachelor of Science degree in communications and was a DJ for the college radio station, WRBB.

In 1989, Williams began at urban contemporary WRKS (now WEPN-FM) in New York City as a substitute disc jockey. WRKS hired her full-time for its morning show. A year later, Williams moved to an afternoon drive-time shift, eventually winning the Billboard Award for "Best On-Air Radio Personality" in 1993. In December 1994, Emmis Broadcasting purchased WRKS and switched Williams to the company's other New York property, hip-hop formatted WQHT ("Hot 97"), as WRKS was reformatted into an urban adult contemporary outlet. She was fired from Hot 97 in 1998.

Williams has stated that Bill Cosby attempted to get her fired in 1991 and 1992. She also believes that Cosby is guilty of sexual assault.

In 1995, Williams advertised false rumors that Tupac Shakur had been raped while imprisoned for sexually assaulting a woman in November 1993. Shakur was so jarred at the Williams comment that he recorded a diss track Why U Turn On Me?, which was released posthumously following the rapper's murder in September 1996.

Williams married to her first husband, Bert Girigorie, for five months in 1994. They separated after five months, and were officially divorced a year and a half later. In her autobiography Wendy's Got the Heat, Williams referred to him under the pseudonym "Robert Morris III"

On November 30, 1997, Williams married her second husband, Kevin Hunter. Their son, Kevin Hunter, Jr., was born in 2000. In April 2019, Williams filed for divorce after it was reported Hunter had fathered a child with another woman. The divorce was finalized in January 2020.

In 2001, Williams returned to the New York airwaves when WBLS hired her full-time for a syndicated 2–6 p.m. time slot. Williams' friend, MC Spice of Boston, offered his voiceover services to the show, often adding short rap verses tailored specifically for Williams' show. The New York Times stated that her "show works best when its elements – confessional paired with snarkiness – are conflated," and cited a 2003 interview with Whitney Houston as an example. During the highly publicized interview that "went haywire" and included "a lot of bleeped language", Williams "asked [Houston], insistently, about her drug and spending habits".

In 2006, Wu Tang Clan performer Method Man had a personal and publicized conflict with Williams on The Breakdown, an Internet show on Onloq.com. Williams had talked on air about Method Man's wife's having cancer, which was something he wanted to keep private, her own family members had not yet known about the diagnosis. Williams had dug it up and made it public over the radio. Because of this leaked information, Method Man and his wife had "many problems." Williams also reported unfounded rumors that Method Man had been having an affair with his wife's doctor. Method Man first heard of this while in recording sessions in Los Angeles.

In 2008, Debmar-Mercury offered Williams a six-week television trial of her own talk show. On July 14, 2008, Williams debuted her daytime talk show, The Wendy Williams Show, in four cities during the summer of 2008. During the tryout, The New York Times remarked that the show created a "breakthrough in daytime" by introducing the genre of the "backtalk show.".

Prior to television, Williams was a radio DJ and host and quickly became known in New York as a "shock jockette". She gained notoriety for her on-air spats with celebrities and was the subject of the 2006 VH1 reality TV series The Wendy Williams Experience which broadcast events surrounding her radio show. She was inducted into the National Radio Hall of Fame in 2009.

Williams left her radio show in 2009 to focus on her television program and spend more time with her family. She was also inducted into the National Radio Hall of Fame.

In 2012, it was announced Williams would enter into a "production alliance" with producers Suzanne de Passe and Madison Jones to create movies and television shows aimed at multicultural audiences. These projects will appear under the heading "Wendy Williams presents" and their first project will be VH1 adaptation of a Star Jones novel.

Williams was a spokesperson for Georges Veselle champagne. She posed for PETA's "I'd Rather Go Naked Than Wear Fur" advert campaign in 2012.

In 2013, Williams was cast to play the role of Matron "Mama" Morton on the Broadway musical Chicago. She began her tenure on July 2 and finished her seven-week run on August 11, 2013. Her preparations for the musical were documented in the TV Guide docuseries Wendy Williams: How You Doin', Broadway?!, which was produced by her own production company, Wendy Williams Productions.

In February 2013, it was announced that Williams and her husband and manager, Kevin, were launching a reality television production company, Wendy Williams Productions. that will produce unscripted content, including reality television and game shows. Williams was an executive producer on the show Celebrities Undercover (2014).

Before Wendy turned 50, stand-up comedy was on her bucket list. In 2014, Lipshtick called Williams to participate in their first all-female-based comedy series at the Venetian in Las Vegas. Williams made her sold-out comedy debut on July 11, 2014. Williams' comedy tour was called "The Sit-down Comedy Tour." Williams returned to Lipshtick on October 31, 2014, and November 1, 2014, after she made a sold-out debut in July.

In 2014, Williams and two others produced a biopic on the early 2000s R&B artist Aaliyah, entitled Aaliyah: The Princess of R&B. The biopic attracted much controversy as Aaliyah's family neither consented nor authorized the use of Aaliyah's image or her material for the biopic. The film also romanticized the hebephilic relationship and subsequent illegal marriage of the young singer and R. Kelly, who in 2019 was indicted of 10 counts of aggravated criminal sexual abuse, obstruction of justice, and 18 federal counts, including child pornography, kidnapping and forced labor, as of July 12, 2019. Critical reception to Aaliyah: The Princess of R&B was predominantly negative. Jon Caramanica of The New York Times panned the film, criticizing it as "ham-handed" and "underwhelming" and writing "Condensing the singer's life into such a short space requires a cruel knife and, in this case, a wildly imprecise one. A good film doesn't show its seams. This one — based on Aaliyah: More Than a Woman, a biography by Christopher John Farley — is mostly seams. Much of the acting has dull edges, and the screenplay is aggravatingly stilted." The Wall Street Journal also criticized the film, commenting that the "overuse of the three and four-way split screen montages only enhanced the lack of material." Viewer reaction for the film was similarly extremely negative, and fans mocked the film on social media websites, using the hashtags #LifetimeBiopics and #LifetimeBeLike.

Williams also executive produced the Lifetime biopic Aaliyah: The Princess of R&B, which premiered on November 15, 2014. In September 2015, the documentary series Death By Gossip with Wendy Williams premiered on the Investigation Discovery channel, both hosted and produced by Williams.

By partnering with the Home Shopping Network (HSN), Williams debuted a line of dresses, pants, sweaters and skirts fit for the everyday woman. Her HSN Clothing line debuted on March 28, 2015. Williams told viewers on her talk show that according to HSN, the debut was their most watched premiere since the onset of the program. The Wendy Williams line is sold exclusively at HSN.

The Wendy Williams Show has been renewed through the 2020–21 television season on the Fox Television Stations.The renewal will keep Wendy on air through its 13th season. During the November 2015 sweeps period, the talk show finished either No. 1 or 2 in the key demo of women 25-54 in 55% of the U.S. and 20 of the top-25 markets.

Williams has Graves' disease and hyperthyroidism , which caused her to miss episodes in 2018, 2019, and 2020; she has been hospitalized several times due to complications from the disease. In 2019, Williams also announced she had been diagnosed with lymphedema, a non-fatal condition that causes swelling of the lower extremities.

Williams had not missed a show until February 2018, when she took one week off; however, on February 21, 2018, Williams announced that her show would be on three weeks' hiatus due to her complications with Graves' disease and hyperthyroidism.

In 2019, Williams hosted the "Wendy Williams & Friends: For the Record... Umm Hmmm!" U.S. comedy tour featuring performances from various comedians. The first date, scheduled for August 17, 2019 in Newark, New Jersey, was canceled the day before because of a “scheduling conflict,” according to the venue, but Page Six reported low ticket sales were to blame. More dates in Philadelphia, Ohio and Atlanta were ultimately canceled, with statements from the venues saying the tour was "sidelined by the headlines." The final remaining date in St. Petersburg, Florida, which was rescheduled from August 2, 2019, to September 21, 2019, was canceled September 20. The venue cited "unforeseen circumstances."

In January 2019, a statement from the Williams Hunter family revealed that Williams had been hospitalized due to complications from Graves' disease and that her return to the show would be delayed indefinitely as a result. Guest hosts such as Nick Cannon filled in for Wendy during her absence; she returned on March 4, 2019.

Williams has been open on her show about her past with substance abuse, particularly with cocaine. In March 2019, Williams revealed on an episode that she had been living in a sober house for several months, with only her husband and son knowing about it prior to her revelation.

In January and February 2020, Williams was criticized several times over remarks made on her show. In January, while talking about actor Joaquin Phoenix, Williams used her finger to pull up a part of her lip to resemble a cleft palate (a condition which Phoenix has denied having) , which many took to believe she was mocking him. Williams apologized on her show. In February, Williams was criticized again for making comments many regarded as homophobic while talking about the fictional holiday "Galentine's Day"; she again apologized, this time in an emotional video posted to her official social channels online. Shortly thereafter, while talking about the death of Amie Harwick, Williams made a joke referring to Harwick's ex-fiancé Drew Carey and his job on The Price Is Right, saying that show's catchphrase "Come on Down!!" in response to Harwick being thrown off of a balcony. In April 2020, Williams was also criticized after remarks she made saying that Yaya Mayweather, the daughter of Floyd Maywheather, should be arrested for at least eight years for a recent alleged stabbing because "she sent a woman to a hospital for no good reason".

In early March 2020, the show discontinued its live audience for two tapings due to the coronavirus pandemic; Williams's staff filled in the seats. Shortly thereafter, production on the show was halted. The show reemerged as The Wendy Williams Show @ Home, broadcast through video chat from Williams's apartment, and continuing through May 15, when production was halted again due to a flare in Williams's Graves disease.