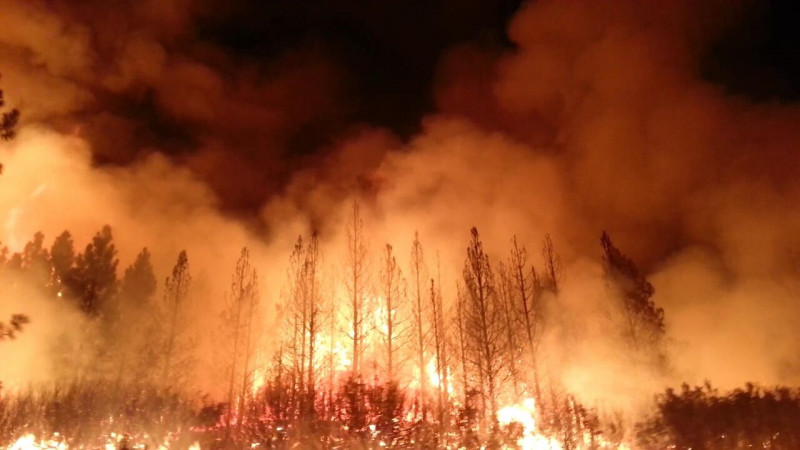 The human use of fire for agricultural and hunting purposes during the Paleolithic and Mesolithic ages altered the preexisting landscapes and fire regimes. Woodlands were gradually replaced by smaller vegetation that facilitated travel, hunting, seed-gathering and planting. In recorded human history, minor allusions to wildfires were mentioned in the Bible and by classical writers such as Homer. However, while ancient Hebrew, Greek, and Roman writers were aware of fires, they were not very interested in the uncultivated lands where wildfires occurred. Wildfires were used in battles throughout human history as early thermal weapons. From the Middle ages, accounts were written of occupational burning as well as customs and laws that governed the use of fire. In Germany, regular burning was documented in 1290 in the Odenwald and in 1344 in the Black Forest. In the 14th century Sardinia, firebreaks were used for wildfire protection. In Spain during the 1550s, sheep husbandry was discouraged in certain provinces by Philip II due to the harmful effects of fires used in transhumance. As early as the 17th century, Native Americans were observed using fire for many purposes including cultivation, signaling, and warfare. Scottish botanist David Douglas noted the native use of fire for tobacco cultivation, to encourage deer into smaller areas for hunting purposes, and to improve foraging for honey and grasshoppers. Charcoal found in sedimentary deposits off the Pacific coast of Central America suggests that more burning occurred in the 50 years before the Spanish colonization of the Americas than after the colonization. In the post-World War II Baltic region, socio-economic changes led more stringent air quality standards and bans on fires that eliminated traditional burning practices. In the mid-19th century, explorers from HMS Beagle observed Australian Aborigines using fire for ground clearing, hunting, and regeneration of plant food in a method later named fire-stick farming. Such careful use of fire has been employed for centuries in the lands protected by Kakadu National Park to encourage biodiversity.

In 1937, U.S. President Franklin D. Roosevelt initiated a nationwide fire prevention campaign, highlighting the role of human carelessness in forest fires. Later posters of the program featured Uncle Sam, characters from the Disney movie Bambi, and the official mascot of the U.S. Forest Service, Smokey Bear. Reducing human-caused ignitions may be the most effective means of reducing unwanted wildfire. Alteration of fuels is commonly undertaken when attempting to affect future fire risk and behavior.

Wildfires can affect local atmospheric pollution, and release carbon in the form of carbon dioxide. Wildfire emissions contain fine particulate matter which can cause cardiovascular and respiratory problems. Increased fire byproducts in the troposphere can increase ozone concentration beyond safe levels. Forest fires in Indonesia in 1997 were estimated to have released between 0.81 and 2.57 gigatonnes (0.89 and 2.83 billion short tons) of CO2 into the atmosphere, which is between 13%–40% of the annual global carbon dioxide emissions from burning fossil fuels. In June and July of 2019, fires in the Arctic emitted more than 140 megatons of carbon dioxide, according to an analysis by CAMS. To put that into perspective this amounts to the same amount of carbon emitted by 36 million cars in a year. The recent wildfires and their massive CO2 emissions mean that it will be important to take them into consideration when implementing measures for reaching greenhouse gas reduction targets accorded with the Paris climate agreement. Due to the complex oxidative chemistry occurring during the transport of wildfire smoke in the atmosphere, the toxicity of emissions was indicated to increase over time.

An increase in PM smoke emitted from the Hayman fire in Colorado in June 2002, was associated with an increase in respiratory symptoms in patients with COPD. Looking at the wildfires in Southern California in October 2003 in a similar manner, investigators have shown an increase in hospital admissions due to asthma symptoms while being exposed to peak concentrations of PM in smoke. Another epidemiological study found a 7.2% (95% confidence interval: 0.25%, 15%) increase in risk of respiratory related hospital admissions during smoke wave days with high wildfire-specific particulate matter 2.5 compared to matched non-smoke-wave days.

Above all, fighting wildfires can become deadly. A wildfire's burning front may also change direction unexpectedly and jump across fire breaks. Intense heat and smoke can lead to disorientation and loss of appreciation of the direction of the fire, which can make fires particularly dangerous. For example, during the 1949 Mann Gulch fire in Montana, United States, thirteen smokejumpers died when they lost their communication links, became disoriented, and were overtaken by the fire. In the Australian February 2009 Victorian bushfires, at least 173 people died and over 2,029 homes and 3,500 structures were lost when they became engulfed by wildfire.

In 2014, an international campaign was organized in South Africa's Kruger National Park to validate fire detection products including the new VIIRS active fire data. In advance of that campaign, the Meraka Institute of the Council for Scientific and Industrial Research in Pretoria, South Africa, an early adopter of the VIIRS 375 m fire product, put it to use during several large wildfires in Kruger.

In 2015 a new fire detection tool is in operation at the U.S. Department of Agriculture (USDA) Forest Service (USFS) which uses data from the Suomi National Polar-orbiting Partnership (NPP) satellite to detect smaller fires in more detail than previous space-based products. The high-resolution data is used with a computer model to predict how a fire will change direction based on weather and land conditions. The active fire detection product using data from Suomi NPP's Visible Infrared Imaging Radiometer Suite (VIIRS) increases the resolution of fire observations to 1,230 feet (375 meters). Previous NASA satellite data products available since the early 2000s observed fires at 3,280 foot (1 kilometer) resolution. The data is one of the intelligence tools used by the USFS and Department of Interior agencies across the United States to guide resource allocation and strategic fire management decisions. The enhanced VIIRS fire product enables detection every 12 hours or less of much smaller fires and provides more detail and consistent tracking of fire lines during long-duration wildfires – capabilities critical for early warning systems and support of routine mapping of fire progression. Active fire locations are available to users within minutes from the satellite overpass through data processing facilities at the USFS Remote Sensing Applications Center, which uses technologies developed by the NASA Goddard Space Flight Center Direct Readout Laboratory in Greenbelt, Maryland. The model uses data on weather conditions and the land surrounding an active fire to predict 12–18 hours in advance whether a blaze will shift direction. The state of Colorado decided to incorporate the weather-fire model in its firefighting efforts beginning with the 2016 fire season.

As of August 2020, the wildfires in that year were 13% worse than in 2019 due primarily to climate change and deforestation. The Amazon rainforest's existence is threatened by fires. According to Mike Barrett, Executive Director of Science and Conservation at WWF-UK, if this rainforest is destroyed "we lose the fight against climate change. There will be no going back.” Record-breaking wildfires in 2021 occurred in Turkey, Greece, California and Russia, thought to be linked to climate change.

In 2019, extreme heat and dryness caused massive wildfires in Siberia, Alaska, Canary Islands, Australia, and in the Amazon rainforest. The fires in the latter were caused mainly by illegal logging. The smoke from the fires expanded on huge territory including major cities, dramatically reducing air quality.

In the summer of 1974–1975 (southern hemisphere), Australia suffered its worst recorded wildfire, when 15% of Australia's land mass suffered "extensive fire damage". Fires that summer burned up an estimated 117 million hectares (290 million acres; 1,170,000 square kilometres; 450,000 square miles). In Australia, the annual number of hot days (above 35 °C) and very hot days (above 40 °C) has increased significantly in many areas of the country since 1950. The country has always had bushfires but in 2019, the extent and ferocity of these fires increased dramatically. For the first time catastrophic bushfire conditions were declared for Greater Sydney. New South Wales and Queensland declared a state of emergency but fires were also burning in South Australia and Western Australia.