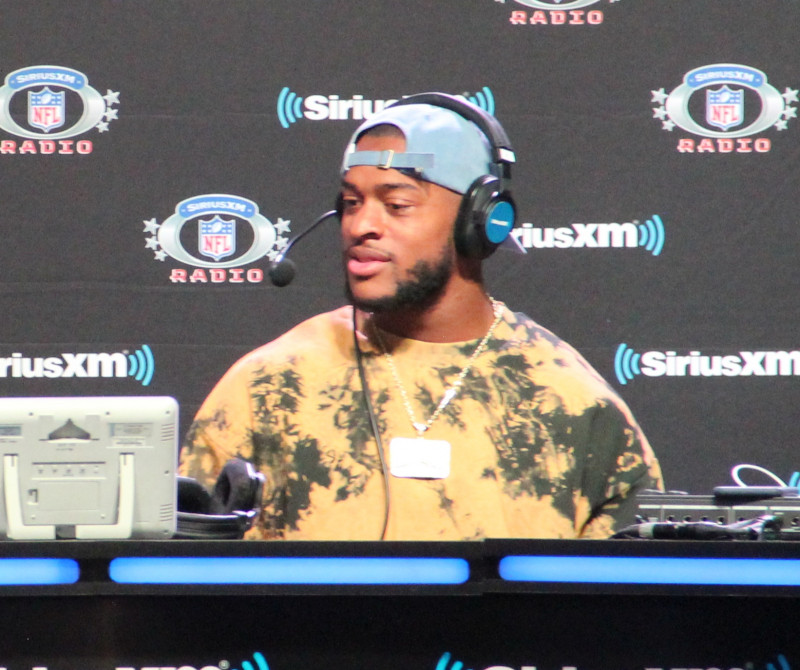 Allen Bernard Robinson II (born August 24, 1993) is an American football wide receiver for the Chicago Bears of the National Football League (NFL). He was drafted by the Jacksonville Jaguars in the second round of the 2014 NFL Draft, and played for the Jaguars for four seasons before signing with the Bears in 2018. He played college football at Penn State.

Robinson was born in Detroit, Michigan. He attended St. Mary's Preparatory, where he played on the football team. In his senior season, he led the Eaglets to the Division 3 State Championship, where they lost 35–27 to East Grand Rapids High School. He was a teammate of former Penn State quarterback Rob Bolden. In addition to football, Robinson was a competitor for the St. Mary's Preparatory track and field team. Robinson committed to Penn State on November 29, 2010 after being recruited by Penn State assistant coach Ron Vanderlinden. He had also received offers from Minnesota, Buffalo, and Toledo.

Robinson appeared in 12 games and caught three passes for 29 yards during his freshman year in 2011 under head coach Joe Paterno. On September 10, 2011, he had one reception for 12 receiving yards, the first of his collegiate career, in a 27–11 loss to #3 Alabama. He made his first career start on the road against #15 Wisconsin in a vital game that would help determine the Big Ten Leaders Division champion.

After losing Justin Brown, who transferred to Oklahoma, Devon Smith, who transferred to Marshall, and Curtis Drake, who was dismissed after a violation of team rules, Robinson was quickly thrust into the spotlight as the team's number one returning wide receiver in 2012 under new head coach Bill O'Brien.

In his sophomore season, Robinson totaled 77 receptions for 1,018 receiving yards and 11 receiving touchdowns, which all led the Big Ten Conference in 2012. His 77 receptions were the most by a sophomore in school history. He won the Richter–Howard Receiver of the Year award for the 2012 season.

The Jacksonville Jaguars selected Robinson in the second round with the 61st overall pick in the 2014 NFL Draft. He was the 11th wide receiver selected and the second receiver drafted by the Jacksonville Jaguars in 2014, behind Marqise Lee who was selected in the second round at 39th overall. In addition, Robinson was one of three Penn State Nittany Lions to be selected that year. On June 21, 2014, the Jaguars signed Robinson to a four-year, $3.51 million contract that included $1.17 million guaranteed and a signing bonus of $877,718.

Robinson became was the first wide receiver to lead the Big Ten in receptions and yardage since 1985. He won the Richter–Howard Receiver of the Year award for the second consecutive season. Robinson was named an All-American by The Sporting News and Phil Steele named Robinson to his second-team All-America squad. On January 2, 2014, he announced that he would forgo his senior season and enter the 2014 NFL Draft.

After Robinson and Hurns both had breakout seasons in 2015 with over 60 receptions, 1,000 receiving yards, and 10 touchdown receptions each, they were nicknamed "Thunder and Lightning" and "The Allen Brothers".

The Jacksonville Jaguars finished the season with a dismal 3–13 record and head coach Gus Bradley was fired after Week 15. Interim head coach Doug Marrone was hired on January 9, 2017. Robinson finished the 2016 season with 73 receptions for 883 receiving yards and six receiving touchdowns.

During Week 1 against the Houston Texans, Robinson had one reception for 17 yards but had to leave the game early in the first quarter with an apparent knee injury. Hours later, it was confirmed that his left knee was diagnosed with a torn ACL, which prematurely ended his 2017 season. He was placed on injured reserve on September 12, 2017.

Robinson finished the 2018 season with 55 catches for 754 receiving yards and four receiving touchdowns. He received an overall grade of 77.7 from Pro Football Focus in 2018, which ranked as the 28th highest grade among all qualifying wide receivers. In his postseason debut, a 16–15 defeat to the Philadelphia Eagles in the Wild Card Round, Robinson set two postseason franchise records: 10 receptions, which tied with Matt Forte, and 143 receiving yards.

On March 14, 2018, Robinson signed a three-year, $42 million contract with the Chicago Bears. He was part of a position group that contained Taylor Gabriel, Anthony Miller, and Josh Bellamy. He made his Bears debut in the season opener against the Green Bay Packers on NBC Sunday Night Football, recording a team-high 61 yards. The next week, he brought in a season-high 10 receptions for 83 yards in a 24–17 victory over the Seattle Seahawks on Monday Night Football. On September 30, he scored his first receiving touchdown with the Bears on a 14-yard reception from Mitchell Trubisky in a 48–10 victory over the Tampa Bay Buccaneers. The next week, he scored again against the Miami Dolphins on a 12-yard catch as part of a 64-yard performance on five receptions in the 31–28 overtime loss. In Week 10, a 34–22 victory over the Detroit Lions, Robinson had six catches for 133 yards and two touchdowns.

On March 9, 2021, the Bears placed the franchise tag on Robinson. He signed the one-year tender on March 24.