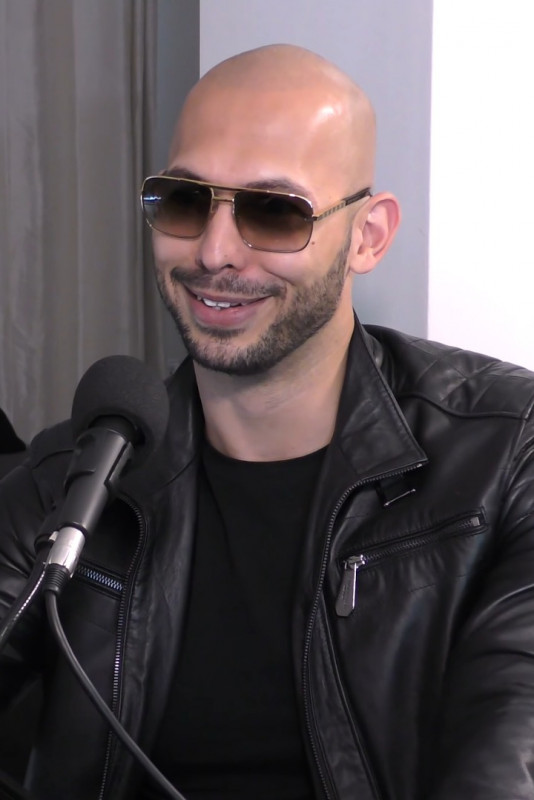 Emory Andrew Tate III (born December 1, 1986 ) is an American-British Internet personality and former professional kickboxer. Following his kickboxing career, Tate began offering paid courses and memberships through his website and later rose to fame as an online influencer. Tate's comments on social media have been deemed as misogynistic and have resulted in his bans from several platforms.

Tate was born on December 1, 1986, in Washington, D.C. He grew up in Goshen, Indiana and Chicago, later moving to Luton, England as a child.

In 2005, Tate started practicing boxing and martial arts. In November 2008, Tate was ranked 7th best light-heavyweight kickboxer in Britain by the International Sport Kickboxing Association (ISKA). In 2009, while employed in selling television advertising, he won the British ISKA Full Contact Cruiserweight championship in Derby, England, and was ranked number one in his division in Europe. Though he had won 17 of his 19 fights, he said it was his first belt and title. In 2011, Tate won his first ISKA world title in a rematch against Jean-Luc Benoit via knockout, having previously lost to Benoit by decision. In December 2012, Tate lost the Enfusion championship tournament to Franci Grajš. Before his loss, he had won his previous 18 fights, all by knockout, and was ranked second best light-heavyweight kickboxer in the world. In 2013, Tate won his second ISKA world title in a 12-round match against Vincent Petitjean, making him world champion in two different weight divisions. He has since retired from combat sports.

In 2016, while a guest on the seventeenth season of Big Brother, Tate came under scrutiny for his homophobic and racist comments on Twitter. After the release of a video in which Tate appeared to beat a woman with a belt, Tate was removed from the show after only six days of participation. Both Tate and the woman said that they were friends and that the actions in the video were consensual.

Tate received attention for his tweets describing his view of what qualifies as sexual harassment amid the Harvey Weinstein sexual abuse cases and for tweeting several statements about his view that sexual assault victims share responsibility for their assaults. In 2017, he was criticized for tweeting that depression "isn't real".

Three of Tate's Twitter accounts were suspended at different times. In 2021, an account that he created to evade his previous ban was verified by Twitter contrary to their policies. The account was subsequently permanently suspended, and Twitter said the verification occurred in error. In August 2022, following an online campaign to deplatform him, Tate was permanently banned from Facebook, and Instagram, where he had 4.7 million followers. Meta claimed he had violated their policy on "dangerous organizations and individuals". TikTok, where videos featuring his name as a hashtag have been viewed 13 billion times, removed his account as well after determining that it violated their policies on "content that attacks, threatens, incites violence against, or otherwise dehumanizes an individual or a group". Shortly thereafter, YouTube also suspended his channel citing multiple violations, including hate speech and COVID-19 misinformation, and Tate subsequently deleted his channel on Twitch.

On April 11, 2022, Tate's house was raided after Romanian police received a tip that an American woman may be held at the property, leading to a human trafficking investigation. He was interrogated and released. Tate has denied any wrongdoing, and called it a case of swatting.

Tate operates Hustler's University, a platform where members pay a monthly membership fee to receive instruction on topics such as dropshipping and cryptocurrency trading. The platform employed an affiliate marketing program, where members received a commission for recruiting others to the platform. Tate became highly prominent during 2022 by encouraging members of Hustler's University to post large numbers of videos of him to social media platforms in an effort to maximize engagement. As of August 2022, its website had amassed over 100,000 subscribers. That same month, Stripe pulled out of processing subscriptions for the platform, and Hustler's University shut down its affiliate marketing program. Paul Harrigan, a marketing professor at the University of Western Australia, stated the affiliate program constituted a social media engagement pyramid.

In October 2022, Tate announced on his Gettr account that he had converted to Islam. A video of Tate praying at a mosque in Dubai, UAE, went viral.

According to Tate himself, his net worth is approximately $710 million as of December 1, 2022.