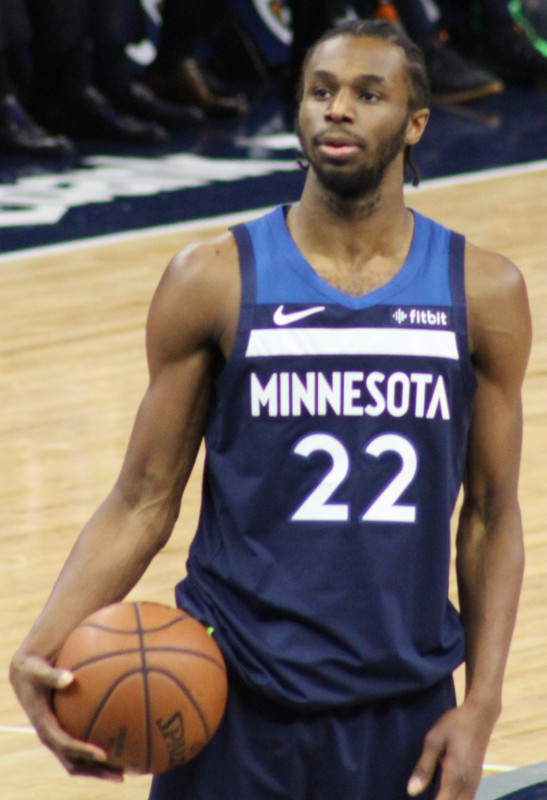 Andrew Christian Wiggins (born February 23, 1995) is a Canadian professional basketball player for the Golden State Warriors of the National Basketball Association (NBA). He was selected with the first overall pick in the 2014 NBA draft by the Cleveland Cavaliers after one year of college basketball with the Kansas Jayhawks.

On March 8, 2014, Wiggins scored 41 points against West Virginia, the most for a Big 12 Conference freshman since Michael Beasley scored 44 points against Baylor in 2008.

Wiggins had been rated as the top prospect for 2014, but announced in October 2012 that he would officially reclassify into his original high school class of 2013, and was immediately placed ahead of the previous number one prospect, Jabari Parker, by ESPN.

On February 7, 2013, after an article in Sports Illustrated criticized Canadian basketball and Wiggins' work ethic, he responded later that day, scoring 57 points in a 111–59 win over Marietta College.

In April 2013, Wiggins played in the Jordan Brand Classic All-American game in Brooklyn. He scored 19 points and tied Julius Randle for lead scorer for the East team.

Wiggins committed to Kansas on May 14, 2013. Before the announcement, he had narrowed his choices to Florida State, Kentucky, Kansas and North Carolina. Wiggins joined the Kansas team on June 19, 2013.

On January 13, 2014, Wiggins scored 17 points and collected 19 rebounds in a 77–70 victory over Iowa State, becoming only the second freshman in the last 15 years (along with Michael Kidd-Gilchrist) to amass those numbers in a win against a ranked opponent.

Wiggins averaged 17.1 points per game (ppg), 5.9 rebounds per game (rpg), and made 34.1% of his three-point field goals in his freshman year at Kansas. On January 22, 2014, Wiggins was named a Top 25 Finalist for the John R. Wooden Men's Player of the Year award by the Los Angeles Athletic Club. On February 28, he was named one of the 10 semi-finalists for Naismith College Player of the Year.

Wiggins declared for the 2014 NBA draft on March 31, 2014. He was selected first overall in the draft by the Cleveland Cavaliers on June 26, 2014, becoming just the second Canadian picked number one in the draft, after Anthony Bennett, who had been selected first overall one year prior in the 2013 NBA draft, also by Cleveland. On August 23, a three-team trade was completed involving the Cavaliers, the Minnesota Timberwolves, and the Philadelphia 76ers. As part of the deal, Wiggins and Bennett were traded to the Wolves, along with Thaddeus Young, then of the Sixers. The Cavaliers received Kevin Love from Minnesota, while the Sixers received Luc Mbah a Moute and Alexey Shved from Minnesota and a 2015 first-round draft pick from Cleveland. Wiggins became just the second player since the ABA–NBA merger to be drafted as the number one pick, only to be traded afterwards without playing a single game for the team he was originally selected for; Chris Webber was the first following the 1993 draft.

In his NBA debut on October 29, 2014, Wiggins scored six points in a 105–101 season-opening loss to the Memphis Grizzlies. He went on to earn Rookie of the Month honours in the Western Conference for the first two months of the season. On January 31, he scored 33 points in a loss to the Cavaliers. On February 13, Wiggins won the Rising Stars Challenge MVP after scoring 22 points for Team World in a 121–112 win over Team USA. On April 30, he was named the NBA Rookie of the Year for the 2014–15 season.

On August 20, 2015, Wiggins was named to the Canadian national team roster for the 2015 FIBA Americas Championship, a qualifying tournament for the 2016 Summer Olympics. Wiggins helped Canada win the bronze medal; he led the team in scoring, with 15.1 points per game, and he was named to the All-Tournament Team.

On November 7, 2015, Wiggins scored a game-high 31 points in a 102–93 overtime win over the Chicago Bulls. Two days later, he tied his career high with 33 points in a 117–107 win over the Atlanta Hawks, thus recording consecutive 30-point games for the first time in his career. On December 18, he recorded 32 points, 10 rebounds and six assists in a 99–95 win over the Sacramento Kings, joining LeBron James, Kevin Durant and Tobias Harris as the only players 20 or younger to record at least 30 points, 10 boards and five assists in a game since 2000. On January 8, 2016, he scored a then career-high 35 points in a loss to the Cleveland Cavaliers.

On October 24, 2018, Wiggins was inactive for only the second time in his career, sitting out the Timberwolves' loss to the Toronto Raptors because of a bruised right quadriceps. The last time Wiggins was inactive was November 10, 2015, when he sat out a loss to the Charlotte Hornets because of a sore right knee. Wiggins returned to action on October 31 against the Utah Jazz after missing three games. He struggled early in the season, culminating in an 0-for-12 shooting night on November 24 against the Chicago Bulls. It was the first time in his career he finished a game scoreless. On December 23, he scored 30 points and hit the go-ahead layup with 14 seconds remaining to help the Timberwolves defeat the Oklahoma City Thunder 114–112. He topped that total with 31 points on January 2 against the Boston Celtics. On January 6, he scored 25 of his 28 points in the first half of the Timberwolves' 108–86 win over the Los Angeles Lakers. Two days later, he had a season-high 40 points and 10 rebounds in a 119–117 win over the Thunder. On January 18 against the San Antonio Spurs, Wiggins passed Sam Mitchell (7,161) for second place on the franchise's career scoring list. On January 27, he scored a game-high 35 points in a 125–111 loss to the Jazz.

On October 11, 2017, Wiggins signed a five-year, $148 million contract extension with the Timberwolves. On October 22, he scored 27 points and hit the game-winning, buzzer-beating three-pointer to lift the Timberwolves to a 115–113 win over the Oklahoma City Thunder. On January 20, 2018, he scored 22 of his season-high 29 points in the first half of the Timberwolves' 115–109 win over the Toronto Raptors. Two days later, he set a new season high with 40 points in a 126–118 win over the Los Angeles Clippers. On February 7, 2018, in a 140–138 overtime loss to the Cleveland Cavaliers, Wiggins reached 6,000 career points. At 22 years, 349 days, he became the sixth-youngest player to reach the plateau. By the end of the season, Wiggins finished with a scoring average of 17.7 PPG, his lowest since his rookie year.

Wiggins and his girlfriend Mychal have two daughters, born in 2018 and 2021.

Wiggins grew up in Canada before attending his last two years of high school in the United States, where he was named a McDonald's All-American. At Kansas, he was named a second-team consensus All-American before becoming the second Canadian to be selected No. 1 overall in an NBA draft. After a preseason trade to the Minnesota Timberwolves, Wiggins earned NBA Rookie of the Year honors for the 2014–15 season. After five and a half seasons with Minnesota, he was traded to Golden State in 2020. In 2022, Wiggins won his first NBA championship and was selected for his first NBA All-Star game, and was named a Western Conference starter. He has also been a member of the Canadian national team.

On January 18, 2020, Wiggins achieved his first career triple-double with 18 points, 10 rebounds, and a career-high 11 assists.

On February 6, 2020, Wiggins and two draft picks were traded to the Golden State Warriors in exchange for Jacob Evans, D'Angelo Russell and Omari Spellman. Wiggins scored 24 points and had five steals in his debut for the Warriors, in a 125–120 loss to the Los Angeles Lakers. The Warriors failed to qualify for the playoffs and finished with a 15–50 record, the worst in the league.

On March 19, 2021, Wiggins scored a season-high 40 points, alongside eight rebounds, four assists and four steals, in a 116–103 win over the Memphis Grizzlies. The Warriors qualified for the newly implemented play-in tournament; however, they suffered two straight losses to the Los Angeles Lakers and Memphis Grizzlies, failing to reach the postseason for the second straight season despite a 22-point, 10-rebound double-double from Wiggins in their loss to the Grizzlies.

On December 6, 2021, Wiggins scored 28 points on a career-high eight threes made, in a 126–95 win over the Orlando Magic. On January 27, 2022, he was named a Western Conference starter for the 2022 NBA All-Star Game, his first All-Star selection. He was the third first-time All-Star to be voted a starter in his eighth season or later. Wiggins also became the first No. 1 overall draft pick in the modern draft era (since 1966) to earn their first All-Star selection in their eighth season or later. On May 22, during Game 3 of the Western Conference Finals, Wiggins scored a playoff career-high 27 points and tied his then playoff career-high with 11 rebounds in a 109–100 Game 3 win over the Dallas Mavericks.