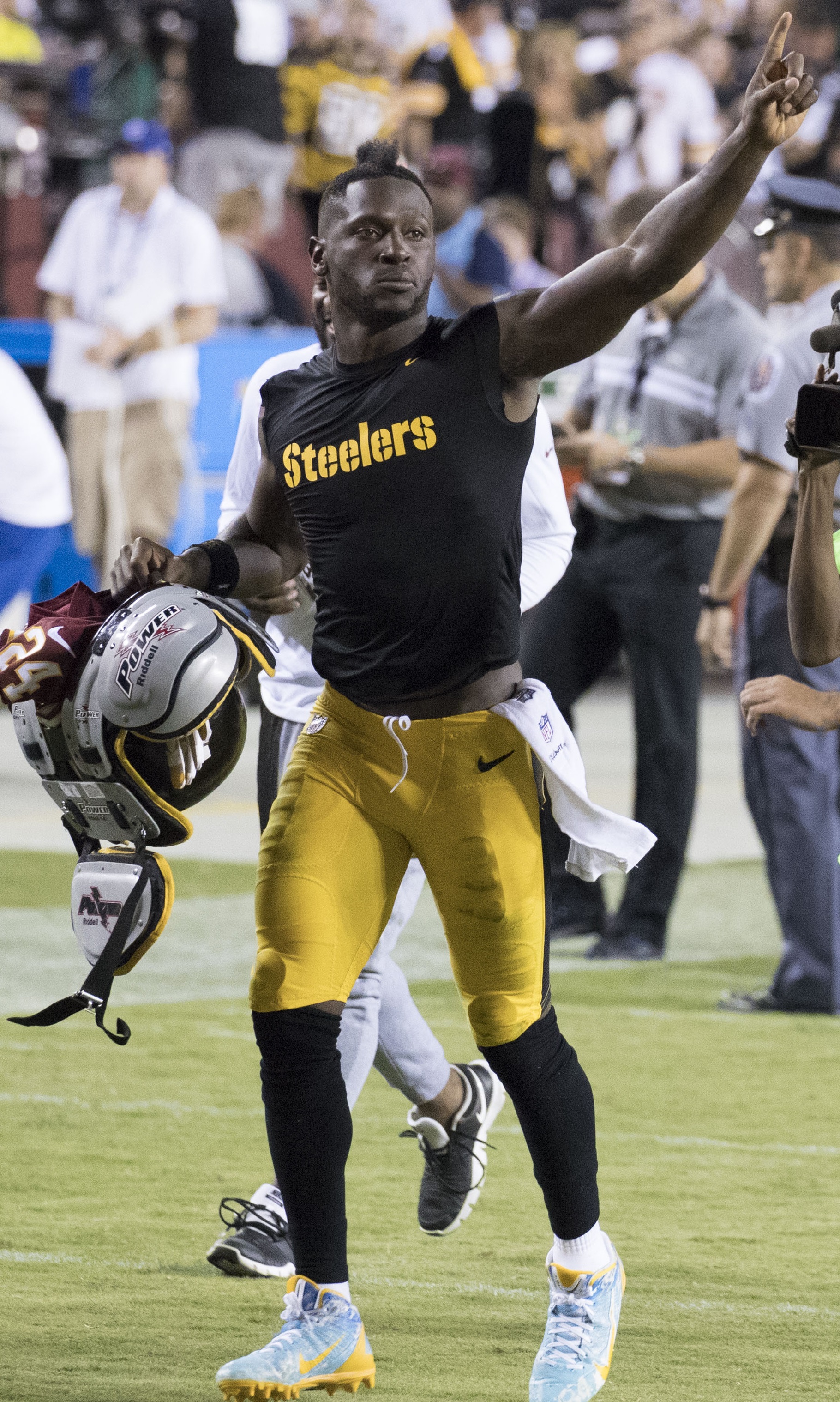 Brown started in the Steelers' season-opening 28–21 loss to the New England Patriots and caught nine passes for 133 yards and a touchdown. The following week, he had nine receptions for 195 yards and a touchdown, in a win over the San Francisco 49ers. This brought his career total to 5,587 yards, good for 200th on the NFL's all-time receiving yards list. He also moved past Steelers' legend Lynn Swann on the all-time list. On November 8, Brown caught a career-high 17 passes for a career-high 284 yards in a win over the Oakland Raiders. His 284 receiving yards broke Keenan McCardell's mark of 232 in 1996 for most receiving yards in a game without a receiving touchdown. On December 6, he caught eight passes for 118 yards and two touchdowns in a win over the Indianapolis Colts. This game is particularly notable for a play in which Brown returned a punt for a touchdown and then proceeded to leap onto the goalpost. He was flagged on the play for excessive celebration. On December 9, Brown was fined $11,576 by the NFL for the incident. For his efforts against the Colts, he earned his third career AFC Special Teams Player of the Week Award. In a Week 15 win over the Denver Broncos, he caught 16 passes for 189 yards and two touchdowns. For his performance against the Broncos, he was named as the AFC Offensive Player of the Week.

On December 22, Brown broke Yancey Thigpen's single-season team record of 1,398 receiving yards set in 1997. Brown also became the second Steeler to amass at least 100 receptions in a season, joining former teammate Hines Ward. On December 29, he, along with Pierre Garçon of the Washington Redskins, tied Jimmy Smith as the only players to record at least five receptions in every game of an NFL season. In addition, Brown became the only receiver in NFL history to record five receptions and at least 50 yards in every game of an NFL season. He finished the 2013 season with a total of 110 receptions for 1,499 yards and eight touchdowns. On December 27, 2013, Brown was selected for the Pro Bowl as a receiver and a punt returner. On January 3, 2014, Brown was named to the AP All-Pro team for the first time in his career. He was ranked 23rd by his fellow players on the NFL Top 100 Players of 2014.

Brown is the son of retired Arena Football League star Eddie Brown, who was named the best player in the league's history in 2006. He played wide receiver for the Albany Firebirds and collegiate football for Louisiana Tech.

Brown began attending Central Michigan in 2007 after wide receivers coach Zach Azzanni told him he could fly to Michigan and try out for the team as a walk-on wide receiver. Transitioning from the quarterback position in high school to wide receiver in college was not that difficult for him, and after a few weeks, Central Michigan coaches offered him a scholarship. Brown had difficulty adjusting to the college lifestyle, and being on time for meetings and practice. Azzanni and his wife helped him get situated and into an established routine, and he soon became like a part of their family. During his first season at Central Michigan, Brown played in 14 games. He played well enough to win the Mid-American Conference Freshman of the Year and was All-Conference as a returner. For his freshman season, he had 102 receptions for 1,003 yards and six touchdowns. His 102 receptions led the Mid-American Conference in 2007.

In his junior season against Akron on September 26, 2009, Brown had nine receptions for 89 yards and a season-high two touchdowns. For the 2009 season, he had five games with over 100 receiving yards. In his last regular season game on January 6, 2010, against Troy, Brown had a season-high 13 receptions for 178 yards. He finished 2009 with single-season bests of 110 receptions (also a school record), 1,198 receiving yards, and nine touchdowns. For his career at Central Michigan, he had a school-record 305 receptions, (including the top three seasons with the most receptions in school history), 3,199 receiving yards (fourth all-time), and 22 touchdowns (third all-time). On January 7, 2010, he announced he would forgo his senior season and enter the 2010 NFL Draft.

On September 19, 2010, Brown made his regular season debut against the Tennessee Titans and returned two kickoffs and a punt for 128 yards, including an 89-yard touchdown from a reverse on the first play of the game. On October 3, Brown made his first career catch for a six-yard gain during a 17–14 loss to the Baltimore Ravens. During a Week 17 contest against the Cleveland Browns, Brown made a season-high four catches for 52 yards in a 41–9 victory. He finished his rookie season with 16 receptions for 167 yards in ten games.

The Steelers finished the 2010 season with a 12–4 record and finished first in the AFC North. On January 15, 2011, Brown appeared in his first postseason game and caught a 58-yard pass from Ben Roethlisberger to set up the game-winning touchdown. He finished his first playoff game with a season-high 75 yards on three receptions as the Steelers defeated the Baltimore Ravens in the AFC Divisional Round, 31–24. The following week in the AFC Championship against the New York Jets, at the two-minute warning, Brown caught a 14-yard pass on 3rd & 6, sealing the 24–19 victory for the Steelers and advancing them to Super Bowl XLV. In his first Super Bowl, Brown handled four kickoff returns, four punt returns, and finished with one catch for a one-yard gain in the 31–25 loss to the Green Bay Packers.

With the retirement of Hines Ward during the off season, Brown entered training camp competing with Mike Wallace and Emmanuel Sanders to be the starting wide receivers. Brown and Wallace were subsequently named the starters at the position to begin the regular season. In December 2018, former Steelers safety Ryan Clark claimed that during a practice in 2012, Brown started shouting at defensive coordinator Dick LeBeau and began yelling at players on the defense, saying, "Don't touch me. I'm the franchise." In the Steelers' season opener against the Denver Broncos, Brown finished the 31–19 loss with four receptions for 74 yards. On September 23, Brown had seven receptions for 87 yards and a touchdown in the 34–31 loss to the Oakland Raiders.

The Steelers finished 12–4 and received a playoff berth. On January 8, 2012, Brown caught five passes for 70 yards and had one carry for 18 yards in a 29–23 overtime loss to the Denver Broncos in the AFC Wild Card Round.

In the Steelers' season opener against the Cleveland Browns, while returning a punt, Brown attempted to hurdle Cleveland Browns punter Spencer Lanning and kicked him in the facemask, garnering significant media attention. He finished the 30–27 victory with five receptions for 116 yards and later apologized for the kick, calling it an accident. On Brown was fined $8,200 for the kick. On October 20, Brown threw his first career touchdown pass, a three-yard strike to wide receiver Lance Moore. The following game, Brown caught ten passes for 133 yards and two touchdowns in a victory over the Indianapolis Colts. During a Week 9 contest against the Baltimore Ravens, Brown made a season-high 11 catches for a season-high 144 yards, including a 54-yard touchdown reception. In Week 17, against the Cincinnati Bengals, he had seven receptions for 128 yards and a touchdown to go along with a 71-yard punt return touchdown. His successful performance earned him AFC Special Teams Player of the Week. In 2014, Brown led the NFL in receptions (129), receiving yards (1,698), and was tied for second in touchdowns (13); all three were new team records. The Steelers made the playoffs and faced off against the Ravens in the Wild Card Round. In the 30–17 loss, he had nine receptions for 117 yards. His successful season garnered him a third Pro Bowl selection. He was ranked eighth by his fellow players on the NFL Top 100 Players of 2015.

On March 8, 2016, Brown was announced as one of the celebrities who competed on season 22 of Dancing with the Stars. He was paired with professional dancer Sharna Burgess. Brown and Burgess were eliminated during the semifinals of the show and finished the competition in fourth place overall.

On February 27, 2017, Brown signed a new five-year contract with the Steelers through the 2021 season. The contract was a four-year extension worth $68 million ($19 million guaranteed at signing) with a $17 million annual salary, making Brown the highest paid wide receiver in the NFL.

Brown is the father of four sons and a daughter. In 2018, he was featured in recording artist Drake's music video for "God's Plan". On July 18, 2018, Brown was announced as the cover athlete for Madden NFL 19. In September 2019, Brown re-enrolled for online classes at his alma mater, Central Michigan University.

He is also the cousin of Baltimore Ravens wide receiver Marquise Brown, who was drafted in 2019.

On January 3, 2019, Brown took part on the first season of the American version of The Masked Singer. He competed in the show wearing "The Hippo" costume and sang "My Prerogative" by Bobby Brown before being eliminated in the first episode.

On March 9, 2019, the Steelers agreed to trade Brown to the Oakland Raiders in exchange for a third and a fifth-round selection in the 2019 NFL Draft. The deal became official on March 13, 2019. Prior to the trade to Oakland, reports surfaced that the Steelers were "close to a deal" with the Buffalo Bills, but that the deal was cancelled after Brown protested on social media.

On September 7, 2019, the same day he was released by the Raiders, Brown agreed to a one-year contract with the New England Patriots worth up to $15 million, with a $9 million signing bonus. Additionally, on September 9, the Patriots added a second-year option in Brown's contract in which he would receive $20 million if picked up.

On September 10, 2019, Brown's former trainer Britney Taylor filed a lawsuit alleging he sexually assaulted her three times. She claimed that he exposed himself to her, ejaculated on her back, and finally raped her. Brown and his legal team denied the allegations. On September 16, a second woman accused him of sexual misconduct. Pittsburgh-based Dr. Victor Prisk, who Brown worked with while with the Steelers, also sued Brown for $11,500 in unpaid fees.

On January 13, 2020 the Hollywood Police department stated they no longer want Brown to be associated with their youth league (PAL). The Hollywood police department returned a check from Brown and issued a trespass order preventing him from being involved with their youth league while saying in a statement, "We do not want him to continue to affect our youth, or influence them in a negative way."