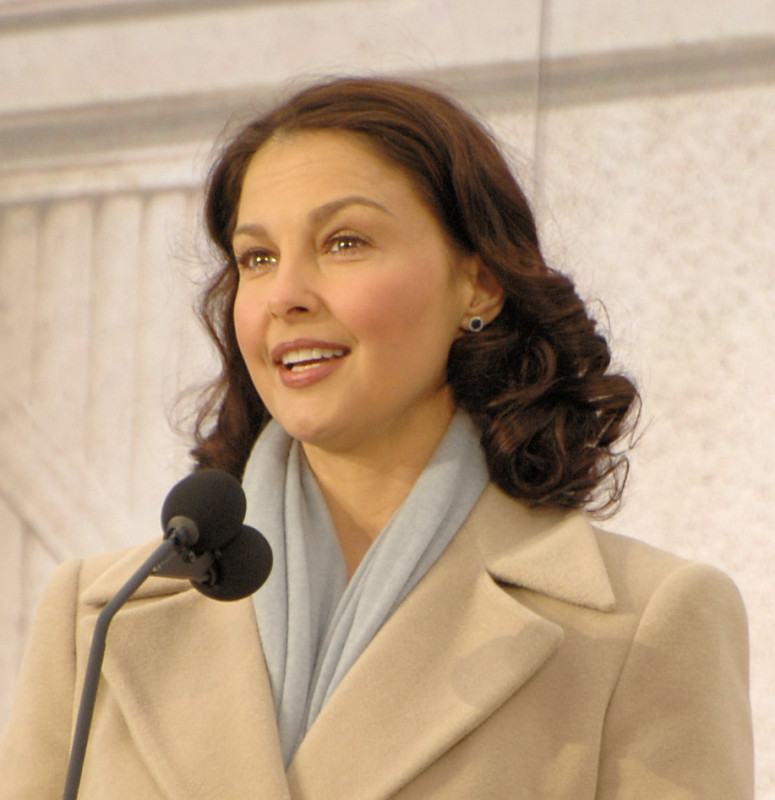 Ashley Judd (born Ashley Tyler Ciminella; April 19, 1968) is an American actress and political activist. She grew up in a family of performing artists: she is the daughter of country music singer Naomi Judd and the half-sister of Wynonna Judd. Her acting career has spanned more than three decades, and she has also become increasingly involved in global humanitarian efforts and political activism.

Judd was born in Granada Hills, Los Angeles. Her parents are Naomi Judd, a country music singer and motivational speaker, and Michael Charles Ciminella, a marketing analyst for the horseracing industry. Ashley's elder sister, Wynonna, is also a country music singer. Her paternal grandfather was of Sicilian (Italian) descent, and her paternal grandmother was a descendant of Mayflower pilgrim William Brewster. At the time of her birth, her mother was a homemaker; she did not become well known as a singer until the early 1980s. Judd's parents divorced in 1972. The following year, her mother took Ashley back to Naomi's native Kentucky, where Judd spent the majority of her childhood.

Starting in 1991, Judd appeared as Ensign Robin Lefler, a Starfleet officer, in two episodes of Star Trek: The Next Generation, "Darmok" and "The Game". From 1991 to 1994, she had a recurring role as Reed, the daughter of Alex (Swoosie Kurtz), on the NBC drama Sisters.

She made her feature film debut with a small role in 1992's Kuffs. In 1993, she fought for and was cast in her first starring role playing the title character in Victor Nuñez's Sundance Film Festival Grand Jury Prize dramatic winner Ruby in Paradise. Convinced that this role would shape the rest of her career, Judd was extremely nervous for the audition, nearly getting into a car accident en route. "From the first three sentences, I knew it was written for me", she told the San Jose Mercury News. She received rave reviews playing Ruby Lee Gissing, a young woman trying to make a new life for herself, and it was this performance that would launch her career as an actress. Nuñez told author James L. Dickerson that the resonance of the character was Judd's creation: "The resonance, those moments, was not contrived. It was just a matter of creating the scene and trusting that it was worth telling."

Oliver Stone, who had seen her in Nuñez's film, cast Judd in Natural Born Killers, but her scenes were later cut from the version of the film released theatrically. The following year, she gained further critical acclaim for her role as Harvey Keitel's estranged daughter in Wayne Wang's Smoke and also as Val Kilmer's wife in Michael Mann's Heat. That same year she also played the role of Callie in Philip Ridley's dark, adult fairy tale, The Passion of Darkly Noon. In 1996, she co-starred with Mira Sorvino as Marilyn Monroe in Norma Jean and Marilyn, where she recreated the photo shoot for the centerfold for the first issue of Playboy. The same year she had a supporting role in the court room thriller film A Time to Kill (1996) which received positive reviews and was a major box office success. By the end of the 1990s, Judd had managed to achieve significant fame and success as a leading actress, after leading roles in several thrillers that performed well at the box office, including Kiss the Girls in 1997 and 1999's Double Jeopardy.

In December 1999, Judd became engaged to Scottish racing driver Dario Franchitti, who was driving in CART. Since the demise of CART, Franchitti has raced in IndyCar and NASCAR. They married in December 2001 at Skibo Castle in Scotland. They had no children because Judd is an antinatalist: "It's unconscionable to breed with the number of children who are starving to death in impoverished countries." They divorced in 2013.

In the early 2000s she starred in Where the Heart Is (2000), Someone Like You (2001), and High Crimes (2002). These films were moderate box office successes, and the film Divine Secrets of the Ya-Ya Sisterhood (2002) performed well at the box office. In 2002 she also starred in the critically acclaimed film Frida. In 2004 she received positive recognition, and a Golden Globe nomination for Best Actress, for her performance in the biography of Cole Porter, De-Lovely, opposite Kevin Kline. She also starred in Twisted, the worst-reviewed movie of 2004, which was widely panned.

Starting in 2004, Judd was the advertising "face" of American Beauty, an Estée Lauder cosmetic brand sold exclusively at Kohl's department stores, and H. Stern jewelers. In June 2007, Goody's Family Clothing launched three fashion clothing lines with Judd in the fall to be called "AJ", "Love Ashley" and "Ashley Judd". In 2008 they added an "Ashley Judd Plus" line.

In February 2006, she entered a program at Shades of Hope Treatment Center in Buffalo Gap, Texas, and stayed for 47 days. She was there for treatment of depression, insomnia, and codependency.

Judd is active in humanitarian and political causes. She was appointed Global Ambassador for YouthAIDS, an education and prevention program of the international NGO Population Services International (PSI), promoting AIDS prevention and treatment. Judd was honored November 10, 2009, as the recipient of the fourth annual USA Today Hollywood Hero, awarded for her work with PSI. On October 29, 2006, Judd appeared at a "Women for Ford" event for Democratic Tennessee Senate candidate Harold Ford Jr. She has also campaigned extensively locally and nationally for a variety of Democratic candidates, including President Barack Obama in critical swing states.

By May 2007, Judd completed a bachelor's degree at the University of Kentucky. She was awarded an Honorary Doctor of Humane Letters from Union College in Barbourville Kentucky, on May 9, 2009. She subsequently earned a Mid-Career Master of Public Administration degree (MC/MPA) from the John F. Kennedy School of Government at Harvard University in 2010.

In 2008, Judd supported Barack Obama's presidential campaign. In 2009, she appeared in a one-minute video advertisement for the Defenders of Wildlife Action Fund, in which Judd condemned Alaska governor Sarah Palin for supporting aerial wolf hunting. In response, Palin stated the reason these wolves are killed is to protect the caribou population in Alaska. Palin called the Defenders of Wildlife Action Fund an "extreme fringe group". In 2010, Judd signed the Animal Legal Defense Fund's petition to urge Governor Steve Beshear to protect Kentucky's homeless animals through tough enforcement of the state's Humane Shelter Law.

In 2010, Judd was Janet Tamaro’s original choice for the role of Detective Jane Rizzoli in the TV series Rizzoli & Isles but declined and the role was given to Angie Harmon instead. In 2011, Judd co-starred with Patrick Dempsey in the film Flypaper. In 2012, she starred as Rebecca Winstone on the ABC series Missing. In 2014, she appeared as Natalie Prior in Divergent, which she reprised in the 2015 sequel Insurgent.

On September 8, 2010, CNN interviewed Judd about her second humanitarian mission to the Democratic Republic of Congo. Judd traveled with the Enough Project, a project to end genocide and crimes against humanity. In the interview, Judd discussed her efforts to raise awareness about how conflict minerals fuel sexual violence in Congo. During her trip, Judd visited hospitals for victims of sexual violence, camps for displaced persons, mines, and civil society organizations. On September 30, 2010, CNN published an op-ed titled "Ashley Judd: Electronics fuel unspeakable violence" by Judd and Enough Project co-founder John Prendergast regarding the continued violence in Congo. On November 26, 2010, she published a subsequent op-ed, "Costs of Convenience", excerpted from her trip diary from eastern Congo. These pieces discussed the recent provision in the Dodd-Frank Reform bill that requires companies to prove where their minerals originated, and the link between modern electronics (which rely on those minerals) and mining camps plagued by such violence.

In 2011, Judd released her memoir All That is Bitter and Sweet, in which she talks about her trials and tribulations from adolescence to adulthood.

In 2011, she joined the Leadership Council of the International Center for Research on Women. Other organizations Judd has been involved with include Women for Women International and Equality Now. She is also a member of the advisory board for Apne Aap Women Worldwide, an organization fighting sex-trafficking and inter-generational prostitution in India.

In February 2013, she invited her Twitter followers to join a mailing list, hinting that she might ultimately announce a run for the Senate to those on the list. However, she announced on her Twitter feed on March 27, 2013, that she would not run, citing her "need to be focused on my family". Judd endorsed Alison Lundergan Grimes, Secretary of State of Kentucky after she announced her candidacy.

In 2014, Judd was the narrator of the documentary film about Turkish preacher Fethullah Gülen, Love is a Verb, directed by Terry Spencer Hesser. The following year she became the first woman to narrate the opening for the telecast of the Kentucky Derby.

Judd represented Tennessee as a delegate to the 2012 Democratic National Convention. She also considered returning to Kentucky and challenging U.S. Sen. Mitch McConnell in 2014. In response, the Conservative Super PAC "American Crossroads" released an attack ad against Judd in Kentucky.

In October 2015, Judd told Variety that she had been sexually harassed by a studio mogul, but did not name the person. In October 2017, she said the person was Harvey Weinstein, co-founder of Miramax, and said that the sexual harassment occurred during the filming of Kiss the Girls.

For more than a decade, Judd's humanitarian work has focused on gender equality and the sexual and reproductive health and rights of women and girls. In 2016, she was appointed a Goodwill Ambassador for UNFPA, the United Nations agency charged with sexual and reproductive health (among other things). As of May 2018, she had so far visited UNFPA's projects for women and girls affected by humanitarian crises in Jordan, Turkey, Ukraine, and Bangladesh, and its development work in India and Sri Lanka.

In August 2016, Judd enrolled at UC Berkeley to pursue a PhD in Public Policy at the Goldman School of Public Policy, but took a medical leave of absence two months later due to siege migraines.

On April 30, 2018, a defamation and sexual harassment lawsuit was filed by Judd against Harvey Weinstein stating that he hurt her career by spreading lies about her after she rejected his sexual advances. Weinstein filed a motion to dismiss in July. In January 2019, a federal judge in California dismissed Judd's claim of sexual harassment against Weinstein. The judge allowed Judd to pursue her defamation claim that Weinstein sabotaged her career.

At the Women in the World summit in April 2019, while addressing Georgia's fetal heartbeat bill passed in March 2019, Judd discussed being raped three times, one resulting in conception. She stated, "As everyone knows, and I'm very open about it, I'm a three-time rape survivor," Judd said. "One of the times that I was raped there was conception and I'm very thankful I was able to access safe and legal abortion. Because the rapist, who is a Kentuckian, as am I, and I reside in Tennessee, has paternity rights in Kentucky and Tennessee. I would've had to co-parent with my rapist."

In February 2021, while hiking in the jungle in the Democratic Republic of Congo, Judd shattered her leg and spent 55 hours journeying with the help of African porters to get to surgery in a hospital in South Africa.