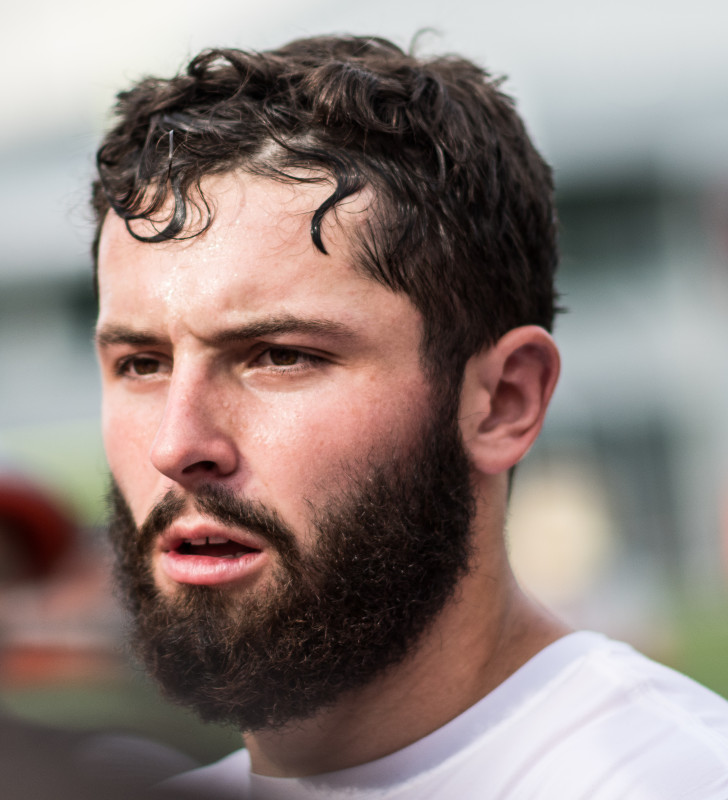 Mayfield played in his first NFL game in Week 3 against the New York Jets, replacing an injured Tyrod Taylor with the Browns down 14–0. Mayfield went 17 of 23, passing for 201 yards as the Browns came back and prevailed 21–17, ending their winless streak at 19 games. Mayfield became the first player since Fran Tarkenton in 1961 to come off the bench in his debut, throw for more than 200 yards, and lead his team to its first win of the season.

Baker Reagan Mayfield (born April 14, 1995) is an American football quarterback for the Carolina Panthers of the National Football League (NFL). Following a stint with Texas Tech, Mayfield played college football at Oklahoma, where he won the Heisman Trophy as a senior. He was selected first overall by the Cleveland Browns in the 2018 NFL Draft.

Mayfield was born on April 14, 1995, in Austin, Texas, to James and Gina Mayfield as the second of two sons. James, a private equity consultant, encountered financial difficulties during his younger son's senior year in high school. These struggles forced the Mayfields to sell their family home and move from rental home to rental home.

In his first start against SMU, Mayfield passed for 413 yards and four touchdowns. His 43 completions of 60 attempts broke a school record held by Billy Joe Tolliver, and fell only four completions short of the NCAA Division I FBS single-game record for completions by a freshman, held by Luke McCown. For his performance, Mayfield was named Big 12 Conference Offensive Player of the Week – the first freshman Texas Tech quarterback to be named so since former Red Raider head coach Kliff Kingsbury in 1999. The game featured the last four former Lake Travis quarterbacks combined on both teams: Garrett Gilbert, Michael Brewer, Collin Lagasse, and Mayfield.

Mayfield started for the first time in the Browns' next game, making him the 30th starting quarterback for the Browns since their return to the NFL in 1999, in a 42–45 overtime loss to the Oakland Raiders. In Week 5, Mayfield threw for 342 passing yards and one touchdown as he earned his first victory as a Browns' starter, in a 12–9 overtime win over the Baltimore Ravens. In Week 10, Mayfield led the Browns to a 28–16 victory over the Atlanta Falcons. throwing for 216 yards, three touchdowns, and a passer rating of 151.2, with no turnovers. The following week, Mayfield led the Browns to their first away win since 2015, against the Cincinnati Bengals. He completed 19 of 26 passes for 258 yards and four touchdowns. In Week 12, in a 29–13 loss to the Houston Texans, Mayfield passed for 397 yards, one touchdown, and three interceptions. Mayfield bounced back in the following game, a 26–20 victory over the Carolina Panthers, going 18 of 22 for 238 passing yards and one touchdown.

While Mayfield was considered by many to be the favorite for Offensive Rookie of the Year for 2018, the award was given to Giants running back Saquon Barkley. On the annual Top 100 Players list for 2019, Mayfield's peers named him the 50th best player in the league, one spot behind teammate Myles Garrett. He was named 2018 PFWA All-Rookie, the second Cleveland quarterback to receive this honor since Tim Couch in 1999.

Mayfield recorded his first game of the season with two or more passing touchdowns in Week 10 against the Buffalo Bills, completing 26 of 38 passes for 238 yards and two touchdowns, including the game-winner to Rashard Higgins, as the Browns snapped a four-game losing streak with a 19–16 win. Four days later against the Pittsburgh Steelers and former Big 12 Conference rival Mason Rudolph, Mayfield recorded his first career win against Pittsburgh, accounting for three total touchdowns (2 passing, 1 rushing) as Cleveland won 21–7. In Week 12 against the Miami Dolphins, Mayfield threw for 327 yards, three touchdowns, and one interception in the 41–24 win. In Week 17 against the Cincinnati Bengals, Mayfield became the first Cleveland Browns QB to start all 16 games in a season since Tim Couch in 2001. In the game, Mayfield threw for 279 yards, three touchdowns, and three interceptions as the Browns lost 33–23. Mayfield finished the 2019 season with 3,827 passing yards, 22 touchdowns, and 21 interceptions as the Browns finished with a 6–10 record.

After playing for Texas Tech, Mayfield transferred to the University of Oklahoma in January 2014, but had not contacted the Sooners coaching staff. Mayfield further elaborated in an interview with ESPN that he sought to transfer due to scholarship issues and a perception that he had earned the starting position and that further competition was not "really fair." The alleged scholarship issues were denied by Texas Tech coach Kliff Kingsbury.

In February 2014, Oklahoma head coach Bob Stoops confirmed that Mayfield would be walking on for the Oklahoma Sooners. Mayfield was not eligible to play until the 2015 season, and he lost a season of eligibility due to Big 12 Conference transfer rules following an unsuccessful appeal of his transfer restrictions.

When Mayfield transferred from Texas Tech to Oklahoma after his freshman year, he filed an appeal to the NCAA to allow him to be eligible to play immediately at Oklahoma on the basis that he was a walk-on and not a scholarship player at Texas Tech; therefore, the transfer rules that apply to scholarship players should not be applicable to his situation. The NCAA denied his appeal as he did not meet the criteria. Big 12 Conference rules additionally stipulate that intra-conference transfers will lose one year of eligibility over and beyond the one-year sit-out imposed by the NCAA. Mayfield attempted to appeal his initial loss of eligibility to the Big 12 Conference faculty athletics representatives but was denied in September 2014.

On August 24, 2015, Mayfield was named the starting quarterback for the Sooners after winning an open quarterback competition against Trevor Knight. On September 6, 2015, Mayfield started against Akron. Mayfield totaled 388 passing yards with three passing touchdowns on 23 completions in the 41–3 win. In the second game of the 2015 season, Mayfield started at Tennessee at Neyland Stadium. The Sooners were ranked 19th at the time and the Volunteers were ranked 23rd. Mayfield started off very slow in the game, not even reaching midfield until the 13-minute mark of the fourth quarter. Oklahoma came back from a 17-point deficit to win the game by a score of 31–24 in double overtime. Mayfield threw for 187 yards and three touchdowns on 19 completions while throwing two interceptions early in the game. In the third game of the season, Mayfield started against Tulsa. He had a career day, throwing for 487 yards and four touchdowns, including 316 yards in the first half. Mayfield also ran for 85 yards and two touchdowns in the 52–38 win.

On June 1, 2016, the Big 12 faculty athletic representatives voted against a rule proposal that would have allowed walk-on players to transfer within the conference and not lose a year of eligibility. The next day, the rule proposal was amended to allow walk-on players, without a written scholarship offer from the school they are transferring from, to transfer within the conference without losing a season of eligibility. The faculty athletic representatives approved the amended proposal with a vote of 7–3. The rule change made Mayfield eligible to play for Oklahoma through the 2017 season. Texas Tech voted in favor of the rule.

In December 2016, it was announced that Mayfield and his top receiving target, Dede Westbrook, would be finalists for the 2016 Heisman Trophy. It was also announced that they would play in the 2017 Sugar Bowl. Mayfield ended up finishing third in the Heisman voting.

On February 25, 2017, Mayfield was arrested in Washington County, Arkansas on charges of public intoxication, disorderly conduct, and fleeing and resisting arrest. At 2:29 a.m. that Saturday, a police officer was flagged down on an assault and battery report. The person who flagged the officer was yelling at Mayfield. The preliminary police report described Mayfield as unable to walk straight, having slurred speech and food covering the front of his shirt. When he was asked to stay so the police could get a statement, Mayfield began shouting obscenities and "causing a scene". Mayfield was booked at 8:21 a.m. local time on the misdemeanor charges. He had a court date on April 7 for the public intoxication charge, he pleaded not guilty to all charges. On June 15, 2017, the University of Oklahoma ordered Mayfield to undergo 35 hours of community service along with completing an alcohol education program.

On September 9, 2017, after a win against the Ohio State Buckeyes in Columbus, Mayfield planted the Sooners' flag in the middle of the painted "O" at Ohio Stadium, causing a major public backlash. Mayfield issued an apology shortly afterwards.

In November 2017, Mayfield was under fire again after an interaction during the game against Kansas. Mayfield was seen grabbing his crotch and mouthing "Fuck you!" at the coach of the opposing team. He also told their fans to "Go cheer on basketball." In response, Mayfield issued another public apology. Days after the 41–3 victory over Kansas, Sooners head coach Lincoln Riley announced that Mayfield would not start or be the captain during the upcoming game against West Virginia due to his actions against Kansas.

On November 4, 2017, Mayfield threw for a school-high 598 yards against in-state rival Oklahoma State. Mayfield finished 24-for-36 with five passing touchdowns and one rushing touchdown, and Oklahoma won the game by a score of 62–52. Mayfield completed his career 3–0 as the starting Oklahoma quarterback in the Bedlam Series.

On December 2, 2017, with the return of the Big 12 Championship Game after a six-year hiatus, Mayfield led Oklahoma to its third straight Big 12 championship, with Oklahoma beating the TCU Horned Frogs 41–17. Mayfield won MVP honors while Oklahoma clinched a second playoff berth in three years. A month later, the Sooners lost to the Georgia Bulldogs 54–48 in the 2018 Rose Bowl, which served as the national semifinal game.

On December 9, 2017, Mayfield won the 2017 Heisman Trophy with a sweeping majority. He received 732 first-place votes and a total of 2,398 points. This amount translated to 86% of the possible points and the third highest percentage in Heisman history. In addition, Mayfield became the first and only walk-on player to ever win the Heisman Trophy.

The Browns exercised Mayfield's fifth-year contract option for the 2022 season on April 23, 2021, worth $18.9 million guaranteed. On October 7, 2021, it was revealed that Mayfield was playing with a partially torn labrum which he suffered during the Browns Week 2 victory over the Houston Texans. Mayfield continued to play with the injury until reaggravating it in Week 6 against the Arizona Cardinals. Due to the injury, Mayfield was ruled out for the Browns' Week 7 game against the Denver Broncos, missing his first game since taking over as the Browns' starter in 2018. On November 14, 2021, Mayfield suffered a right knee contusion during their crushing Week 10 loss to the Patriots. While the injury was not severe, coach Kevin Stefanski decided not to put him in for the rest of the game due to Mayfield absorbing hits and the game being out of reach. After the Browns were eliminated from the postseason following a Week 17 loss to the Pittsburgh Steelers, the Browns announced Mayfield would undergo surgery on the torn labrum, ending Mayfield's season. He was placed on injured reserve on January 5, 2022. Mayfield threw for 3,010 yards, 17 touchdowns, and 13 interceptions in 14 games played.

The Cleveland Browns selected Mayfield with the first overall pick in the 2018 NFL Draft. Mayfield signed a four-year rookie contract with the Browns on July 24, 2018, with the deal worth $32.68 million in guaranteed salary.

Mayfield set the rookie quarterback record for passing touchdowns, along with ending a 19-game winless streak for the Browns in his debut. His most successful season was in 2020 when he led the Browns to their first playoff appearance since 2002 and victory since 1994. However, due to inconsistent play and conflict with Browns management, Mayfield was traded to the Panthers in 2022.

On July 6, 2022, Mayfield was traded to the Carolina Panthers for a 2024 conditional fifth-round draft pick.

Mayfield competed against Sam Darnold for the starting position with the team. On August 22, 2022, Mayfield was named the Week 1 starter for the Panthers for their game against the Cleveland Browns. Against the Browns, Mayfield threw for 235 yards, a touchdown, and an interception in the 26–24 loss despite a late rally.