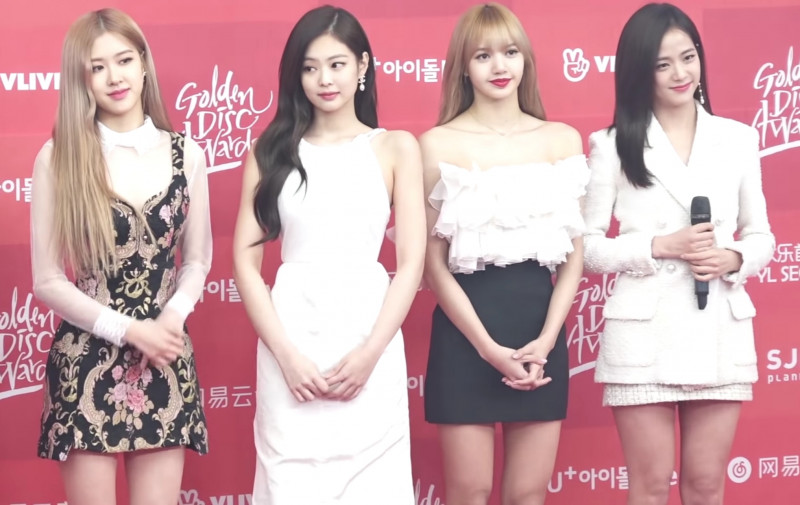 On June 15, 2018 the group released their first EP titled Square Up. The single "Ddu-Du Ddu-Du" from the EP debuted at number 17 on the Official Trending Chart in the United Kingdom, making them the first female K-pop group to enter the chart since its launch in 2016. The single also debuted as the highest-charting Hot 100 hit ever by an all-female K-pop act, opening at number 55 with 12.4 million U.S. streams and 7,000 downloads in the tracking week ending June 21, 2018. The single also debuted at number 39 on the US Streaming Songs tally, where Blackpink became the first K-pop girl group to chart a title. Square Up also brought the group their first entry and the highest-charting to date (2018) by an all-female K-pop group on the US Billboard 200, debuting at number 40 with 14,000 album-equivalent units, surpassing label mate 2NE1's 2014 record with their last album Crush which peaked at number 61. The EP also topped the Billboard World Albums chart. In South Korea, Square Up debuted at number one on Gaon Albums Chart. The single "Ddu-Du Ddu-Du" peaked at number one on the Digital, Download, Streaming and Mobile charts on Gaon in its second week, while "Forever Young" peaked at number two. YouTube's official tally saw the music video for "Ddu-Du Ddu-Du" garner a total of 36.2 million views within 24 hours after its release, making it the most viewed online video in the first 24 hours by a Korean act and the second most watched music video of all time in first 24 hours at the time.

Promotional preparations began in August 2016 with the release of teaser images and their participation in songs and advertisements. YG Entertainment revealed the final line-up and name of the group on June 29, 2016.

Blackpink was the first girl group to debut under YG Entertainment in six years after 2NE1, with their debut single album Square One, which was released on August 8, 2016 with the lead singles "Boombayah" and "Whistle". The two singles charted at number one and two on the Billboard World Digital Songs chart, and Blackpink is the fastest act to do so and the third Korean artist or group to hold the top two positions after label mates Psy and Big Bang. "Whistle" topped the digital, download, streaming, and mobile charts on Gaon in August 2016. They also reached number one on the weekly, popularity, music video, and K-pop music video charts of China's biggest music-streaming website QQ Music. Blackpink's first music show performance was aired on August 14, 2016 on SBS' Inkigayo. They won first place on Inkigayo 13 days after their debut, and broke the record for the shortest time for a girl group to win on a music program after their debut. They wrapped up their promotions for Square One on September 11, 2016 with another win on Inkigayo.

Blackpink (Hangul: 블랙핑크; commonly stylized as BLACKPINK or BLΛƆKPIИK) is a South Korean girl group formed by YG Entertainment, consisting of members Jisoo, Jennie, Rosé, and Lisa. The group debuted on August 8, 2016, with their single album Square One, which spawned "Whistle", their first number-one song in South Korea, as well as "Boombayah", their first number-one hit on the Billboard World Digital Songs chart. With the group's early commercial success, they were hailed as the New Artist of the Year at the 31st Golden Disc Awards and the 26th Seoul Music Awards.

On January 17, 2017 Blackpink named their fan club "Blink", a portmanteau of "Black" and "Pink". On June 22, The group released a digital single titled "As If It's Your Last". The song was described as a "mixed genre of music", a change of sound from their previous releases. The song debuted at number one on Billboard's World Digital Song chart dated June 22 after only one day of tracking, making it their third number one hit on the chart. The music video for the song later went on to break the record for the most liked music video by a Korean girl group on YouTube.

On July 20, 2017, Blackpink held a showcase at Nippon Budokan in Tokyo. It had an attendance of more than 14,000 people and it was reported that around 200,000 people tried to get tickets for it. The group made their Japanese debut on August 30, 2017, with the release of their self-titled Japanese extended play, including Japanese versions of their previous singles. Blackpink was ranked among YouTube's Global Top 25 Songs of the Summer for 2017, with their single "As If It's Your Last".

In January 2018, it was announced that the debut Japanese EP of the group would be re-released under the name Re:Blackpink. The digital version included the same songs as the original release, while the physical version included a DVD containing all music videos and six songs in the Korean language.

On July 28, 2018, the group ranked first for brand reputation based on analysis by The Korea Reputation Research Institute.

In September 2018, English singer Dua Lipa announced "Kiss and Make Up", a collaboration with Blackpink for the re-released Complete Edition of her self-titled debut album released on October 19, 2018. "Kiss and Make Up" debuted at number 93 at the Billboard Hot 100, marking Blackpink's second entry in the chart, and making them the only Korean girl group to score multiple entries on the chart. The song is also their second song in the UK Singles Chart, peaking at number 36. It is also their first Top 40 entry, thus, making them the first female K-pop group and third Korean act overall to reach the chart's Top 40.

In October 2018, YG CEO Yang Hyun-suk announced that each Blackpink member would have solo projects, with Jennie debuting first and Rosé next. That month, the group signed with Interscope Records for a global partnership with YG Entertainment; they would be represented by Interscope and Universal Music Group outside of Asia. In November 2018, Blackpink announced additional tour dates for their In Your Area World Tour, which covers thirteen dates around Asia from January through March 2019. Jennie debuted her solo single, "Solo", at Blackpink's Seoul concert on November 11; both the song and its official music video were released the following day. Their first Japanese studio album, Blackpink in Your Area, was made available digitally on November 23, and physically on December 5, 2018. The album included Japanese versions of all of their previously released material and debuted at number 9 on the Japanese album chart, selling an estimated 13,000 copies in its first week.

Blackpink is the highest-charting female K-pop act on both Billboard Hot 100 and Billboard 200, peaking at number 41 with "Kill This Love", and peaking at number 24 with Kill This Love, respectively. They are also the first and only K-pop girl group to enter and top Billboard's Emerging Artists chart. They are also the first female K-pop group to have four number-one singles on Billboard's World Digital Song Sales chart. At the time of its release, "Ddu-Du Ddu-Du" was the most-viewed Korean music video in the first 24 hours on YouTube, and in January 2019, it became the most viewed music video by a K-pop group on the website. As of September 2019 , Blackpink is the most-subscribed music group on YouTube.

Blackpink made their American debut at Universal Music Group's 2019 Grammy Artist Showcase, which was invite-only and took place at ROW in Downtown Los Angeles on February 9. The group then appeared on several American television shows in February 2019. Billboard's March 2019 issue had five covers: a group cover and four with each individual member. They are the first K-pop girl group to be on the magazine's cover.

In April 2019, Blackpink made a donation of 40 million won to the Hope Bridge Association of the National Disaster Relief for the victims of the Sokcho wildfire in South Korea.

Blackpink's second EP, Kill This Love, featuring a single of the same name, was released on April 5, 2019. Blackpink performed at the 2019 Coachella Festival on April 12 and 19, 2019, being the first female K-pop group to perform at Coachella. The EP debuted at no. 24 on the Billboard 200, while the single reached no. 41 on the Billboard Hot 100, becoming the highest charting releases by a female Korean act on the Billboard charts. "Kill This Love" made it on to Billboard's staff-curated list of the 100 Best Songs of 2019, at No. 66, with Billboard writing, "If there were doors remaining for Blackpink to bust through, they were evaporated by the first horn blasts of 'Kill This Love', a song that sounds practically biblical in its sonic might."

On November 22, 2019, Blackpink reached 9,604,061 followers on Spotify, surpassing Fifth Harmony and Little Mix, breaking the record as the most followed girl group.

The song "Forever Young", released as a track from the EP Square Up (2018), surpassed 2.5 million downloads on December 2019, making it the group's fifth song overall and their second to achieve a Platinum certification for downloads from the Korea Music Content Association (KMCA).

On April 22, it was confirmed the group would be featured on Lady Gaga's sixth studio album Chromatica, on the track titled "Sour Candy", set to release May 29, 2020. On May 18, YG announced the group would release a pre-release single in June followed by an additional release between July and August to promote their first Korean full-length album containing at least 10 tracks in September.