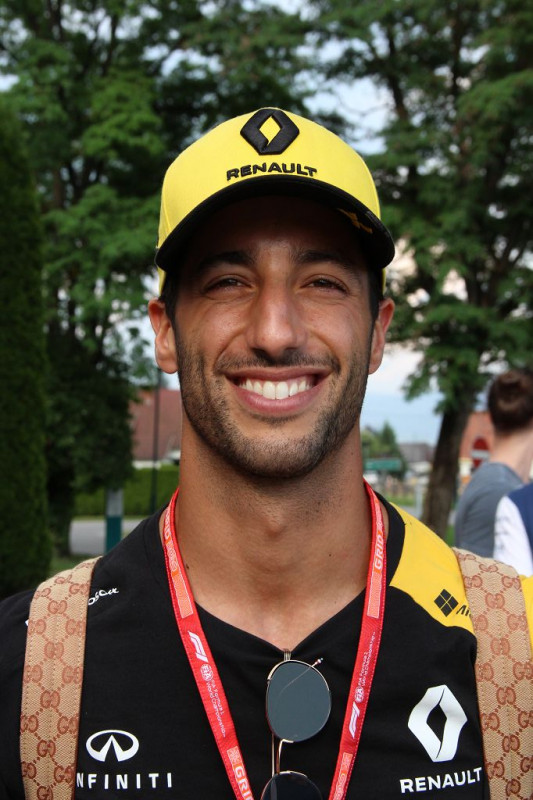 Ricciardo won the Hungarian Grand Prix on 27 July, ahead of Alonso and Lewis Hamilton. He was in third place behind Alonso and Hamilton with less than four laps remaining and overtook Hamilton's Mercedes with a pass on the outside of the Hungaroring's turn two. He then easily caught and passed Alonso's Ferrari as he had very little grip left on his tyres – television footage of his left front tyre after the race showed it to be badly blistered. In the final two laps, Ricciardo pulled away to win the race by 5.225 seconds. His teammate Vettel survived a spin coming onto the main straight late in the race to finish seventh. Ricciardo became the second Australian to win the Hungarian Grand Prix, after Mark Webber's victory – also for Red Bull – in 2010. Ricciardo then went on to score his third victory of his career to go back to back in Belgium, becoming the first Australian to win there since Jack Brabham in 1960, also making him the only non-Mercedes driver to have won a Grand Prix in 2014.

Daniel Joseph Ricciardo was born on 1 July 1989 in Perth, Western Australia, to Italian-Australian parents. His father, Giuseppe "Joe" Ricciardo, was born in Ficarra (Messina), but relocated to Australia with his family aged just seven. Ricciardo's mother, Grace was born in Australia, but had parents originally from Casignana (Calabria). Ricciardo also has a sister; Michelle. Growing up in Duncraig, one of Perth's northern suburbs, Ricciardo's earliest memories of motorsports were of his father racing at the nearby Barbagallo Raceway in Wanneroo. He attended high school at Newman College. He started karting at the age of 9.

Daniel Joseph Ricciardo AM (/rɪˈkɑːrdoʊ/ "Ricardo", Italian: [ritˈtʃardo]; born 1 July 1989) is an Italian-Australian racing driver who is currently competing in the 2022 FIA Formula One World Drivers Championship driving for the McLaren Formula One team, under the Australian flag. He made his debut at the 2011 British Grand Prix with the HRT team as part of a deal with Red Bull Racing, for whom he was test driving under its sister team Scuderia Toro Rosso. Ricciardo's driver number is 3. He has achieved 8 Grand Prix victories in Formula One.

Ricciardo started karting at the age of nine, as a member of the Tiger Kart Club (TKC) and entered numerous karting events. In 2005, he entered the Western Australian Formula Ford championship driving a 15-year-old Van Diemen, finishing eighth by season's end. Towards the end of the season, Ricciardo took a leased 13-year-old Van Diemen across to Sandown Raceway in Melbourne to compete at the national Formula Ford series but his aging car was uncompetitive as he finished 16th, 17th and retired during the weekend's three races.

On 30 October 2009, Ricciardo was signed by Tech 1 to compete in the 2010 season. He had competed with the team at the Autódromo Internacional do Algarve in Portugal in 2009, and was the teammate to Brendon Hartley, another driver who drove for Tech 1 over the season.

Ricciardo made his track debut at the wheel of a Formula One car, when he tested for Red Bull Racing at the young drivers test at Circuito de Jerez over three days, from 1–3 December 2009. On the final day of testing he clocked the fastest time of the test by over a second. This placed him as the only driver to go into the 1:17 bracket. Red Bull Racing's team manager Christian Horner suggested that Ricciardo may replace his 2010 World Series teammate Hartley as the team's test and reserve driver. As it turned out, Ricciardo and Hartley were to share test and reserve duties for both Red Bull, and sister team Scuderia Toro Rosso until the latter was removed from the Red Bull Junior team.

On 11 November 2010, Ricciardo was confirmed as the single driver to represent Red Bull Racing at the end-of-season young driver's test at the Yas Marina Circuit, on 16–17 November. At the announcement, he commented, "I can't wait to get another crack at driving Red Bull Racing's amazing Formula One car." Ricciardo continued to show his one-lap prowess and dominated the event, with his fastest lap being 1.3 seconds faster than 2010 World Champion Sebastian Vettel's qualifying lap the Saturday before.

In 2011 Ricciardo raced for ISR Racing prior to his HRT call-up.

On 30 June 2011, Ricciardo was contracted to Hispania Racing by Red Bull Racing, replacing Narain Karthikeyan for all the remaining races of the 2011 season except the Indian Grand Prix, to allow Karthikeyan to race at his home Grand Prix. Ricciardo made his Grand Prix debut at the 2011 British Grand Prix at Silverstone.

However, on 22 October 2011, a few days before the inaugural Indian Grand Prix, the race where Karthikeyan was due to gain back his seat for his home race, HRT F1 announced that Vitantonio Liuzzi made way for Karthikeyan, allowing Ricciardo to race in India and extend his learning curve that Red Bull Racing paid the struggling Spanish team to do, as well as allowing Karthikeyan to race in front of his home fans. In Abu Dhabi, Ricciardo retired with mechanical problems after starting 20th on the grid and in the final race at the Brazilian Grand Prix, Ricciardo finished 20th after starting 22nd on the grid.

On 14 December 2011, it was confirmed that Ricciardo would drive for the Scuderia Toro Rosso for the 2012 season, alongside Frenchman Jean-Éric Vergne.

Ricciardo joined Toro Rosso in 2012 full-time after the team changed its driver lineup and drove a Ferrari-powered car for them in 2012 and 2013. In 2014, Ricciardo was promoted to Red Bull as a replacement for the retired Mark Webber alongside multiple time world champion Sebastian Vettel. In his first season with Red Bull under Renault power, Ricciardo finished third in the championship with his first three Formula One wins, in Canada, Hungary, and Belgium.

At the 2012 Australian Grand Prix on 18 March 2012, Ricciardo managed to overtake his teammate Vergne late on the last lap to come home in ninth place, securing his first two World Championship points.

On 4 October 2014, it was announced that Ricciardo would partner Daniil Kvyat for the 2015 season, following the announcement of Vettel's departure from the team. In his first season for Red Bull Racing, Ricciardo confirmed third place in the drivers' championship at the Brazilian Grand Prix, despite it being his first retirement since the Malaysian Grand Prix. In the final race of the season, the Abu Dhabi Grand Prix, despite starting from the pit lane due to a front wing infringement, Ricciardo finished in fourth place and secured the first fastest lap of his Formula One career. For his 2014 performances, Ricciardo won the Laureus World Sports Award for Breakthrough of the Year in April 2015.

In 2015, Red Bull slipped behind Ferrari and Williams in their efforts to take the title fight to Mercedes. The Red Bull cars were held back by the Renault power unit having been out-developed by Mercedes and Ferrari. The RB11 only showed pace in slow and twisty high downforce tracks or rain , highlighting the car's strong chassis.

Ricciardo supports the Australian Football League's West Coast Eagles and was the club's number-one ticket holder in 2015 and 2016. He is also a big UFC fan.

On 8 February 2015, during the third episode of series 22 of the popular British motoring television programme Top Gear, Ricciardo became the fastest Formula One driver to perform a lap of the Top Gear test track during the Star in a Reasonably Priced Car feature, beating the previous record-holder Lewis Hamilton with a time of 1:42.2.

At the Italian Grand Prix, Ricciardo finished in 4th place, his best result of the year. Teammate Hülkenberg finished in 5th, contributing to Renault's best finish since the team returned to the sport in 2016. Ricciardo was involved in a first-lap collision in Russia, leading to his eventual retirement. He was initially classified 6th in Japan, before both Renault cars were disqualified ten days later for using illegal driver aids. Three consecutive points finishes followed, with strong 6th-place finishes in the United States and Brazil.

After two years without a victory, Ricciardo returned to the top of the podium at the 2016 Malaysian Grand Prix, eventually sealing third in the championship for the second time in three years at the 2016 Mexican Grand Prix. He has since added victories for Red Bull at the Azerbaijan Grand Prix in 2017 and the Chinese and Monaco Grands Prix in 2018. After 2018, Ricciardo signed with Renault and raced for them in the 2019 and 2020 seasons. He joined McLaren for the 2021 and 2022 Formula One seasons, alongside Lando Norris. He obtained his first race win with McLaren at the 2021 Italian Grand Prix. After the 2021 season, Ricciardo was appointed a Member of the Order of Australia in the 2022 Australia Day Honours.

On 3 August 2018, it was announced that Ricciardo had signed a contract to drive for Renault in 2019 and 2020. Ricciardo's teammate for the 2019 season was Nico Hülkenberg. Ricciardo had a poor start to the season with retirements in the first two races, from front wing damage in Australia and power failure in Bahrain. A 7th-place finish in China followed. In Azerbaijan, Ricciardo reversed into Daniil Kvyat when both cars stopped after an overtake attempt by Ricciardo, causing race-ending damage for both drivers and Ricciardo's third retirement in four races. Six consecutive race finishes followed, including a strong 4th place in qualifying and 6th-place finish in Canada. Ricciardo then suffered an exhaust failure at the German Grand Prix.