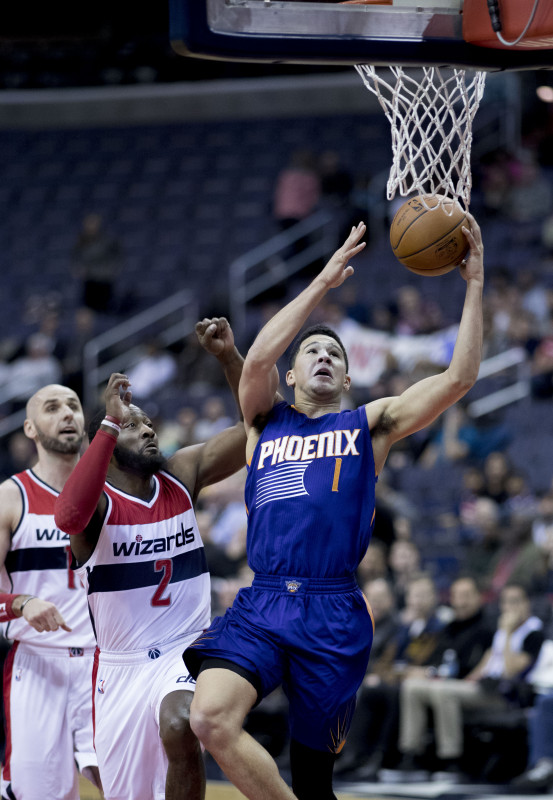 In the Laurel MLK Shootout, Booker scored 54 points against Northeast Jones High School, falling nine shy of Litterial Green's Moss Point record for most points in a game, set in 1988. He followed up that performance with 32 points, including a game-winning three-pointer, against Murrah High School and was named ESPNHS.com's Southeast Player of the Week. At that time, his father told reporters that Booker was drawing interest from Mississippi State, Ole Miss, Florida, Alabama, Georgetown, Michigan and Missouri.

On March 24 against the Boston Celtics, Booker became the sixth player in NBA history to score 70 points in a game, joining Wilt Chamberlain, David Robinson, David Thompson, Elgin Baylor and Kobe Bryant. It was the 11th 70-point game in NBA history. Booker finished 21-of-40 shooting overall, including 4-of-11 on 3-pointers, and 24-of-26 from the free throw line. He added eight rebounds and six assists in 45 minutes. Booker, 20, became the youngest player to score 70 (and 60) points in a game. He had the highest-scoring game in the NBA since Bryant scored 81 in January 2006. The Suns' previous scoring record was held by Tom Chambers with 60 points on March 24, 1990. With 21 points against Dallas on April 9, Booker passed Kobe Bryant to move into fourth place on the NBA scoring list of players before their 21st birthday with 2,774 points, trailing only Carmelo Anthony, Kevin Durant, and leader LeBron James. Booker ended the season averaging 22.1 points per game, a near 9-point increment from his 13.8 points in 2015–16.

Devin Armani Booker (born October 30, 1996) is an American professional basketball player for the Phoenix Suns of the National Basketball Association (NBA). He attended Moss Point High School in Moss Point, Mississippi and played in the 2014 McDonald's All-American Game, before spending one season playing college basketball for the University of Kentucky. He was drafted 13th overall in the 2015 NBA draft by the Phoenix Suns. On March 24, 2017, Booker became the youngest player to score over 60 points in a game, finishing with 70 against the Boston Celtics. In March 2019, at 22 years old, Booker became the youngest player in NBA history with consecutive 50-point games. His father, Melvin Booker, played for three teams in the NBA. Booker received his first NBA All-Star selection in 2020.

On January 12, 2017, he scored 28 fourth-quarter points, in another 39-point night, to set the Suns franchise record for most points in a quarter previously held by Stephon Marbury's 26 points in 2002. He had a second straight 39-point effort in a two days later to become the youngest player in NBA history to record consecutive games of 39 or more points in the regular season. He was named to the U.S. Team for the 2017 Rising Stars Challenge, and was invited to take part in the 2017 Taco Bell Skills Challenge. On February 4, at 20 years, 97 days old, Booker became the youngest player to score at least 20 points in 16 consecutive games. His 16-game streak is the second-longest by any first-year or second-year player since Vince Carter had a 23-game run as a second-year player during the 1999–2000 season.

On March 3, Booker scored a then career-high 34 points in a loss to the Miami Heat, becoming the first Suns rookie since Richard Dumas in the 1992–93 season to record multiple 30+ point games for the team and the fourth-youngest player to do it in a season. His third 30-point game came on March 9 against the New York Knicks, finishing with 32 points to join Walter Davis (17) and Alvan Adams (6) as the only Suns rookies with 3+ 30-point games. A day later, Booker recorded his second-straight 30+ point game (third in a week and fourth overall at the time) by setting a new career-high with 35 points in a loss to the Denver Nuggets, joining LeBron James as the only teenagers in NBA history with back-to-back 30+ point games. On March 12, he recorded his third double-double of the season with 18 points and a career-high 11 assists in a 123–116 loss to the Golden State Warriors, becoming the first Suns rookie with multiple points/assists double-doubles since Negele Knight (3) in the 1990–91 season. He recorded his fifth 30-point game of the season on March 28 against the Minnesota Timberwolves. Throughout the month of March, Booker led all rookies in points (22.4) and assists (4.9) per game. His sixth and final 30-point game of the season came on April 5 in a loss to the Atlanta Hawks, scoring 34 points on 12-of-25 shooting. On April 9, with 16 points scored in a 121–100 win over the New Orleans Pelicans, Booker reached 1,014 for the season, making him the fourth-youngest player to reach 1,000 career points, following only LeBron James, Kevin Durant and Kobe Bryant, as well as the third-youngest during their rookie season. Booker finished his rookie campaign with 1,048 points at an average of 13.8 per game. He appeared in 76 of the team's 82 games in 2015–16, a season that saw the Suns finish with the second-worst record in the West (23–59) and the second-worst record in franchise history. In addition, Booker made 51 starts and averaged 2.5 rebounds and 2.6 assists per game, earning praise from fellow NBA players such as Klay Thompson, Dwyane Wade and Kobe Bryant. He finished fourth in the 2016 NBA Rookie of the Year Award voting and earned NBA All-Rookie First Team honors. He became the first Suns player to be named an All-Rookie Team member since Amar'e Stoudemire in 2003.

After playing for the freshman, junior varsity and varsity basketball teams during his freshman year at Grandville High School in Michigan, Booker moved to Mississippi to live with his father after the latter's retirement from professional basketball. He enrolled at Moss Point High School, where his father was hired as an assistant coach, in August 2011. In his team's fifth game of the season—a 52–32 loss to Gulfport High School—Booker scored more points (17) than the rest of his teammates combined (15). In December, he hit a buzzer beater from just beyond half court to beat Harrison Central High School, improving Moss Point's record to 4–6 on the year. By early January, Press-Register sportswriter Creg Stephenson opined, "Sophomore guard Devin Booker has developed into one of the top players on the coast in his first season with the [Moss Point] Tigers' varsity, averaging 22.7 points per game."

During the summer of 2013, Booker participated in the Kevin Durant Skills Academy, the LeBron James Skills Academy, the CP3 Elite Guard Camp, and the National Basketball Players Association (NBPA) Top 100 camp. His fellow participants in the NBPA camp voted him to the camp's 10-man all-star team. Booker also participated against international competition at the Nike Global Challenge. At the Under Armor Elite 24 showcase, he won the three-point shooting contest. In August 2013, Booker narrowed his list of potential college choices to Florida, Missouri, Michigan, Michigan State, and Kentucky. He took an official visit to Kentucky on the weekend of September 9 to watch an alumni exhibition game; fellow 2014 prospects Jahlil Okafor and Tyler Ulis also attended.

In 38 games for Kentucky in 2014–15, Booker averaged 10.0 points, 2.0 rebounds and 1.1 assists in 21.5 minutes per game. He subsequently earned SEC Sixth Man of the Year honors and was named to the SEC All-Freshman Team and the All-SEC Second Team.

In Kentucky's first exhibition game against the University of Pikeville on November 2, 2014, Booker was the team's second leading scorer with 16 points on 6-of-9 shooting, including two three-pointers; he also had three assists.

On June 25, 2015, Booker, was selected with the thirteenth overall pick by the Phoenix Suns in the 2015 NBA draft. On July 13, he signed his rookie scale contract with the Suns, and in seven subsequent Summer League games, he averaged 15.3 points, 4.9 rebounds and 1.7 assists per game. He went on to make his NBA debut two days before his 19th birthday, in the Suns' season opener against the Dallas Mavericks. He became the first player in NBA history to debut at 18 years old after playing at least one year of college basketball. In 21 minutes of action against the Mavericks, he scored 14 points on 6-of-7 shooting in a 111–95 loss. While he began the season as a backup shooting guard throughout the early portion of the season, including starts on November 23 and December 21, a late December injury to starting guard Eric Bledsoe on December 26 led to Booker's promotion to the starting line-up for the rest of the season. Before his teammate's injury, Booker was producing averages of 5.4 points, 0.9 rebounds, and 0.8 assists in 14.1 minutes of play. His production then increased throughout the second half of the season.

During the offseason, Booker trained with head coach Earl Watson and former NBA player Baron Davis at UCLA, was invited to be on the select team that practices against Team USA in preparation for the Summer Olympics, and played two games for the Suns during the Las Vegas Summer League. With teammate Eric Bledsoe returning from injury in 2016–17, Booker was retained as the starting shooting guard while Brandon Knight was moved to the bench. In the Suns' season opener on October 26, Booker scored 18 points on 8-of-12 shooting in a 113–94 loss to the Sacramento Kings. Booker played alongside rookies Marquese Chriss and Dragan Bender and the Suns became the first NBA team to play three teenagers in the same game. Booker scored a career-highs of 38 points and 39 points on November 4 and 6, becoming the first Suns player to record consecutive games of 38 or more points in the regular season since Tom Chambers 28 years earlier.

On January 2, 2016, Booker scored a then season-high 21 points in a 142–119 loss to the Sacramento Kings. Only Kobe Bryant, Tracy McGrady, LeBron James, Dwight Howard and Kevin Durant scored 20+ points more than once at a younger age than Booker. He became the youngest Phoenix Suns player and the fifth-youngest player in NBA history to record a double-double behind LeBron James, Andrew Bynum, Giannis Antetokounmpo and Michael Kidd-Gilchrist on January 6. On January 19, he scored 32 points in a 97–94 loss to the Indiana Pacers, setting a Suns' rookie record with six three-pointers. Booker became the third-youngest player in NBA history at 19 years, 81 days old to record a 30-point game, behind LeBron James and Kevin Durant, as well as the youngest Suns player to score 30 or more points in a game. On February 12, Booker scored 23 points in a close victory for Team USA in the 2016 Rising Stars Challenge. The following day, he competed in the NBA All-Star Weekend's Three-Point Contest, becoming the youngest contestant to ever participate in the event and only the fourth rookie to compete in the 30-year-old contest, joining Stephen Curry (2010), Kyle Korver (2004) and Dennis Scott (1991). He made it to the final round of the event, beating both James Harden and J. J. Redick in a tiebreaker event after the first round, where he finished third behind the "Splash Brothers" – Stephen Curry and Klay Thompson (winner).

On September 10, he was ruled out for six weeks after undergoing surgery to repair the fifth metacarpophalangeal joint in his right hand after he jammed it in practice on March 14, 2018. He recovered in time for the Suns' season opener on October 17, scoring 35 points in a 121–100 victory over the Dallas Mavericks.

On July 7, 2018, Booker signed a five-year, $158 million maximum contract extension with the Suns.

On November 23, 2019, Booker almost put up a triple-double with 35 points, a career-high 12 rebounds, and 9 assists in a 100–98 win over the Minnesota Timberwolves. From December 27, 2019 until January 7, 2020, Booker scored over 30 points in seven straight games, including a 40 point performance in a loss against the Memphis Grizzlies on January 5. This streak broke a franchise record for most consecutive 30+ point games in a row, beating a record previously set by Charlie Scott twice and Charles Barkley once. In addition, his streak from December 28 until January 7 made him the only player since the 1983–84 NBA season to record six straight performances of 30+ points and 6+ assists with 47% shooting efficiency. On January 28, Booker became the fourth-youngest player to reach 7,000 career points, behind only LeBron James, Kevin Durant, and Carmelo Anthony. Booker was named an All-Star on February 13, 2020 as an injury replacement after Damian Lillard suffered an groin strain injury a day earlier. He also replaced Lillard in the Three Point Contest, an event he had previously won, and finished as the runner-up behind Buddy Hield.