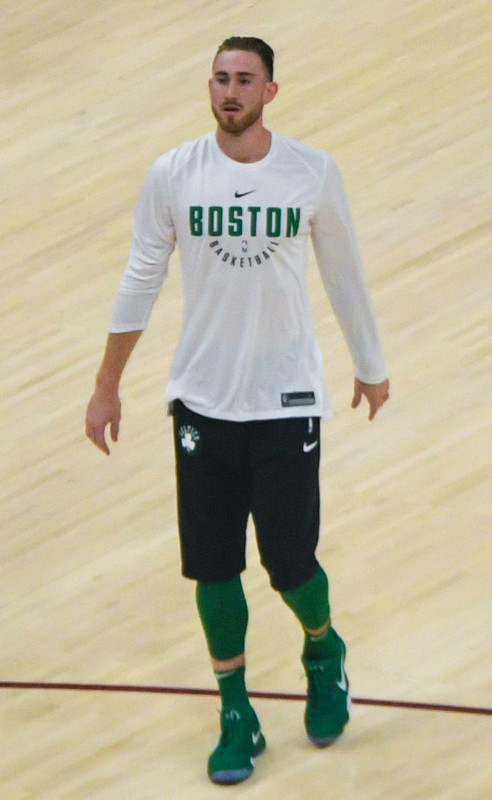 Gordon Daniel Hayward (born March 23, 1990) is an American professional basketball player for the Charlotte Hornets of the National Basketball Association (NBA). He played two seasons of college basketball for the Butler Bulldogs and was selected by the Utah Jazz with the ninth overall pick of the 2010 NBA draft. He played seven seasons in Utah before signing with the Boston Celtics in 2017. In college, Hayward led Butler to the championship game of the 2010 NCAA Tournament. In 2017, Hayward was selected as an NBA All-Star for the first time.

As a senior in 2007–08, Hayward averaged 18.0 points, 8.4 rebounds and 3.6 assists per game. Hayward and teammate Julian Mavunga led Brownsburg to the Indiana Class 4A state championship. In the title game, Hayward made the game-winning basket at the buzzer to defeat Marion High School 40–39. Hayward was selected Second-team all-state by AP and First-team all-state by the Indiana Basketball Coaches Association. He was selected Indianapolis Star Player of the Year. and he received the IHSAA Arthur L. Trester Award in Class 4A. Hayward was selected to represent Indiana in the 2008 Indiana – Kentucky Boys All-Star Game, which Indiana won.

As a rookie in 2010–11, Hayward came off the bench. On April 5, 2011, Hayward had a noticeable performance in an 86–85 victory over the Los Angeles Lakers, finishing with 22 points, 6 rebounds, and 5 assists. Hayward ended the season with a 34-point game, a career high at the time, in a 107–103 win over the Denver Nuggets on April 13. As a sophomore in 2011–12, Hayward established himself in the starting lineup, and was selected to play in the 2012 NBA Rising Stars Challenge game. Hayward played for Team Chuck and recorded 14 points as his team won the game. Hayward made his NBA playoffs debut against the San Antonio Spurs as the Jazz lost 4–0, in the first round. During the 2012–13 season, Hayward mainly came off the bench as a sixth man, but averaged a career high in points per game. Hayward received a third-place vote for the NBA Sixth Man of the Year award.

After the 2010 NCAA basketball tournament, Hayward confirmed that he would submit his name for consideration in the 2010 NBA draft, but did not immediately hire an agent. In May 2010, Hayward announced that he would forgo his final two seasons of college eligibility and enter the NBA draft. He hired Mark Bartelstein as his agent. On June 24, 2010, Hayward was selected as the ninth overall pick in the NBA draft by the Utah Jazz.

Hayward is interested in video games and named League of Legends as his favourite esport. Hayward also is active in mobile games such as Clash Royale, where he created a clan inviting friends and fans to compete and socialize. In October 2018, League of Legends developer Riot Games released an animated commercial in support of Hayward's recovery from an ankle injury while playing for the Boston Celtics. Hayward has appeared in commercials for the IGN Pro League and played StarCraft II during IGN Pro League 3 in 2011. Hayward has esports and gaming endorsements with HyperX, Xfinity, and AutoFull. On August 9, 2019, he signed an honorary lifetime contract for Hupu, a Chinese League of Legend Teams as its midlaner.

In 2012, Hayward was selected as a member of the USA Basketball Select Team that trained against the United States Olympic team.

In 2014, he was selected as a finalist for the United States FIBA Basketball World Cup team, but he did not make the final 12-man roster.

After the departure of Paul Millsap and Al Jefferson during the 2013 offseason, Hayward emerged as the Jazz's new offensive threat, averaging career highs per game in points, rebounds, assists and steals. On January 7, 2014, Hayward scored career-high 37 points in a win over the Oklahoma City Thunder. After the 2013–14 season, Hayward became a restricted free agent. On July 10, 2014, Hayward received a four-year, $63 million maximum contract offer from the Charlotte Hornets. On July 12, 2014, the Jazz matched the offer sheet, re-signing Hayward.

In 2016, Hayward was named a finalist for United States Olympic team. He ultimately withdrew his name from selection, citing "family obligations".

On April 21, 2017, in Game 3 of the Jazz's first-round playoff series against the Los Angeles Clippers, Hayward scored a career-high 40 points in a 111–106 loss. Hayward's 21 first-quarter points in Game 3 was a franchise playoff record for any one quarter. In Game 7 of the series on April 30, he scored 26 points as the Jazz eliminated the Clippers with a 104–91 victory, closing out the first-round series 4–3 to earn the franchise's first postseason victory since 2010. The Jazz went on to lose in the second round to the Golden State Warriors in 4 games.

On July 4, 2017, Hayward announced via The Players' Tribune that he would sign with the Boston Celtics. On July 14, he signed with the Celtics to a reported four-year, $128 million contract. On October 17, 2017, Hayward suffered a fractured tibia and dislocated ankle in his left leg less than six minutes into the Celtics' regular-season opener against the Cleveland Cavaliers. He landed awkwardly on the hardwood after an attempted alley-oop off a pass from Kyrie Irving, causing his leg to collapse underneath his weight. He was later ruled out for the rest of the season after undergoing surgery. Hayward had made considerable progress until he needed a second surgery in March 2018.

In 2018, Hayward signed an endorsement deal with Chinese sports footwear and apparel company Anta. As part of the deal, Hayward will debut a signature shoe line. Hayward previously had endorsement deals with Peak and Nike.

On October 16, 2018, Hayward played in his first game since the ankle injury. He recorded 10 points and five rebounds in 25 minutes in a 105–87 season-opening win over the Philadelphia 76ers. Hayward mainly came off the bench during the season, recovering from the injury. On December 1, 2018, he scored a season-high 30 points in a 118–109 win over the Minnesota Timberwolves. On January 2, 2019, Hayward set a new season-high with 35 points in a 115–102 win over the Timberwolves.

On August 17, 2020, Hayward was injured with a Grade 3 right ankle sprain after improperly landing on teammate Daniel Theis' foot while jumping for a rebound during the 1st round of the playoffs against the Philadelphia 76ers. On September 20, 2020, he returned to play Game 3 of the Eastern Conference Finals against the Miami Heat, however only in minimal capacity as the Heat went on to eliminate the Celtics in 6 games.

On November 29, 2020, Hayward was signed by the Boston Celtics to a four-year $120 million deal and then traded to the Charlotte Hornets, along with 2023 and 2024 second-round draft picks, in exchange for a conditional 2022 second-round draft pick. The trade also allowed the Boston Celtics to create a traded-player exception worth the value of the first year of Hayward’s four-year, $120 million dollar deal, that is $28.5 million, making it the biggest traded-player exception created in the history of the NBA. On December 23, 2020, Hayward made his Hornets debut, putting up 28 points, seven assists, and four rebounds in a 121–114 loss to the Cleveland Cavaliers. On January 6, 2021, Hayward set a new career high of 44 points in a 102–94 win over the Atlanta Hawks.