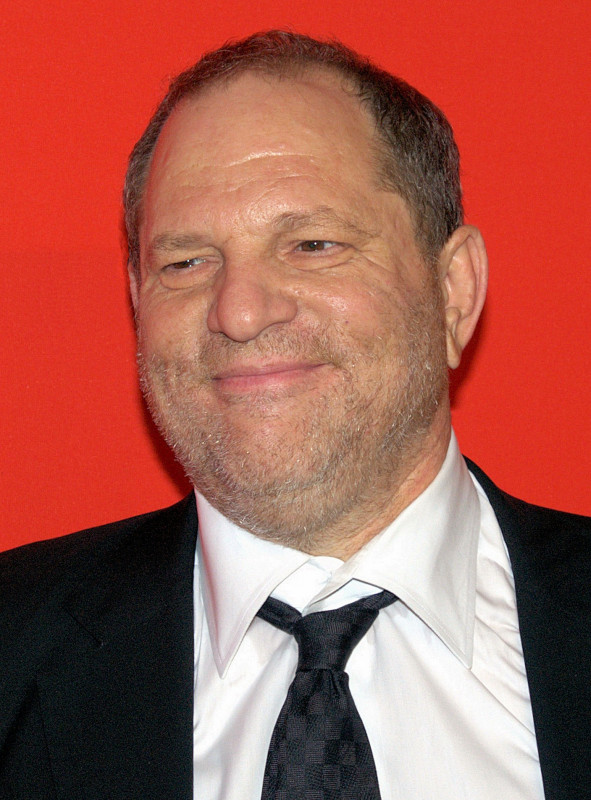 Harvey Weinstein CBE (/ˈwaɪnstiːn/; born March 19, 1952) is an American former film producer and a convicted sex offender. He and his brother Bob Weinstein co-founded the entertainment company Miramax, which produced successful independent films including Sex, Lies, and Videotape (1989), The Crying Game (1992), Pulp Fiction (1994), Heavenly Creatures (1994), Flirting with Disaster (1996), and Shakespeare in Love (1998). Weinstein won an Academy Award for producing Shakespeare in Love and seven Tony Awards for plays and musicals, including The Producers, Billy Elliot the Musical, and August: Osage County. After leaving Miramax, Weinstein and his brother Bob founded The Weinstein Company, a mini-major film studio. He was co-chairman, alongside Bob, from 2005 to 2017.

Weinstein was born March 19, 1952, in the Flushing section of Queens, New York, to diamond cutter Max Weinstein and his wife, Miriam (née Postel). His family is Jewish, and his maternal grandparents were Polish immigrants. He grew up with his younger brother, Bob, in a housing co-op named Electchester in New York City. He graduated from John Bowne High School and attended the State University of New York at Buffalo. Weinstein, his brother Bob, and Corky Burger independently produced rock concerts as Harvey & Corky Productions in Buffalo through most of the 1970s. Harvey & Corky Productions brought top acts to Buffalo, including Frank Sinatra, Jackson Browne and The Rolling Stones. The group eventually purchased a Clarence, New York nightclub and named it Stage One. Weinstein's longtime friend, Jonathan A. Dandes, followed him to Buffalo; he has described Weinstein as "aggressive" and "consumed" in matters of business.

In the early 1980s, Miramax acquired the rights to two British films of benefit shows filmed for the human rights organization Amnesty International. Working closely with Martin Lewis, the producer of the original films, the Weinstein brothers edited the two films into one movie tailored for the American market. The resulting film was released as The Secret Policeman's Other Ball in May 1982, and it became Miramax's first hit. The movie raised considerable sums for Amnesty International and was credited by Amnesty with having helped to raise its profile in the United States.

Weinstein has been married twice. In 1987, he married his assistant Eve Chilton; they divorced in 2004. They had three daughters: Remy (previously Lily; born 1995), Emma (born 1998), and Ruth (born 2002). In 2007, he married English fashion designer and actress Georgina Chapman. They have a daughter, India Pearl (born 2010), and a son, Dashiell (born 2013). On October 10, 2017, Chapman announced she was leaving Weinstein after the sexual harassment accusations. They divorced the next year.

The Weinsteins slowly built upon this success throughout the 1980s with arthouse films that achieved critical attention and modest commercial success. Harvey Weinstein and Miramax gained wider attention in 1988 with the release of Errol Morris' documentary The Thin Blue Line, which detailed the struggle of Randall Dale Adams, a wrongfully convicted inmate sentenced to death row. The publicity that soon surrounded the case resulted in Adams' release and nationwide publicity for Miramax. In 1989, their successful launch release of Steven Soderbergh's Sex, Lies, and Videotape propelled Miramax to become the most successful independent studio in America.

Also in 1989, Miramax released two arthouse films, Peter Greenaway's The Cook, the Thief, His Wife & Her Lover, and director Pedro Almodóvar's film Tie Me Up! Tie Me Down!, both of which the MPAA rating board gave an X-rating, effectively stopping nationwide release for these films. Weinstein sued the MPAA over the rating system. His lawsuit was later thrown out, but the MPAA introduced the NC-17 rating two months later.

Miramax continued to grow its library of films and directors until, in 1993, after the success of The Crying Game, Disney offered the Weinsteins $80 million for ownership of Miramax. The brothers agreed to the deal that would cement their Hollywood clout and ensure that they would remain at the head of their company, and the next year, Miramax released their first blockbuster, Quentin Tarantino's Pulp Fiction, and distributed the popular independent film Clerks.

Miramax won its first Academy Award for Best Picture in 1997 with the victory of The English Patient. (Pulp Fiction was nominated in 1995 but lost to Forrest Gump.) This started a string of critical successes that included Good Will Hunting (1997) and Shakespeare in Love (1998), both of which won several awards, including numerous Academy Awards.

Harvey Weinstein had previously won numerous awards before his sexual assault allegations surfaced. On September 26, 2000, Harvey Weinstein was awarded the honorary degree of Doctor of Humane Letters (DHL) by the University at Buffalo. He was awarded again on April 19, 2004, when Weinstein was appointed an honorary Commander of the Order of the British Empire in recognition of his contributions to the British film industry. This award was "honorary" because Weinstein is not a citizen of a Commonwealth country. On March 2, 2012, Weinstein was made a knight of the French Legion of Honour, in recognition of Miramax's efforts to increase the presence and popularity of foreign films in the United States.

The Weinstein brothers left Miramax on September 30, 2005, to form their own production company, The Weinstein Company, with several other media executives, directors Quentin Tarantino and Robert Rodriguez, and Colin Vaines, who had successfully run the production department at Miramax for 10 years. In February 2011, filmmaker Michael Moore took legal action against the Weinstein brothers, claiming he was owed $2.7 million in profits for his documentary Fahrenheit 9/11 (2004), which he said had been denied to him by "Hollywood accounting tricks". In February 2012, Moore dropped the lawsuit for an undisclosed settlement.

In a 2004 newspaper article, in New York magazine, Weinstein appeared somewhat repentant for his often aggressive discussions with directors and producers. However, a Newsweek story on October 13, 2008, criticized Weinstein, who was accused of "hassling Sydney Pollack on his deathbed" about the release of the film The Reader. After Weinstein offered $1 million to charity if the accusation could be proven, journalist Nikki Finke published an email sent by Scott Rudin on August 22 asserting that Weinstein "harassed" Anthony Minghella's widow and a bedridden Pollack until Pollack's family asked him to stop.

In September 2009, Weinstein publicly voiced opposition to efforts to extradite Roman Polanski from Switzerland to the U.S. regarding a 1977 charge that he had drugged and raped a 13-year-old, to which Polanski had pleaded guilty before fleeing the country. Weinstein, whose company had distributed Roman Polanski: Wanted and Desired, a film about the Polanski case, questioned whether Polanski committed any crime, prompting Los Angeles County District Attorney Steve Cooley to insist that Polanski's guilty plea indicated that his action was a crime, and that several other serious charges were pending.

Weinstein is a longtime supporter of and contributor to the Democratic Party, including the campaigns of President Barack Obama and presidential candidates Hillary Clinton and John Kerry. He supported Hillary Clinton's 2008 presidential campaign, and in 2012, he hosted an election fundraiser for Obama at his home in Westport, Connecticut.

Weinstein was later released after $1 million bail was posted on his behalf. He surrendered his passport and was required to wear an ankle monitor, with travel being restricted to New York and Connecticut. His lawyer Benjamin Brafman said Weinstein would plead not guilty. A trial date was set for January 6, 2020. On that date, Weinstein was also charged in Los Angeles with raping one woman and sexually assaulting another in 2013.

In October 2017, The New York Times and The New Yorker reported that more than a dozen women accused Weinstein of sexually harassing, assaulting, or raping them. Many other women in the film industry subsequently reported similar experiences with Weinstein, who denied "any nonconsensual sex". As a result of these accusations, Weinstein was fired from his production company, suspended from the British Academy of Film and Television Arts, and expelled from the Academy of Motion Picture Arts and Sciences. He also resigned from the Directors Guild of America and was denounced by leading figures in politics whom he had supported. The Los Angeles Police Department opened a criminal investigation for alleged rape, and New York and London police began investigating other sexual assault allegations. On October 10, 2017, Weinstein's wife, Georgina Chapman, announced that she was leaving him.

In October 2017, following sexual abuse allegations, Weinstein was dismissed from his company and expelled from the Academy of Motion Picture Arts and Sciences. More than 80 women had made allegations against Weinstein by October 31. The allegations sparked the #MeToo social media campaign and many similar sexual abuse allegations against (and dismissals of) powerful men around the world; this phenomenon is referred to as the "Weinstein effect". Weinstein was arrested and charged with rape in New York on May 25, 2018. He was found guilty of two of five felonies on February 24, 2020. He was sentenced to 23 years in prison, and was initially held at Rikers Island prison before being transferred to Wende Correctional Facility.

Weinstein has been active on issues such as poverty, AIDS, juvenile diabetes, and multiple sclerosis research. Until October 2017, he served on the Board of the Robin Hood Foundation, a New York City-based non-profit that targets poverty, and co-chaired one of its annual benefits. He is critical of the lack of gun control laws and universal healthcare in the United States.

All of the awards mentioned above except for the Order of the British Empire were revoked or stripped by November 2017. Alma mater said his conduct "contradicts the spirit of the honorary degree", while French President Emmanuel Macron revoked his Legion of Honour. The table below lists additional awards given to Weinstein. Those not shared with others have also since been rescinded.

Both Vanity Fair and the New York Post have announced the completion by the playwright and dramatist David Mamet of the play titled Bitter Wheat which is to deal principally with the Weinstein controversy concerning his arrest in 2018. As stated in the New York Post in May 2018: "The plan is to open Mamet's new play in London...sources say Mamet is wary of another run at Broadway unless his Weinstein play gets a good reception in England. He's got a shot with Daniel Evans, the young director who's in talks to do it".

In the aftermath of the sexual misconduct allegations against Weinstein, the company was forced into bankruptcy, with Lantern Entertainment purchasing all assets in 2018. The company was shut down on July 16, 2018 and the website sometime thereafter.

Weinstein was charged by New York police with "rape, criminal sex act, sex abuse and sexual misconduct for incidents involving two separate women" on May 25, 2018. He was arrested the same day after surrendering to police.

In 2019, a documentary Untouchable was released with interviews from several of his accusers.

After deliberating for five days, a jury convicted Weinstein on February 24, 2020 of two of five criminal charges: one count of criminal sexual assault in the first degree and one count of rape in the third degree. The jury found him not guilty regarding predatory sexual assault, which could have led to a life sentence. He was remanded to jail at Rikers Island in New York City pending his sentencing hearing on March 11, when he was sentenced to 23 years in prison. He has said through his attorneys that he would appeal the verdict.

In March 2020, while incarcerated in Wende Correctional Facility in western New York during the 2019–20 coronavirus pandemic, Weinstein tested positive for COVID-19. He reportedly did not show symptoms of the disease, was placed in isolation at the prison and on April 1, 2020 was stated to be recovering.

Weinstein still faces a criminal trial in Los Angeles, after which he will begin serving his sentence in New York before any possible sentence in California. As of March 13, 2020, it is unclear if this appeal will be filed before or after his upcoming charges on similar counts in Los Angeles.