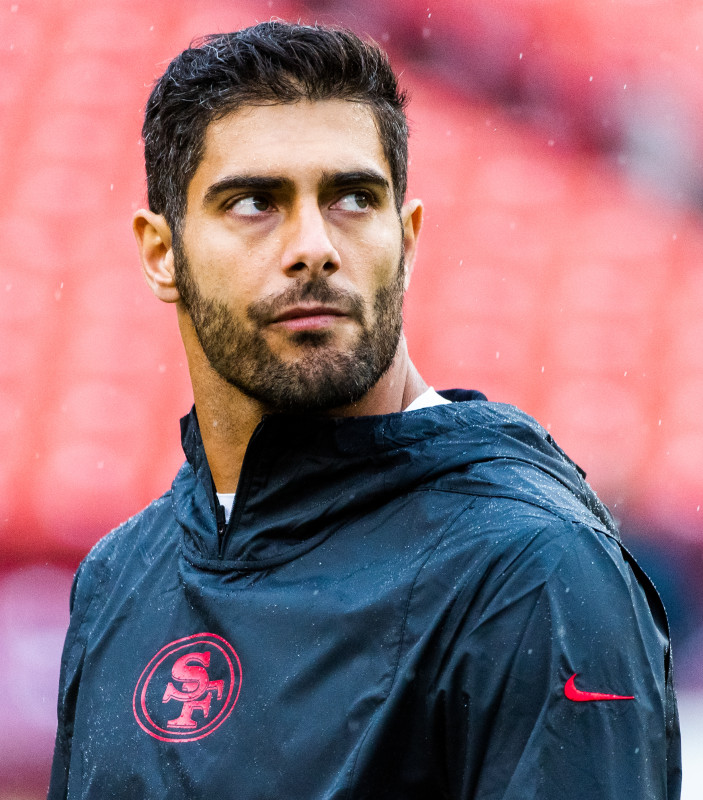 James Richard Garoppolo (born November 2, 1991), nicknamed Jimmy G, is an American football quarterback for the San Francisco 49ers of the National Football League (NFL). He played college football at Eastern Illinois, where he won the Walter Payton Award as a senior and set the school records for career passing yards and passing touchdowns. Garoppolo was selected in the second round of the 2014 NFL Draft by the New England Patriots and spent his first four seasons as Tom Brady's backup.

Represented by Don Yee, Garoppolo was considered one of the better quarterback prospects for the 2014 NFL Draft. The New England Patriots drafted him in the second round of the 2014 NFL Draft, with the 62nd pick overall. He was the first player from the Football Championship Subdivision drafted in 2014, and the highest-drafted quarterback the Patriots had selected since Drew Bledsoe was picked first overall in 1993. Garoppolo and the Patriots signed a four-year contract worth $3,483,898 ($1,103,744 guaranteed) with an $853,744 signing bonus.

On November 28, 2017, Garoppolo was named the starter for the 49ers' Week 13 game against the Chicago Bears. Making his first start for the 49ers on December 3, 2017, Garoppolo finished with 293 passing yards and an interception as the 49ers won 15–14. He recorded 334 passing yards, one touchdown, and one interception in a 26–16 victory over the Houston Texans in Week 14. In the next game against the Tennessee Titans, he had a season-high 381 passing yards and a touchdown in a close 25–23 win. In Week 16 against the Jacksonville Jaguars, he had 242 passing yards, two touchdowns, one interception, and his first career rushing touchdown in the 44–33 victory. In the regular season finale against the Los Angeles Rams, who were resting most defensive starters to prepare for the playoffs, he accumulated 292 passing yards, two touchdowns, and two interceptions in a 34–13 blowout 49ers' win. His victories in Weeks 13–17 gave him a 7–0 record in his first seven starts (including his two starts for New England), making him the first quarterback to do so since Ben Roethlisberger accomplished the same feat in 2004. With Garoppolo under center, the 49ers scored on 62 percent of their offensive drives, 11 percent more than the second-place New England Patriots. For perspective, NFL teams scored on 35 percent of their drives in 2017, and the 49ers scored on just 29 percent of their 2017 drives without Garoppolo. Garoppolo finished the 2017 season with 1,560 passing yards, seven passing touchdowns, five interceptions, 11 rushing yards, and one rushing touchdown.

In 2013, Garoppolo, playing his senior season in head coach Dino Babers's uptempo no-huddle offense, won the Walter Payton Award, given to the most outstanding offensive player in the Division I Football Championship Subdivision. He was also named the 2013–14 OVC Male Athlete of the Year and the 2013 College Football Performance FCS National Quarterback of the Year.

In 2014, Garoppolo made his regular season debut in the fourth quarter of the Patriots' Week 4 41–14 road loss to the Kansas City Chiefs. He led the Patriots on a scoring drive, which led to his first career passing touchdown on a 13-yard pass to tight end Rob Gronkowski on his first drive. He finished the game completing six of seven passes for 70 yards and one touchdown, with a passer rating of 147.9.

In 2015, Garoppolo appeared in five games in relief roles. He completed one of four passes for six yards on the season for a 39.6 passer rating.

On October 31, 2017, the Patriots traded Garoppolo to the San Francisco 49ers in exchange for the 49ers' second-round pick in the 2018 NFL Draft. He made his 49ers debut in Week 12 in the final minute of the 49ers' game against the Seattle Seahawks after starter C. J. Beathard suffered an injury; those were his first snaps of 2017, as he did not take the field with the Patriots in 2017. On his first play as a 49er, he rushed for six yards; on the final play of the game, he threw a 10-yard touchdown to Louis Murphy. He finished the 24–13 loss completing both pass attempts for 18 yards and a touchdown.

On February 8, 2018, the 49ers and Garoppolo agreed to terms on a 5-year contract worth a maximum of $137.5 million. At the time of its signing, it was the largest contract in NFL history on an annual basis, surpassing that of Detroit Lions quarterback Matthew Stafford. It also had nearly $90 million in guarantees in the first three years, also the largest total in NFL history at the time.

Traded to the 49ers near the end of the 2017 season, Garoppolo helped revitalize a 1–10 team by winning the five remaining games of the year. In 2019, he guided the 49ers to the best record in the National Football Conference (NFC) and an appearance in Super Bowl LIV. In 2021, he led the 49ers to the NFC Championship Game. His San Francisco tenure has also been afflicted by injuries, which caused him to miss most of the 2018 and 2020 seasons. He began the 2022 season as the team's backup to starter Trey Lance, but was named the starter following an injury to Lance in week 2.

In Week 7 against his former team, the New England Patriots, Garoppolo threw for 277 yards and two interceptions during the 33–6 win. In Week 8 against the Seattle Seahawks, Garoppolo completed 11 of 16 passes for only 84 yards and an interception before injuring his ankle and leaving in the 4th quarter being replaced by Nick Mullens. The 49ers lost 37–27. The next day, it was announced that Garoppolo would be out indefinitely due to him re-aggravating his high ankle sprain. On November 5, 2020, Garoppolo was placed on injured reserve. He was designated to return from injured reserve on December 22, and began practicing with the team again, but the 49ers did not activate him before the end of the season.