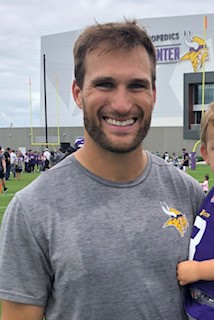 Cousins finished the 2015 season posting the highest completion percentage (74.7) in home games in NFL history, with a minimum of 100 attempts, leading the Redskins to a 6–2 record at home. He also became the first Redskins quarterback since Sonny Jurgensen in 1970 to have at least four passing touchdowns in three or more games in one season. Against the Dallas Cowboys on January 3, 2016, he set the Redskins single-season passing yardage record with 4,166, passing Jay Schroeder who had 4,109 in 1986. He also finished the season with 29 passing touchdowns, second in Redskins history behind Jurgensen who had 31 in 1967, while posting a league-leading completion percentage of 69.8%, second in team history behind Sammy Baugh who completed 70.3% of his passes in 1945.

Kirk Cousins was born to Don Cousins and Maryann Cousins, the second oldest of their three children. Born in Barrington, Illinois on August 19, 1988, Cousins attended Holland Christian High School in Holland, Michigan, where he starred in football, baseball (as a third baseman and a pitcher), and basketball for the Maroons athletic teams. He broke his ankle in his junior year and was forced to attend camps in order to make an impression with recruiting colleges. Cousins finished his high school football career with 3,204 passing yards, 40 touchdowns, and 18 interceptions.

Kirk Daniel Cousins (born August 19, 1988) is an American football quarterback for the Minnesota Vikings of the National Football League (NFL). He played college football at Michigan State and was drafted by the Washington Redskins in the fourth round of the 2012 NFL Draft as a backup to fellow rookie Robert Griffin III. Cousins occasionally appeared in games during his first three seasons before replacing Griffin following an injury in 2015, where he remained the team's starter until 2017. With the Redskins, Cousins set numerous franchise records and was named to the 2017 Pro Bowl.

After high school, Cousins was set to sign with Toledo or Western Michigan, until Mark Dantonio became the head coach at Michigan State in 2007. After Dantonio failed to sign his top targets at quarterback, he offered a scholarship to Cousins, which he accepted. He also participated in the Athletes in Action sports ministry.

On October 25, Cousins helped lead the Redskins to their largest comeback win in franchise history. After being down 24–0 in the second quarter against the Tampa Bay Buccaneers at home, Cousins finished with 317 yards and four total touchdowns, three passing and one rushing, throwing the final touchdown pass to Jordan Reed in the final seconds of the game. Cousins also tied a franchise record for completions in a game with 33, tying Jason Campbell who did the same in 2007. When heading into the locker room after the game, Cousins was caught on camera shouting "you like that?!" to reporters, which later become a catchphrase used by Cousins, his teammates, and Redskins fans throughout the rest of the season. Cousins and his brother Kyle applied to trademark the catchphrase later in the season and began to sell T-shirts with the phrase to raise money for the International Justice Mission charitable organization.

Cousins was redshirted for the 2007 season. In 2008, he spent the season as the backup quarterback to Brian Hoyer. He played in five games passing for a total of 310 yards and two touchdowns and one interception. In 2009, he competed for and won the starting quarterback job against teammate Keith Nichol. He led Michigan State to a 6–7 (4–4) season with 19 touchdowns, nine interceptions and 2,680 passing yards in 12 games. In 2010, he led Michigan State to an 11–2 (7–1) record and a share of the Big Ten Championship.

In 2011, the Spartans went 11–3 (7–2) and played in the first-ever Big Ten championship game. Cousins was named Second-team All-Big Ten by the coaches, and played his final game as a Michigan State Spartan on January 2, 2012, defeating the Georgia Bulldogs in the Outback Bowl. His teams posted an undefeated 4–0 record against the in-state rival Michigan Wolverines. Cousins won the 2011 Lowes's Senior CLASS Award. Cousins majored in kinesiology.

The following week against the Philadelphia Eagles, Cousins took an ill-advised quarterback kneel inside the Eagles' redzone with six seconds left before halftime, running out the clock and forgoing any chance of adding upon Washington's lead. Despite that, Cousins eventually passed for four touchdowns in the game, his second consecutive four-touchdown performance and third overall on the season. The performance led to the Redskins’ victory over the Eagles with a score of 38–24, which allowed the team to win the NFC East division title for the first time since Griffin III did it in 2012.

On May 31, 2012, Cousins signed a four-year contract with the Redskins.

The following week, on December 15, 2012, Cousins was announced as the Redskins starter for the Week 15 game against the Cleveland Browns, marking his first NFL start. After a slow first half, Cousins rallied the offense to a 28-point second half. Cousins finished the day 26-of-37 for 329 yards with 2 touchdown passes, bringing the Redskins a 38–21 win. Later that week, Cousins was voted the Pepsi NFL Rookie of the Week, becoming the third Redskins rookie to receive the honor that season (after Griffin and Alfred Morris).

On December 11, 2013, Cousins was named starting quarterback for the rest of the year after Shanahan deactivated Robert Griffin III for the remainder of the season in order to protect him for the following year, with Rex Grossman as Cousins's backup. In Week 15, in a narrow 27–26 loss to the Atlanta Falcons, he finished 29-of-45 for 381 yards, three touchdowns, and two interceptions.

On February 2, 2014, it was reported that Cousins had stated that he was open to a trade from the Redskins.

Cousins is a practicing Evangelical Christian. He married Julie Hampton on June 28, 2014, in Atlanta, Georgia. As of 2019, Cousins and his wife have two sons, Cooper and Turner. During his time with the Redskins, Cousins earned the nicknames "Captain Kirk" from the media for his presence as a leader, referencing the Star Trek character. He also appeared in several commercials with Easterns Automotive, a D.C. used car dealership, with former Washington teammates Josh Norman and Ryan Kerrigan.

On August 31, 2015, Cousins was named the starter for the season over Robert Griffin III. On October 4, Cousins led a 90-yard game-winning drive against the Philadelphia Eagles, his first since 2012, when he threw a touchdown pass to Pierre Garçon with under a minute left in the fourth quarter, winning the game 23–20.

Despite missing the playoffs, Cousins led the team to a winning record of 8–7–1 and finished the season with a career-high 4,917 passing yards, which was third in the NFL behind Drew Brees and Matt Ryan, breaking various personal and team records he had set the previous year. Cousins' 67% completion percentage ranked No. 7 and his 45.7% deep-ball completion percentage ranked No. 5 among NFL quarterbacks in 2016.

Against the Green Bay Packers in the Wild Card Round on January 10, 2016, Cousins completed 29-of-46 passes for 329 yards and scored two touchdowns (one passing, one rushing), but was sacked six times and lost one fumble. The Redskins lost 35–18, ending their season. He was ranked 85th by his fellow players on the NFL Top 100 Players of 2016.

Cousins was set to become an unrestricted free agent in the 2016 offseason, but the Redskins used the non-exclusive franchise tag on him on March 1, 2016. The tag acted as a one-year, $20 million contract, which prevented other teams in the league from signing him without giving up two first round draft picks to the Redskins.

Again set to become an unrestricted free agent in the offseason, Cousins and the Redskins attempted to work out a long-term deal before the start of free agency, but could only come to an agreement on the exclusive franchise tag on February 28, 2017, becoming the first quarterback in NFL history to be franchise-tagged in consecutive years.

On March 15, 2018, Cousins signed with the Minnesota Vikings on a fully guaranteed three-year contract worth $84 million. This was the first fully guaranteed and, as of signing, highest paying contract in NFL history.

On March 18, 2020, Cousins signed a two-year, $66 million contract extension with the Vikings.

On March 13, 2022, Cousins signed a one-year, $35 million fully guaranteed contract extension through the 2023 season. In the season opener against the Green Bay Packers, Cousins threw 23-of-32 passes for 277 yards with two touchdowns, and a 118.9 passer rating in 23-7 victory. In the following week against the Philadelphia Eagles on Monday Night Football, Cousins passed 27 completions of 46 attempts for 221 yards with one touchdown and three interceptions in a 7-24 blowout loss. In Week 6 against the Miami Dolphins, Cousins threw for 175 yards and two touchdowns in a 24-16 win.