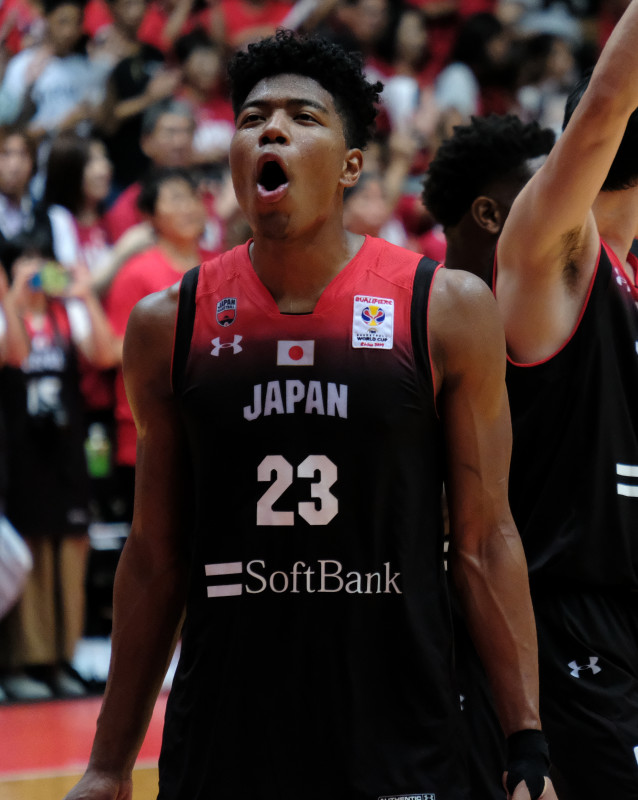 Rui Hachimura (八村 塁, Hachimura Rui, born February 8, 1998) is a Japanese professional basketball player for the Washington Wizards of the National Basketball Association (NBA). He played college basketball for the Gonzaga Bulldogs and is a member of the Japanese national team. Listed at 6 ft 8 in (2.03 m) and 230 lbs (104 kg), he plays both the small forward and power forward positions. He was considered one of the top prospects for the 2019 NBA draft, and he was selected 9th overall in the first round by the Wizards.

Hachimura was born in Toyama Prefecture in Japan to a Japanese mother Makiko (麻紀子) and Beninese father, Zakari Jabil. His given name, Rui (塁), means "base" or "fortress" in Japanese; the name was given to him by his grandfather because he was a big fan of baseball (the character 塁 is also used for "base" in context of baseball). He has three younger siblings, one brother, and two sisters. Hachimura's younger brother, Allen (阿蓮, Aren), is a basketball player at Tokai University in Japan. In his childhood, he played baseball as a catcher and pitcher. On December 29, 2013, Hachimura led the Meisei High School basketball team to its second title in the All-Japan High School Tournament, scoring 32 points in a 92–78 win over Fukuoka University Ohori. In 2014, he helped his team win the tournament for a second straight year. In April 2015, Hachimura was invited to the Jordan Brand Classic, where he recorded nine points and five rebounds in the International Game. On November 21, 2015, he signed a National Letter of Intent to play college basketball for Gonzaga Bulldogs in the U.S., being considered by ESPN as one of the best international players entering college. On December 29, 2015, Hachimura posted 34 points, 19 rebounds and three blocks to guide Meisei past Tsuchiura Nihon University High School for his third All-Japan Tournament victory.

Hachimura represents Japan internationally. At the 2013 FIBA Asia U16 Championship in Iran, he averaged 22.8 points, 12.6 rebounds and 2.8 blocks through eight contests, guiding his team to a third-place finish. In April 2014, he played the Albert-Schweitzer-Tournament in Germany with Japan's under 18 national team, finishing in last place.

Born in Toyama Prefecture, Hachimura achieved success at the youth level in Japan, leading Meisei High School to three straight All-Japan High School Tournament titles and being a top player for the Japanese under-17 and under-19 national teams in FIBA competition. He joined Gonzaga in 2016 as the fifth Japanese-born men's NCAA Division I player and became the first Japanese national in 2017 to play in the NCAA Division I men's tournament. As a sophomore, he earned first-team All-WCC honors. He was named a finalist for the Naismith Player of the Year.

Despite signing with Gonzaga in the early signing period for 2016, Hachimura had his eligibility to play college basketball called into question. The concerns were that he needed to acclimate better culturally and linguistically to the U.S. and would potentially need to attend a prep school before entering Gonzaga or redshirting if eligible. In February 2016, Hachimura claimed to understand 80 percent of English but speak only 30-40 percent of it. By April 2016, Hachimura was still working toward passing the SAT to gain entrance to college. In May 2016, Hachimura announced that he met the SAT and GPA requirements to be eligible to play at Gonzaga beginning as early as fall 2016. He planned to play as a true freshman and did not redshirt his first year.

Hachimura made his regular season debut for the Gonzaga Bulldogs on November 11, 2016, against Utah Valley, recording one point and three rebounds in four minutes. As a result, he became the fifth Japanese-born player to ever play NCAA Division I basketball. On December 1, he scored a season-high 10 points in 13 minutes in a 97–63 win over Mississippi Valley State. Hachimura scored eight points on February 23, 2017, against San Diego, helping his team win the West Coast Conference (WCC) title. On March 16, 2017, after playing one minute against South Dakota State, he became the first Japanese native to ever appear in the NCAA Division I men's tournament. Through 28 games as a freshman, Hachimura averaged 2.6 points and 1.4 rebounds while shooting 53 percent from the field in 4.6 minutes per game.

Coming into his junior season, Hachimura was named to the Preseason All-WCC Team. He opened the regular season on November 6, 2018 by scoring 33 points in a 120–79 win over Idaho State. On November 21, 2018, Hachimura recorded 20 points, 7 rebounds, and 5 assists to help upset No. 1-ranked Duke in the Maui Invitational finals. Subsequently, he was named most valuable player of the tournament. Hachimura was selected the 2019 WCC Player of the Year. He led Gonzaga in scoring (19.7ppg) during the 2018-19 season and also averaged 6.5 rebounds a contest.

On April 15, 2019, Hachimura announced that he would forgo his final year of eligibility and declare for the 2019 NBA draft. Hachimura was drafted 9th overall in the 2019 NBA Draft by the Washington Wizards. Hachimura is the second Japanese-born player to be drafted into the NBA after Yasutaka Okayama, and also the first Japanese player ever taken in the first round. On October 23, 2019, Hachimura made his debut in the NBA, posting a double-double (14 points, 10 rebounds) as a starter in a 100–108 loss to the Dallas Mavericks. On December 1, 2019, Hachimura scored a career-high thirty points in a 125–150 loss to the Los Angeles Clippers along with nine rebounds, three assists and a steal. Hachimura suffered a groin injury against the Detroit Pistons on December 16 and had surgery. He was forced to miss several games.