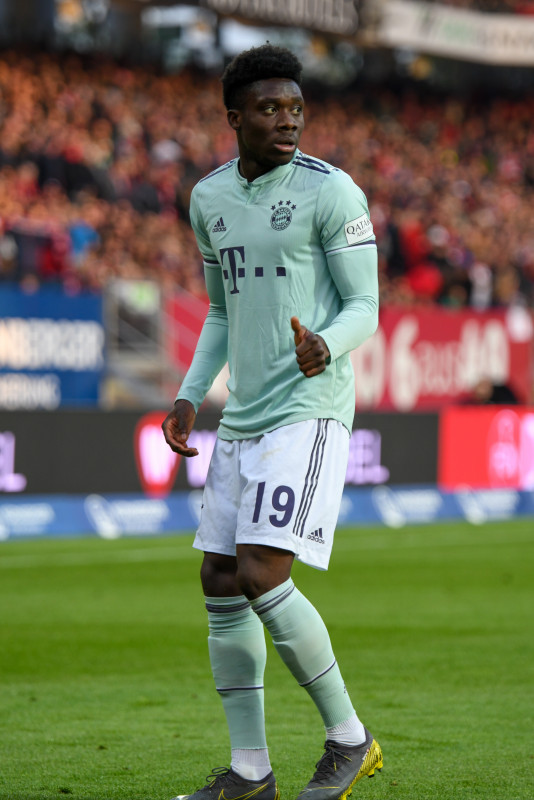 Alphonso Boyle Davies (born November 2, 2000) is a Canadian professional soccer player who plays as a left-back or winger for Bundesliga club Bayern Munich and the Canada national team.

After playing for Edmonton Internationals, and Edmonton Strikers, Davies joined the Whitecaps FC Residency in 2015 at the age of 14.

After joining Vancouver Whitecaps FC during their 2016 MLS preseason tour, Davies signed with Whitecaps FC 2 in the USL on February 23, 2016. At the time of his signing, he became the youngest player signed to a USL contract at 15 years, 3 months. Davies made his professional debut for Whitecaps FC 2 at the age of 15 years, 5 months in April 2016. On May 15, 2016, he scored his first professional goal, making him the youngest goal scorer in USL history at 15 years, 6 months, a record held by Davies until 2020. He scored two goals in 11 games played during the 2016 season.

On July 15, 2016, Davies signed a first team contract with the Whitecaps through 2018, with options for the 2019 and 2020 seasons. At the time of his signing, he was the youngest active player in Major League Soccer, and the third youngest player to have signed an MLS contract. Davies made his MLS debut on July 16, 2016, becoming the second youngest player to play in MLS, behind Freddy Adu. In September 2016, he scored his first goal for the first team in the 2016–17 CONCACAF Champions League against Sporting Kansas City in injury time to send the club through to the knockout round. In September 2016, Davies became the second youngest starter in MLS history when he started a game against the Colorado Rapids. On October 2, 2016 he started against rival club Seattle Sounders FC earning a penalty kick. During the 2016 season, Davies played in eight MLS games, four Canadian Championship games, and three games in the CONCACAF Champions League.

Following his impressive early MLS appearances, Davies attracted interest and was scouted by European clubs including Manchester United, Chelsea, and Liverpool, and was also named one of the 60 best young soccer talents in the world in 2017. In the 2018 season opener against the Montreal Impact, Davies scored his first goal in MLS action, and assisted on a Kei Kamara goal. On June 10, 2018, he scored a goal and got three assists in a 5–2 win over Orlando City. Davies scored two goals and provided two assists to help his side defeat Minnesota United with a 4–2 victory on July 29. On June 29, 2018, Davies was included in the MLS All-Star roster for the 2018 MLS All-Star Game on August 1 against Juventus. Davies made an appearance during the match, which finished as a 3–5 penalty shoot-out loss following a 1–1 draw. Davies was named the Vancouver Whitecaps FC Player of the Year on October 24, and also received the Whitecaps' Goal of the Year award. In Davies' final game for Vancouver on October 28, he scored both goals in a 2–1 victory over the Portland Timbers.

Being Ghanaian-born and of Liberian descent, Davies was eligible to play for both the Ghana national team and Liberia national team. On June 6, 2017, Davies passed his citizenship test and officially became a citizen of Canada, making him eligible to play for the Canada national team. On the same day, Davies was added to a senior team camp for a friendly against Curaçao, as well as Canada's preliminary 40-man roster for the 2017 Gold Cup. Davies would debut for the senior team in the friendly against Curaçao at the age of 16, making him the youngest player to play for the national team. On June 27, Davies was named to the final 23-man squad for the 2017 Gold Cup. In Canada's first match of that tournament, Davies scored twice in a 4–2 victory over French Guiana. The goals make him the youngest goalscorer in Gold Cup history. He then scored in their second match against Costa Rica to earn a 1–1 draw. Davies went on to win the Golden Boot as the tournament's top scorer, the Young Player of the Tournament award, and was included in the tournament's Best XI selection.

Davies was born to Liberian parents in Buduburam, a refugee camp in Ghana. His father, Debeah Davies, and his mother, Victoria Davies, originally lived in Monrovia, the capital of Liberia. They fled during the Second Liberian Civil War, which displaced more than 450,000 Liberians. When Alphonso was five, his family moved to Canada, eventually relocating to Edmonton. On June 6, 2017, he received Canadian citizenship; up until then he was a Liberian national. Alphonso was the fourth youngest of six siblings.

He has been in a relationship with Canadian forward Jordyn Huitema of Paris Saint-Germain since September 2017. In September 2019, he was fined €20,000 for arriving late to a Bayern practice after visiting Huitema in Paris, and by June 2020, French press were aware that Davies might be interested in having Huitema sign with Bayern's women's side.

On July 25, 2018, Vancouver announced that it had agreed to a multi-million-dollar transfer of Davies to Bundesliga club Bayern Munich, with Davies seeing out the 2018 MLS season with Vancouver, before joining Bayern in January 2019. The base fee for the transfer was US$13.5 million, with performance-related bonuses that total $22 million, a then-record for MLS, later eclipsed by the transfer of Miguel Almirón to Newcastle United. Davies had his first training session with Bayern on November 21, 2018, and debuted on January 12, 2019 against Borussia Mönchengladbach in the Telekom Cup championship finale, which Bayern won on penalties following a scoreless draw. Davies made his Bundesliga debut on January 27 against VfB Stuttgart, appearing as a late substitute for Kingsley Coman in a 3–1 victory. He scored his first goal for Bayern on March 17, netting the final goal in a 6–0 rout of Mainz 05. In doing so, and at the age of 18 years, 4 months and 15 days, he became the youngest player since Roque Santa Cruz, twenty years prior, to score for the club. He is the first Canadian international to score for Bayern. On May 18, 2019, Davies won his first Bundesliga title as Bayern finished two points above Dortmund with 78 points. A week later, Davies won his first DFB-Pokal as Bayern defeated RB Leipzig 3–0 in the 2019 DFB-Pokal Final. Davies was not selected for the match day squad.

Davies was the first player born in the 2000s to play in a Major League Soccer match. Davies joined Bayern in January 2019 from MLS side Vancouver Whitecaps FC on a contract lasting until 2023 for a then-MLS record transfer fee. Davies was named the Bundesliga Rookie of the Season for 2019–20.

On May 30, 2019, Davies was named to the squad for the 2019 CONCACAF Gold Cup. Davies was called up for a pair of 2019–20 CONCACAF Nations League A matches against Cuba on September 7 and 10, 2019. In the second match, Davies scored the decisive goal in a 1–0 victory for Canada. In October 2019, Davies would help lead Canada to their first win over the United States in 34 years, scoring the opening goal of their CONCACAF Nations League match, which ended 2–0.

Davies made his first Bundesliga start with Bayern on matchday nine of the 2019–20 Bundesliga season, going the full 90 minutes in a 2–1 home victory over Union Berlin. He made his first UEFA Champions League start on November 6, 2019, in a 2–0 victory against Olympiacos. Throughout the 2019–20 season, Davies played as a left back to allow David Alaba to play at centre back. Davies earned high praise during his time in that role, gaining an early reputation as one of the best left backs in the world. On February 25, 2020, Davies set-up Robert Lewandowski's goal in a 3–0 away win over Chelsea in the first leg of the round of 16 of the UEFA Champions League; his performance during the match was widely praised in the media, with pundit Gary Lineker commenting that Davies played "beautifully," while former U.S. international Stuart Holden described him as a "world class left back."

In April 2020, Bayern Munich and Davies agreed to a contract extension to 2025, adding two years onto his existing contract.

Following the restart of the Bundesliga which had halted all matches due to the COVID-19 pandemic, Davies started against both Eintracht Frankfurt and Borussia Dortmund. He scored and assisted in the Frankfurt match and ended up running down Dortmund's Erling Haaland at a speed of 35.3 kilometres per hour (21.9 mph). On June 16, 2020, Davies featured for Bayern against Werder Bremen in a game they won 1–0, securing Bayern Munich their eighth consecutive league title. Davies was sent off in the 79th minute for a second yellow card, but not before breaking the record for the fastest speed clocked in the Bundesliga at 36.51 kilometres per hour (22.69 mph). Davies was named the Bundesliga Rookie of the Year for the 2019–20 season. On August 14, 2020, Davies, who was playing the left-back position, was applauded for assisting Joshua Kimmich's goal against Barcelona in the Champions League quarter-finals which Bayern Munich won with an impressive final score of 8–2. On August 23, he started in the Champions League final against Paris Saint-Germain, which Bayern won 1–0 to complete a continental treble; consequently, Davies became the first Canadian male international to win the Champions League.