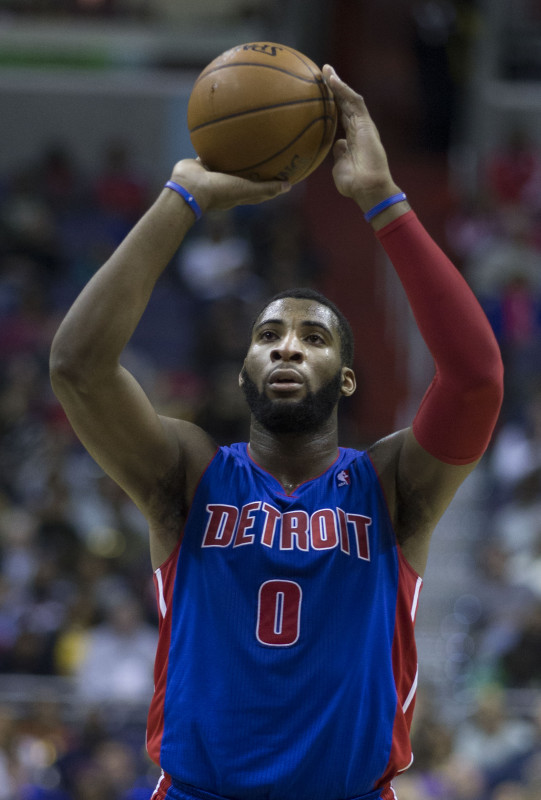 On January 20, 2016, Drummond set an NBA record for free throws missed in a game with 23, surpassing the previous record of 22 set by Wilt Chamberlain on December 1, 1967. He also set a career high and franchise record by attempting 36 free throws. On January 28, Drummond earned his first NBA All-Star Game selection as a reserve for the Eastern Conference in the 2016 NBA All-Star Game. During the All-Star weekend, he also participated in the Slam Dunk Contest. On February 27, he recorded his league-leading 50th double-double of the season with 15 points and 17 rebounds in a 102–91 win over the Milwaukee Bucks. On March 2, Drummond recorded nine points and 14 rebounds against the San Antonio Spurs, ending his career high and the league's season high of consecutive double-doubles at 13 straight. The Pistons finished the regular season as the eighth seed in the Eastern Conference with a 44–38 record, earning a playoff berth for the first time since 2009. They went on to be swept in their first-round match-up against the eventual NBA champions, the Cleveland Cavaliers, in a highly competitive series.

On December 14, Drummond recorded 12 points, 19 rebounds and a career-high eight assists in a 105–91 win over the Atlanta Hawks. On January 24, Drummond recorded 30 points, 24 rebounds, six blocked shots, four assists and three steals in a 98–95 overtime loss to the Utah Jazz. He became the first player to record such stats in a game since 1973–74, when the NBA first began to record blocks and steals. During the game, Drummond reached 2,000 offensive rebounds for his career, becoming the youngest player to reach the milestone at 24 years, 167 days, surpassing the previous record held by Howard at 25 years, 86 days. On January 30, he was named as a replacement for John Wall in the 2018 NBA All-Star Game. On February 3, he recorded 23 points, 20 rebounds, four steals and four blocks in a 111–107 win over the Miami Heat. Drummond had at least 20 points and 20 rebounds for the sixth time in 2017–18 and became the first player with at least 20 points, 20 rebounds, four steals and four blocks since Hakeem Olajuwon on December 22, 1989. Four days later, he recorded 17 points and a season-high 27 rebounds in a 115–106 win over the Brooklyn Nets. On March 29, he recorded 24 points and 23 rebounds in a 103–92 win over the Washington Wizards. It was his 20th 20/20 game of his career, the most of any NBA player since he joined the league in 2012. Drummond concluded the regular season averaging 16 rebounds per game, becoming the first player since Rodman in 1997 to average 16 rebounds per game in a season and only the second player in the last 40 years.

On October 23, 2017, Drummond recorded 14 points and 14 rebounds in a 97–86 loss to the Philadelphia 76ers. He moved into sixth place on Detroit's career rebounding list, passing Walter Dukes. Two days later, in a 122–101 win over the Minnesota Timberwolves, Drummond recorded his 5,000th career rebound in the first quarter, becoming the sixth Pistons player to reach that total. At 24 years, 76 days, he became the second-youngest player to reach the milestone, trailing only Dwight Howard (23 years, 112 days). On November 10, he recorded 16 points, 20 rebounds and a then career-high seven assists in a 111–104 win over the Atlanta Hawks, moving the Pistons to a 9–3 record—their best start to a season since the 2005–06 season. Drummond went on to become the first player to grab at least 200 rebounds in the first 13 games of two different seasons since Dennis Rodman did it three times for three different teams in the 1990s. On November 27, he recorded season highs of 26 points and 22 rebounds in a 118–108 win over the Boston Celtics. He also had six assists and four steals, becoming the first player with that many points, rebounds, assists and steals since Charles Barkley in January 1990.

Andre Jamal Drummond (born August 10, 1993) is an American professional basketball player for the Los Angeles Lakers of the National Basketball Association (NBA). He was selected by the Detroit Pistons in the first round of the 2012 NBA draft with the ninth overall pick. A two-time NBA All-Star, he has led the league in rebounding four times and also been named to the All-NBA Third Team. He previously played for the Cleveland Cavaliers.

Born in Mount Vernon, New York to Jamaican parents, Drummond moved to Middletown, Connecticut as a 7-year-old with his mother and sister, then went to Woodrow Wilson Middle School before starting high school at Capital Preparatory Magnet School in Hartford, Connecticut. During his freshman year, he averaged 12.7 points, 11.9 rebounds and 6.5 blocks per game. He improved during his sophomore year at Capital Prep, averaging 20.2 points, 16.6 rebounds, 7.2 blocks and 4.5 steals per game. After two years at Capital Preparatory Magnet School, he transferred to St. Thomas More. At St. Thomas More in Oakdale, Connecticut, Drummond was one of the most dominating centers in high school basketball. He spent two years at St. Thomas More and led the team to the national prep championship in 2011. He graduated in the spring that year.

Drummond initially declared he would spend a post-graduate year at Wilbraham & Monson Academy in 2011–12. Two weeks later on August 26, 2011, he announced via Twitter that instead he intended to attend the University of Connecticut. According to ESPN, the decision "created a media frenzy due to the sheer surprise." Drummond had also been considering attending Kentucky, Louisville, Georgetown, or West Virginia.

Drummond was one of the top-rated basketball players in the high school class of 2011, and played one season of college basketball with the Connecticut Huskies before declaring for the draft. He was named to the NBA All-Rookie Second Team in 2013, and was named an All-Star for the first time in 2016. He has perennially been among the league leaders in rebounding. Drummond was a member of the 2014 U.S. national team that won a gold medal in the FIBA Basketball World Cup.

On November 5, 2018, Drummond recorded 25 points and 24 rebounds in a 120–115 overtime loss to the Miami Heat. On January 16, in a 120–115 overtime win over the Orlando Magic, Drummond had 14 points, 11 offensive rebounds and 11 defensive rebounds to record his 11th career "Moses Malone triple-double"—Malone had such a triple-double 24 times, while Dennis Rodman did so 17 times. On January 31, Drummond recorded 24 points and 20 rebounds in a 93–89 victory over the Dallas Mavericks. During the game, he became the Pistons' all-time career leader in offensive rebounds with 2,431, surpassing the previous record held by Bill Laimbeer. On February 8, he had his ninth 20/20 game of the season with 29 points and 20 rebounds in a 120–103 win over the New York Knicks.

On February 6, 2020, the Pistons traded Drummond to the Cleveland Cavaliers, in exchange for Brandon Knight, John Henson, and a 2023 second-round draft pick. On March 26, 2021, the Cavaliers waived Drummond.

On March 28, 2021, Drummond signed with the Los Angeles Lakers, adding an offensive boost to a team without injured stars LeBron James and Anthony Davis.