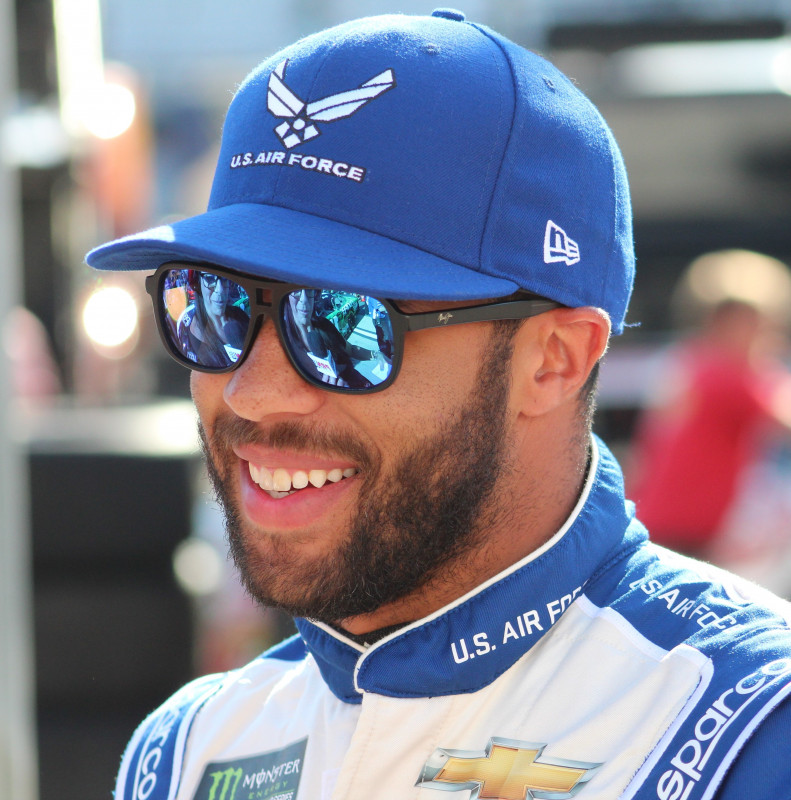 On October 26, 2013, Wallace became the first African-American driver to win in one of NASCAR's national series since 1963, winning the Camping World Truck Series Kroger 200 at Martinsville Speedway. The only previous win by an African-American driver was by Wendell Scott in the Grand National Division on December 1, 1963. Wallace finished 8th in points in his rookie season.

After Aric Almirola announced his departure from Richard Petty Motorsports, team owner Richard Petty announced in an interview that he and the team were working on hiring Wallace as the new driver of the No. 43 in 2018. Wallace was officially introduced to the team as their new driver on October 25, 2017. He is the first African-American driver to have a full-time Cup ride since Wendell Scott in 1971.

In 2010, Wallace began competing in the NASCAR K&N Pro Series East, a regional and developmental series. Wallace drove for Rev Racing as part of NASCAR's Drive for Diversity program, and was signed as a development driver for Joe Gibbs Racing. He won his very first race in the series, at Greenville-Pickens Speedway, becoming the youngest driver ever to win at the track, he was also the youngest, which began as the Busch North Series in 1987. He also won later in the year at Lee USA Speedway in New Hampshire, on his way to finishing third in series points and winning the series' Rookie of the Year award. He was the first African American to win the Rookie of the Year award in a NASCAR series. Wallace's 2011 season would see him winning three times, at Richmond International Raceway, Columbus Motor Speedway, and Dover International Speedway, and he finished second in points to Max Gresham.

William Darrell "Bubba" Wallace Jr. (born October 8, 1993) is an American professional stock car racing driver. He competes full-time in the NASCAR Cup Series, driving the No. 23 Toyota Camry for 23XI Racing. Previously, Wallace was signed as a development driver for Joe Gibbs Racing where he competed in the Camping World Truck Series, driving the No. 54 Toyota Tundra for Kyle Busch Motorsports. He also raced in the Xfinity Series, driving the No. 6 Ford Mustang of Roush Fenway Racing, from 2015 to mid 2017. Wallace is noted for being one of the most successful African American drivers in the history of NASCAR.

Wallace started racing in the Bandolero and Legends car racing series, as well as local late model events, at the age of nine. In 2005, he won 35 of the Bandolero Series' 48 races held that year; in 2008 he became the youngest driver to win at Franklin County Speedway in Virginia.

On June 5, 2017, Richard Petty Motorsports announced plans to have Wallace drive the team's No. 43 Ford in place of injured Aric Almirola, making Wallace the first African-American to race in the Cup Series since Bill Lester in 2006. In qualifying for his Cup debut at the Pocono 400, he was able to advance to the second round and start 16th. During the race, Wallace suffered from speeding penalties on pit road, including one while he was serving an earlier pass-through penalty; at one point, he nearly missed his pit stall because he looked for his Xfinity pit sign instead of the No. 43. He went on to finish 26th and one lap down. After congratulating Ryan Blaney in Victory Lane, Wallace passed out and required medical attention. He later stated, "This is the third time this is happened. I get so pissed off at myself that I just pass out."

In February 2013, it was announced that Wallace would run a full season in the Camping World Truck Series in the No. 54 Toyota owned by Kyle Busch Motorsports. At Rockingham Speedway in April Wallace, following accidental contact with Ron Hornaday Jr., was turned by Hornaday under a caution flag, his truck hitting the outside wall. Hornaday was penalized for the contact by being sent to the rear of the field; after the race Hornaday was penalized 25 championship points and assessed a $25,000 fine, in addition to being placed on probation for the remainder of the season. The situation was compared to an incident at the 2011 WinStar World Casino 350K where Kyle Busch deliberately wrecked Hornaday at Texas Motor Speedway.

In 2014, Wallace returned to the Camping World Truck Series full-time in the No. 54. In June, Wallace won the Drivin' for Linemen 200 at Gateway Motorsports Park. Three weeks later, he battled Kyle Larson and Ron Hornaday Jr. for the win at Eldora Speedway. Wallace held off a hard charging Larson, who wrecked his car trying to catch him, and beat Hornaday by a 5.489-second margin to win the second annual Mudsummer Classic. Wallace switched to the No. 34 for the Kroger 200 at Martinsville in tribute to Wendell Scott, and led the most laps en route to his second straight victory in the race. Wallace won his final race with KBM, the season finale at Homestead Miami Speedway, beating Larson again to earn his first non-short track victory. Wallace's four wins along with nine top fives and 14 top tens led to a third-place finish in points.

Following the 2014 season, it was expected that Wallace would move up to the Xfinity Series with Joe Gibbs Racing in a full-time ride, with owner Joe Gibbs claiming they would have "a big program" for the young driver. After the team struggled to find sponsorship for more than 15 races, on December 8, 2014, Wallace announced he had been granted his request to leave JGR and seek other opportunities. Later, it was reported he had signed a deal to compete in the Xfinity Series for Roush Fenway Racing for 2015 with Chad Norris as his crew chief. On December 18, 2014, RFR officially announced that they had signed Wallace to compete full-time in the No. 6 Ford Mustang in 2015, with sponsors and crew members to be announced at a later date. On January 28, 2015, at NASCAR Media Day, it was announced that Wallace would drive the No. 6 Ford EcoBoost Mustang. Wallace started the season with a 12th-place finish at Daytona and earned 14 top-tens to finish 7th in the final point standings. He was beat by Daniel Suárez for Rookie of the Year by a single top-ten finish.

In May 2020, after the killing of George Floyd by police officers in Minneapolis, Wallace began to speak out about the abuse of African Americans by the police, becoming the face of stock car racing's involvement in the Black Lives Matter movement. On June 8, 2020, he called on NASCAR to prohibit displays of the Confederate battle flag at NASCAR races. In 2015, after the publication of photographs showing the white man who killed nine black churchgoers in Charleston, South Carolina, posing with the flag, the organization began asking fans not to display the flag at its races. However, many fans in the South continued to hoist the Confederate flag at races. On June 10, 2020, NASCAR officially banned the display of the flag at its events.

In 2017, Wallace voiced the character Bubba Wheelhouse in the 2017 Pixar film Cars 3.

In 2018, Wallace returned to K&N East at Watkins Glen driving the No. 27 Chevrolet for Jefferson Pitts Racing in order to provide him with extra road course seat time before the Cup Series race later that weekend.

A day after the race, an investigation by the FBI concluded that Wallace was not the victim of a hate crime: the alleged noose was a pull-down rope with a loop that was located on an overhead door, and had been in the garage since the fall Talladega race in 2019. The FBI's determination led to people criticizing Wallace on social media as "fake" and questioning his integrity. Wallace stated in interviews that although he was relieved that he wasn't specifically targeted, he was frustrated by the backlash he received. He nonetheless vowed not to let the incident or the subsequent "hoax" allegations "break" him. He added that regardless of "whether tied in 2019" or "wasn't directed at me, but somebody tied a noose".

In 2019, Wallace revealed that he dealt with and continues to deal with depression for most of his racing career. After others reached out to him to thank him for bringing awareness to depression, Wallace said he did not know it was such a widespread problem; for him, being depressed was an honest answer to a media question.

Wallace is a Christian. In an interview with Esquire in 2020, Wallace clarified that his criticism of Michael McDowell after an incident at that year's All-Star Race was not meant as an attack on McDowell's Christian faith as some had perceived. "A lot of people took that as attacking his faith and it definitely wasn't that. I have nothing against that. I'm a Christian myself. When you go disrespectful, then that shows the character that you are. That's what I was getting at." Wallace's wrecked front bumper from the incident was put up for auction and raised $20,034 for the Christian non-profit organization Motor Racing Outreach.

On June 21, 2020, a member of Wallace's team reported to NASCAR that a noose had been placed in Wallace's garage stall at Talladega Superspeedway, which NASCAR president Steve Phelps relayed to Wallace in the evening. The organization condemned the act as "heinous" and said they would consult with law enforcement. Wallace stated that he was "incredibly saddened" by the "painful reminder of how much further we have to go as a society and how persistent we must be in the fight against racism", but also praising his fellow drivers that are "driving real change and championing a community that is accepting and welcoming of everyone". Before the GEICO 500 race the next day, the drivers and crews pushed Wallace's car to the front of pit road in a show of solidarity, a gesture that drivers Jimmie Johnson and Kevin Harvick proposed.

On June 25, 2020, NASCAR released a photo of the noose taken by security. In a teleconference later that day, Phelps explained NASCAR had inspected every garage at the sanctioning body's 29 tracks, with 11 garages containing pull-down ropes tied in knots but only Wallace's being tied into a noose. Although the individual responsible was not identified, Phelps announced that NASCAR would require sensitivity and unconscious bias training for its personnel and that "Bubba Wallace and the 43 team had nothing to do with this."