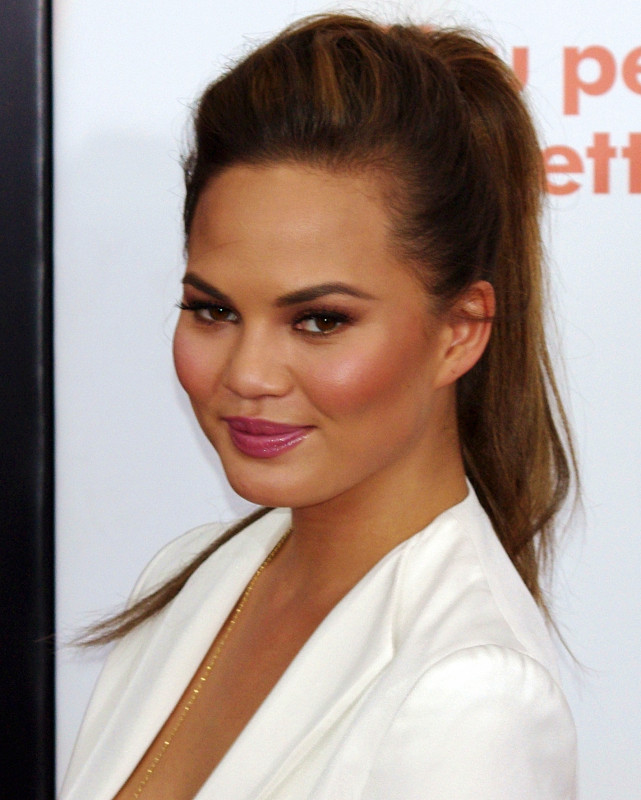 Christine Diane Teigen (born November 30, 1985) is an American model, television personality, author, and entrepreneur. She made her professional modeling debut in the annual Sports Illustrated Swimsuit Issue in 2010 and later appeared on the 50th anniversary cover alongside Nina Agdal and Lily Aldridge in 2014. She formerly appeared as a panelist on the syndicated daytime talk show FABLife (2015–2016). She co-hosts the musical competition series Lip Sync Battle (2015–present) with LL Cool J and serves as a judge on the comedy competition series Bring the Funny (2019–present). Teigen has also authored two cookbooks.

Teigen was a briefcase model on the game show Deal or No Deal during the pilot and first season. She appeared in the Sports Illustrated swimsuit issue in 2010, and was named "Rookie of the Year". Her friend and fellow model Brooklyn Decker had introduced her to the people at Sports Illustrated to cast her. The following year, she designed and debuted a capsule collection with swimwear designer DiNeila Brazil at Mercedes-Benz Fashion Week Swim in Miami as well as appeared as a featured character in the 2011 Electronic Arts video game Need For Speed: The Run. She also filmed a Cooking Channel special titled Cookies and Cocktails.

Teigen became engaged to singer John Legend in December 2011, after four years of dating. The couple first met while filming his 2006 music video for the song "Stereo", in which she played his love interest. They married in September 2013, celebrating their wedding on September 14 in Como, Italy. Legend's song "All of Me" was dedicated to her. They reside in Beverly Hills, California.

Two years later, she was the host of the competition series Model Employee on VH1. She was also featured on another Cooking Channel special, titled Chrissy Teigen's Hungry, detailing her wedding menu tasting with then-fiancé, John Legend. In October 2013, she appeared in Legend's music video for the song "All of Me", which also features footage from their wedding. In April 2014, Teigen played a fictionalized version of herself as a relationship counselor in an Inside Amy Schumer sketch. That same year, she appeared on the 50th anniversary cover of the Sports Illustrated Swimsuit Issue with Nina Agdal and Lily Aldridge. In January 2015, Teigen guest starred on the sitcom The Mindy Project as the girlfriend of the man who took the main character's virginity. In April, she became a co-host of the musical competition series Lip Sync Battle alongside LL Cool J. Teigen co-hosted the 2015 Billboard Music Awards with Ludacris.

Teigen identifies as a feminist and intends on raising her children as such. Teigen made donations to nonprofit organization Planned Parenthood in 2015 following the Colorado Springs Planned Parenthood shooting and again in 2017. She and her husband donated $25,000 to March for Our Lives, a rally against gun violence, in 2018. A supporter of immigrants' rights, she delivered a speech at a Families Belong Together event in Los Angeles that same year. In May 2020, Teigen donated $200,000 to bail and legal defense funds to aid activists arrested during protests in response to the killing of George Floyd.

From September 2015 until June 2016, she was a food stylist and panelist on Tyra Banks's syndicated daytime talk show, FABLife. In February 2016, Teigen published a book titled Cravings: Recipes for All of the Food You Want to Eat, which went on to become a New York Times bestseller and the second-best selling cookbook of the year. The following year, she released a clothing line in collaboration with the fashion company Revolve. In September 2018, Teigen released her second book, titled Cravings: Hungry For More. Simultaneously, she released a line of cookware through Target.

Teigen and Legend have two children: a daughter born in April 2016, and a son born in May 2018. In 2020, the couple was expecting a third child, but Teigen suffered a stillbirth in September.

Teigen is a vocal critic of former U.S. President Donald Trump. In June 2018, she donated $72,000 to the American Civil Liberties Union, a nonprofit organization, to commemorate Trump's 72nd birthday. Teigen and her husband endorsed Elizabeth Warren during the 2020 Democratic Party presidential primaries. The couple endorsed Joe Biden in the 2020 United States presidential election.

The following year, Teigen appeared as a judge for the comedy competition series Bring the Funny. In November, Teigen launched a cooking website, Cravings by Chrissy Teigen, which features recipes as well as restaurant and entertaining tips. Chrissy's Court, a courtroom-style series starring Teigen, debuted in April 2020 on Quibi. Teigen also served as executive producer for the series.