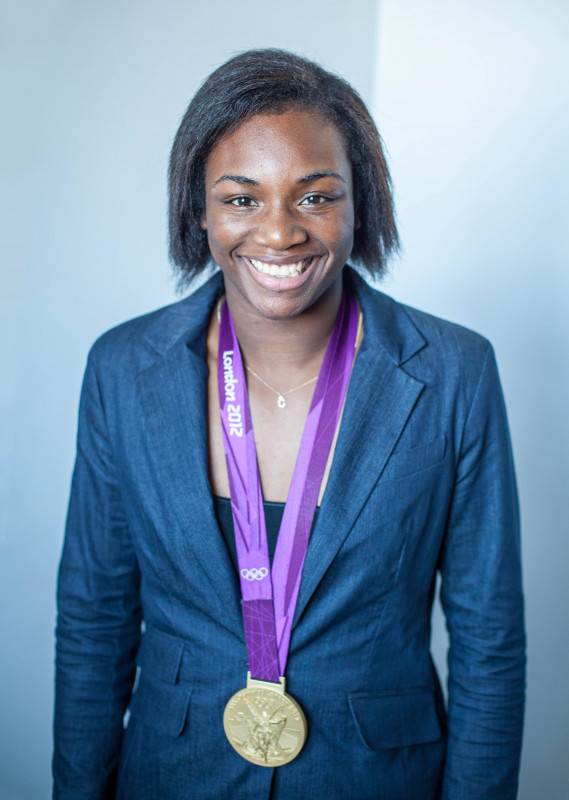 Claressa Maria Shields (born March 17, 1995) is an American professional boxer and mixed martial artist. She has held multiple world championships in three weight classes, including the undisputed female light middleweight title since March 2021; the undisputed female middleweight title from 2019 to 2020; and the unified WBC and IBF female super middleweight titles from 2017 to 2018. Shields currently holds the record for becoming a two and three-weight world champion in the fewest professional fights. As of November 2020, she is ranked as the world's best active female light middleweight by The Ring and BoxRec, as well as the best active female boxer, pound for pound, by Lineal Boxing Champion and ESPN, second by The Ring, and fourth by BoxRec.

After winning two Junior Olympic championships, Shields competed in her first open-division tournament, the National Police Athletic League Championships 2011; she won the middleweight title and was named top overall fighter and also qualified for the U.S. Olympic Trials. At the 2012 Olympic Trials, she defeated the reigning national champion, Franchón Crews-Dezurn, the 2010 world champion, Andrecia Wasson, and Pittsburgh's Tika Hemingway to win the middleweight class. In April 2011, she won her weight class at the Women's Elite Continental Championships in Cornwall, Ontario against three-time defending world champion Mary Spencer of Canada; she held an undefeated record of 25 wins and 0 losses at that point.

In a decorated amateur career, Shields won gold medals in the women's middleweight division at the 2012 and 2016 Olympics, making her the first American boxer—female or male—to win consecutive Olympic medals. Shields was the youngest boxer at the February 2012 U.S. Olympic Trials, winning the event in the 165 lb (75 kg) middleweight division. In May, she qualified for the 2012 games, the first year in which women's boxing was an Olympic event, and went on to become the first American woman to win an Olympic gold medal in boxing. Her only loss professional or amateur comes from British fighter Savannah Marshall. In 2018, the Boxing Writers Association of America named her the Female Fighter of the Year.

Shields was born and raised in Flint, Michigan, where she was a high school junior in May 2012. She was introduced to boxing by her father, Bo Shields, who had boxed in underground leagues. Bo was in prison from the time Shields was two years old, and released when she was nine. After his release, he talked to her about boxer Laila Ali, piquing her interest in the sport. Bo, however, believed that boxing was a men's sport and refused to allow Shields to pursue it until she was eleven. At that time she began boxing at Berston Field House in Flint, where she met her coach and trainer, Jason Crutchfield. Shields credits her grandmother with encouraging her to not accept restrictions based on her gender.

In 2014, Shields won the World Championship gold medal, and the following year, she became the first American to win titles in women's boxing at the Olympics and Pan American Games.

Shields attempted to adopt her cousin's daughter in 2014.

Shields is the subject of the 2015 documentary "T-Rex: Her Fight for Gold." In 2016 Universal Pictures, a division of Comcast, which holds Olympic broadcast rights in the United States, acquired the rights to produce a film about her life story. Barry Jenkins is the screenwriter. Entitled "Flint Strong", Rachel Morrison will be directing, with actress Ryan Destiny portraying Shields.

In 2017, Shields won the Nickelodeon Kids' Choice Sports Award for "Biggest Powerhouse." In 2018, Shields was inducted into the USA Boxing Alumni Association's Hall of Fame. The Boxing Writers Association of America gave her the 2018 Christy Martin Award - Female Fighter of the Year.

On March 10, 2017, she faced Szilvia Szabados for the North American Boxing Federation middleweight title, and won. This was the main event on ShoBox, with a regional title fight between Antonio Nieves and Nikolai Potapov serving as the co-main event. It was the first time a women's boxing bout was the main event on a United States premium network card.

On June 16, 2017, Shields headlined the "Detroit Brawl," facing Sydney LeBlanc in her first scheduled eight-round bout. LeBlanc signed on with three days notice, after Mery Rancier dropped out due to visa issues. Shields won the bout by decision after all eight rounds.

In 2018, Shields acted in a Walmart ad directed by Dee Rees.

On January 12, 2018, Shields retained her WBC and IBF female super middleweight titles, and won the WBAN super-middleweight title by defeating 17-0 Tori Nelson. It was Shields' first time going all 10 rounds in her professional career.

On June 22, 2018, in just her sixth professional fight, Shields defeated Hanna Gabriel by unanimous decision, winning the vacant WBA and inaugural IBF middleweight belts, breaking the record for becoming a two-weight world champion in the fewest professional fights, a record previously held by Vasyl Lomachenko. During Round 1, she experienced the first knock down of her professional career. She dropped down from 168 pounds to 160 for the fight. This was her first fight with trainer John David Jackson, having worked with Jason Crutchfield for the previous 5.

On December 8, 2018, Shields' fight aired on HBO, her first appearance on the network, a fight which was a part of the last boxing card to occur on HBO.

On April 13, 2019, Shields became the undisputed women's middleweight world champion, unifying the WBA, WBC, IBF and WBO middleweight titles, along with The Ring magazine's inaugural middleweight belt, after defeating Christina Hammer by unanimous decision. The victory was a near shutout with two judges scoring the bout 98–91 while a third judge scored it 98–92.

Shields was scheduled to fight Ivana Habazin for the vacant WBO junior middleweight title in Flint, Michigan, on October 5, 2019. However, the fight was postponed due to Habazin's trainer being attacked at the weigh in.

On January 10, 2020, the battle between Shields and Habazin took place with an all female ring (referee). Claressa won by unanimous decision, 99–89, 100-90 and 100–89, and became the fastest ever to win titles in 3 divisions male or female in history.

In November 2020, Shields had signed a three-year contract with Professional Fighters League and was expected to make her mixed martial arts debut in 2021. Since Shields first announced that her MMA debut, she has also begun training in Brazilian Jiu-Jitsu and has gone to train under IBJJF no gi World Champion Roberto Alencar, alongside Holly Holm. She also started training at JacksonWink MMA in late 2020.

Shields made her MMA debut at PFL 4 on June 10, 2021 against Brittney Elkin. She won the fight via technical knockout in round three.