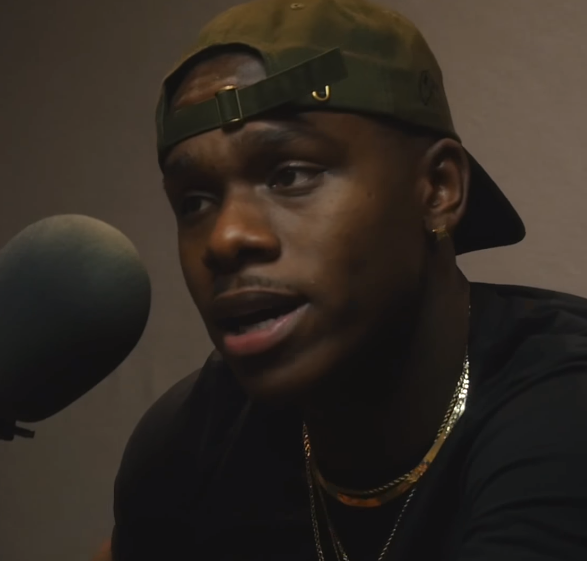 Jonathan Lyndale Kirk was born on December 22, 1991, in Cleveland, Ohio. He moved to Charlotte, North Carolina in 1999, where he would spend most of his early years. He attended Vance High School where he graduated in 2010. He attended the University of North Carolina at Greensboro for two years, but did not complete his studies, saying he only went to school for his parents' sake. He grew up listening to Eminem, 50 Cent and Lil Wayne with his two older brothers.

DaBaby began taking music seriously between 2014 and 2015. In 2015, he started off his music career by releasing Nonfiction, his debut mixtape. He later followed this up with his God's Work mixtape series, Baby Talk mixtape series, Billion Dollar Baby, and Back on My Baby Jesus Sh*t. He initially performed under the name Baby Jesus, which he eventually changed out of concern that it had become a distraction.

At the 62nd Annual Grammy Awards, held in 2020, DaBaby received two nominations, both for "Suge", in the categories Best Rap Performance and Best Rap Song. On April 13, 2020, he announced on Twitter that his third studio album, Blame It on Baby, would be released on April 17, 2020. The album received mixed to positive reviews, but achieved commercial success, debuting atop the Billboard 200 with 124,000 album-equivalent units, becoming DaBaby's second number-one album. It also produced DaBaby's highest-charting song, "Rockstar", featuring Roddy Ricch, which has spent seven weeks at number-one on the Billboard Hot 100, and reached number-one in the United Kingdom. In June, DaBaby was featured on the remix for the Jack Harlow's song, "Whats Poppin", which peaked at number two on the Hot 100 while "Rockstar" was still at the top. This made DaBaby the 20th act to occupy the chart's top 2 positions, and the first since Ariana Grande in 2019. In July, DaBaby was featured on "For the Night" by Pop Smoke and Lil Baby, which debuted at number six on the Hot 100. As a result, DaBaby became the seventh act to chart at least three songs in the top six simultaneously. On July 27, DaBaby released a new single with his signee Stunna 4 Vegas, titled "No Dribble", included on the deluxe edition of Blame It on Baby, which was released on August 4, 2020, and described by DaBaby as a "brand new album".

In January 2019, when DaBaby signed with Interscope, he began his own imprint label called Billion Dollar Baby Entertainment . On March 1, 2019, DaBaby's debut studio album Baby on Baby, was released via Interscope Records. He is also signed to South Coast Music Group and has a joint contract with both labels. The thirteen-track project features guest appearances from Offset, Rich Homie Quan, Rich the Kid and Stunna 4 Vegas. Baby on Baby debuted at number 25 on the Billboard 200 albums chart in the US. DaBaby's song "Suge", debuted on the Billboard Hot 100 at number 87 on the chart dated April 13, 2019, and later reached the top 10, on the chart dated June 8, 2019. DaBaby was featured on the cover of XXL's Freshman Class of 2019.

DaBaby was involved in an incident in Huntersville, North Carolina where a 19-year-old man was shot in the abdomen and died soon after. DaBaby confirmed his involvement in the shooting and said "he acted in self defense". The most serious charges were dropped in March 2019, and DaBaby pleaded guilty to carrying a concealed weapon, a misdemeanor.

DaBaby featured on various hit songs throughout mid-2019, including Megan Thee Stallion's "Cash Shit" and Quality Control's "Baby", both of which reached the top 40 on the Billboard Hot 100. On July 5, 2019, DaBaby was featured on Dreamville Records' newly released compilation album Revenge of the Dreamers, on the opening track, "Under the Sun". He received acclaim for his guest feature, with various publications ranking it as his best verse of 2019, including Complex magazine calling it a "defining breakout moment for a new rap superstar".

In August 2019, he announced that his second album would be titled Kirk, a tribute to his last name. It was released on September 27, and debuted atop the US Billboard 200. Its lead single, "Intro", was also successful, peaking at number 13 on the US Billboard Hot 100 chart. Around that time, DaBaby also made notable appearances on singles such as Post Malone's "Enemies", which peaked at number 16 on the Billboard Hot 100, and on the remixes to YG's "Stop Snitchin", Lizzo's "Truth Hurts", and Lil Nas X's "Panini", released on May 24, August 23, and September 13, 2019, respectively. On October 24, he made a cameo appearance in the music video for up-and-coming rapper Rich Dunk's breakthrough single "High School".

In January 2020, he was detained and questioned in Miami in connection with a robbery investigation. He was later arrested after authorities found he had a warrant out in Texas. The warrant stemmed from a battery charge. According to TMZ and other outlets, members of DaBaby's crew allegedly jumped and robbed a music promoter who only paid DaBaby $20,000 of the $30,000 he was owed for a performance in Miami. Reports state that DaBaby and his associates allegedly took $80 cash, an iPhone 7, and a credit card from the promoter. DaBaby was charged with battery and released from Miami-Dade County jail 48 hours later.

DaBaby got his big break after signing to Arnold Taylor, the president of the South Coast Music Group label, a big radio promoter. Taylor saw DaBaby perform around North Carolina clubs at the time he [Taylor] was launching his label. Taylor had been responsible in the early rise of Southern rap stars including Yo Gotti and Future. Once they started working together, the team kept building buzz around the South with mixtapes and club shows, while DaBaby was finding his sound. Through his deal with South Coast, DaBaby signed a short-lived distribution deal with Jay-Z's Roc Nation for his Blank Blank mixtape that would prove to be his breakout in late 2018. Thanks to the guidance of Taylor, and following major label bidding wars, DaBaby landed a seven-figure recording deal with Interscope.