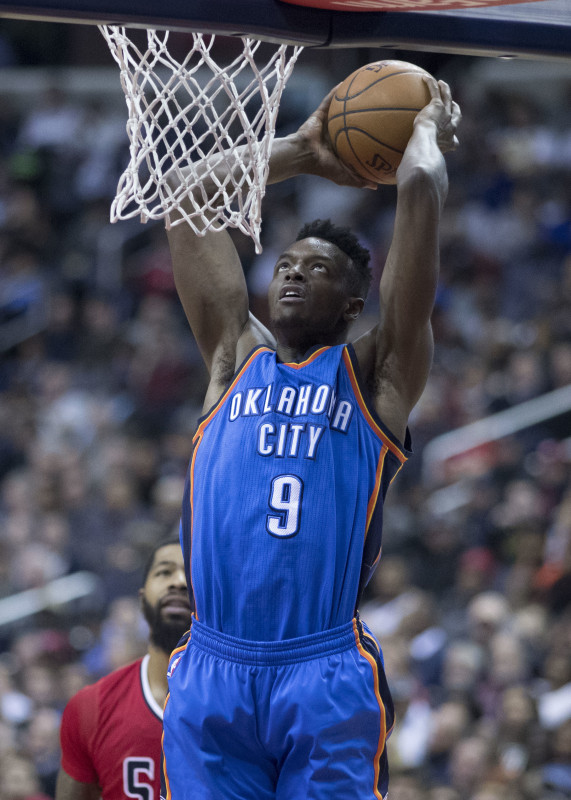 On June 26, 2014, Grant was selected with the 39th overall pick in the 2014 NBA draft by the Philadelphia 76ers, and joined the team for the 2014 NBA Summer League. On September 29, 2014, he signed a four-year deal with the 76ers, with two years guaranteed. On January 21, 2015, he recorded four points and eight blocks in a loss to the New York Knicks. The eight blocks were the most in a game for a 76er since Samuel Dalembert had nine on December 12, 2007, and the most by a 76ers' rookie since Shawn Bradley had nine on January 17, 1994. On February 2, he had a season-best game with 18 points and 7 rebounds in a loss to the Cleveland Cavaliers.

Houston Jerami Grant (born March 12, 1994) is an American professional basketball player for the Detroit Pistons of the National Basketball Association (NBA). He played college basketball for the Syracuse Orange and was drafted by the Philadelphia 76ers with the 39th pick in the 2014 NBA draft. Grant also played for the OKC Thunder and Denver Nuggets.

Grant attended DeMatha Catholic High School in Hyattsville, Maryland where as a senior in 2011–12, he averaged 12.5 points in 23 games.

Considered a four-star recruit by ESPN.com, Grant was listed as the No. 11 power forward and the No. 37 player in the nation in 2012.

In April 2014, Grant declared for the NBA draft, forgoing his final two years of college eligibility. He starts as a Guard but for his defensive skills he can play as Small Forward.

On November 1, 2016, Grant was traded to the Oklahoma City Thunder in exchange for Ersan İlyasova and a protected draft pick. He made his debut for the Thunder the following day in an 85–83 win over the Los Angeles Clippers, recording six points, two rebounds and two blocks in 18 minutes off the bench. On December 19, 2016, he scored a season-high 15 points in a 110–108 loss to the Atlanta Hawks. On February 1, 2017, he tied his season high mark with 15 points in a 128–100 loss to the Chicago Bulls.

On February 25, 2020, Grant scored a career-high 29 points in a 115–98 win over the Detroit Pistons. On September 15, 2020, in a Game 7 win against the favored Clippers, Grant outscored Paul George 14 to 10 while playing 9 minutes less. However, he struggled against LeBron James and Anthony Davis in the Western Conference Finals as the Nuggets fell to Los Angeles Lakers in five games. Grant scored 26 points in the Nuggets' Game 3 victory. Grant averaged 11.6 points and 3.3 rebounds in the playoffs.

On November 22, 2020, Grant signed a three-year, $60 million contract with the Detroit Pistons through a sign-and-trade with the Denver Nuggets. Detroit also received draft rights to 2015 second-round pick Nikola Radičević in exchange for cash considerations. On February 17, 2021, Grant scored a career-high 43 points in a 105–102 loss to the Chicago Bulls. Grant ended the season as a Most Improved Player award finalist, finishing second behind Julius Randle, while averaging a career high in points per game.