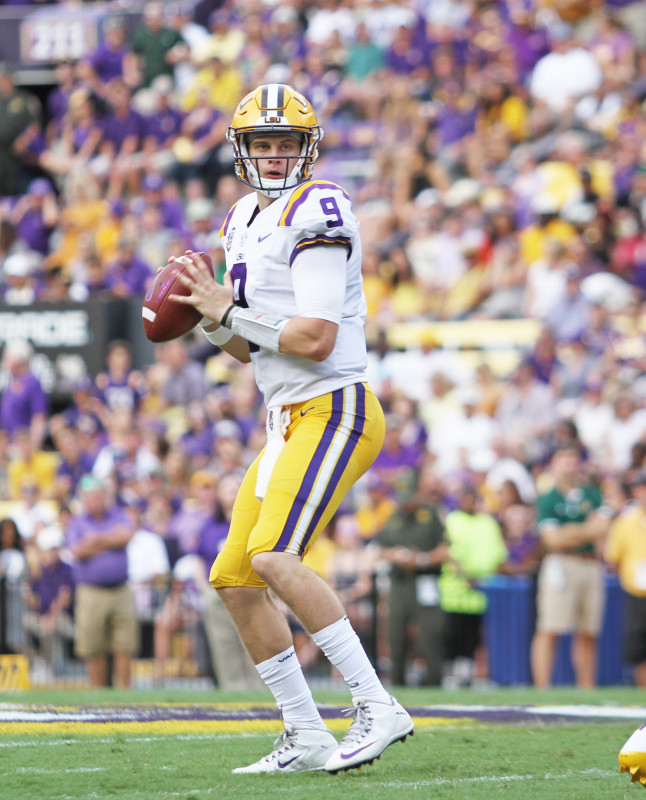 In his playoff debut, Burrow threw for 244 yards and two touchdowns in the 26–19 win against the Las Vegas Raiders in the Wild Card round, ending the Bengals' playoff win drought that had been active since the 1990 season. During the Divisional round against the top-seeded Tennessee Titans, Burrow threw for 348 yards and an interception in the 19–16 win, which was the first time in franchise history the Bengals won a playoff game on the road. The victory occurred despite Burrow being sacked nine times, tying Warren Moon in 1993 for the most times sacked in a playoff game and becoming the most-sacked quarterback to win a playoff game. In the AFC Championship Game against the Kansas City Chiefs, Burrow threw for 250 yards, two touchdowns, an interception, and helped the Bengals overcome a 21–3 deficit to win 27–24 in overtime. The 18-point comeback was tied with the Indianapolis Colts in 2006 for the largest in a conference championship. With the victory, the Bengals reached Super Bowl LVI, their first appearance since Super Bowl XXIII in 1988. In the Super Bowl, Burrow threw for 263 yards and a touchdown, but was sacked 7 times, ultimately losing to the Los Angeles Rams 23–20. Burrow set a playoff record for most times sacked in a single postseason, being sacked 19 times, surpassing the previous record set by Wade Wilson in 1987, with 14.

Joseph Lee Burrow (born December 10, 1996) is an American football quarterback for the Cincinnati Bengals of the National Football League (NFL). Following a stint with Ohio State, Burrow played college football at LSU, where he won the Heisman Trophy and the 2020 College Football Playoff National Championship as a senior. He was selected by the Bengals first overall in the 2020 NFL Draft.

Joseph Lee Burrow was born in Ames, Iowa, on December 10, 1996, the son of Robin and Jim Burrow. Jim is a former football player and coach whose career lasted over 40 years. Burrow was born in Ames when his father was on the coaching staff at Iowa State University. According to a 2019 Sports Illustrated story, "The Burrow athletic lineage dates back nearly a century." In the 1940s, his paternal grandmother set a Mississippi state high school record with an 82-point game in basketball. His paternal grandfather played basketball at Mississippi State; his uncle, John Burrow, played football at Ole Miss; and two older brothers also played football at Nebraska.

The following week against Ole Miss, Burrow threw for 489 yards and five touchdown passes, and his single-season passing yards surpassed the LSU record set by Rohan Davey in 2001. Burrow also set an LSU record for consecutive completed passes with 17 during the game. On November 30, Burrow and LSU secured an undefeated regular season with a 50–7 win over Texas A&M, in which Burrow threw for 352 yards and three touchdowns. During the game, he broke the SEC record for single-season passing yards – previously set by Kentucky's Tim Couch – and tied the conference record for single-season touchdowns (which had been set by Missouri's Drew Lock). Burrow took sole possession of the SEC single-season touchdown record the following week in the SEC Championship Game, throwing for four touchdowns in LSU's 37–10 win over Georgia that secured the Tigers' place in the College Football Playoff.

He attended the 2002 Rose Bowl at age five, as his father was an assistant coach for the University of Nebraska in Lincoln. Not long after, he began playing in youth football leagues. Unlike his father, uncle, and brothers, who all played on defense, Burrow started out as a quarterback, because his first youth team had no one else who could play the position. The Burrow family moved to North Dakota in 2003 when his father was hired as the defensive coordinator at North Dakota State University in Fargo. One day, while Jim was visiting his office, future Central Michigan head coach Dan Enos commented that the seven-year-old Joe had a future in football. The Burrows spent two years in Fargo before Jim accepted the defensive coordinator position at Ohio University in Athens.

In the 2020 National Championship Game against Clemson, Burrow threw for 463 yards with six total touchdowns, five of which were passing, which led LSU to a 42–25 victory and him being named the game's offensive MVP. He finished his 2019 season with 60 passing touchdowns, which broke the single-season FBS record previously set by Colt Brennan's 58 in 2006. (This record has since fallen to Bailey Zappe of Western Kentucky, who threw for 62 touchdowns in 2021. ) Burrow also set a FBS single-season record with 65 total touchdowns (which would be tied by Zappe in 2021). His 5,671 passing yards is now tied (with Case Keenum in 2009) for fourth-most in an FBS season. His passer rating of 202 for the season was also a record until it was surpassed by Mac Jones in 2020. Several sportswriters deemed the season to be the greatest ever by a college quarterback.

Burrow attended Athens High School (2011–14) in The Plains, Ohio, leading the school to three straight playoff appearances and the school's first seven playoff victories in school history. During his career, he passed for 11,416 yards with 157 passing touchdowns and rushed for 2,067 yards with 27 rushing touchdowns. He was awarded the state's Mr. Football Award and Gatorade Player of the Year award as a senior in 2014. He and his Bulldog teammates went 14–1 that season. He was also a standout basketball player, and was named first-team all-state at point guard his senior year. Burrow was rated as a four-star football recruit, and was the eighth-highest ranked dual-threat quarterback in the class of 2015, according to the 247Sports Composite. He committed to Ohio State to play football on May 27, 2014.

After redshirting his first year at Ohio State in 2015, Burrow spent the next two years as a backup to J. T. Barrett, during which he played in 10 games, completing 29 of 39 passes for 287 yards and two touchdowns. Realizing that Dwayne Haskins would be named starting quarterback at Ohio State, Burrow transferred to Louisiana State University (LSU) on May 20, 2018. Burrow had graduated from Ohio State in three years with a degree in consumer and family financial services, and would be immediately eligible as a graduate transfer.

In his first year at LSU, Burrow was named the starting quarterback as a redshirt junior in 2018. In an early season road trip to then-No. 7 Auburn, Burrow threw for 249 yards and a touchdown en route to a 22–21 win. He was named SEC Offensive Player of the Week following the victory. He again earned SEC Offensive Player of the Week honors following a 292-yard, three-touchdown performance against Ole Miss two weeks later. Burrow helped lead the Tigers to a 10–3 record, including a win over UCF in the Fiesta Bowl, and a No. 6 ranking in the final AP Poll. Burrow finished the season with 2,894 yards passing, 16 touchdowns, and five interceptions. He added 399 rushing yards and seven rushing touchdowns.

In December 2019, the Athens City School District school board unanimously approved a measure to rename the school's football stadium in honor of Burrow.

On December 14, 2019, Burrow was awarded the 2019 Heisman Trophy, receiving 1,846 more votes than runner-up Jalen Hurts. It was the largest victory margin in the history of the award, and Burrow received the greatest-ever share of available points. Burrow's Heisman acceptance speech referred to the rampant poverty and food insecurity affecting his hometown; shortly after his speech, the Athens County food bank was the recipient of $450,000 in donations. Other awards he won that year include the Maxwell Award, Walter Camp Award, Johnny Unitas Golden Arm Award, Davey O'Brien Award, Lombardi Award, and Manning Award.

Burrow was one of 58 players invited to the 2020 NFL Draft, where he was selected first overall by the Cincinnati Bengals. He was the third-consecutive Heisman-winning quarterback to be selected first overall, following Baker Mayfield and Kyler Murray. Burrow signed his four-year rookie contract, worth $36.1 million, on July 31, 2020.

In the wake of the Roe v. Wade being overturned in June 2022, Burrow spoke out on Instagram in favor of abortion rights in the United States.