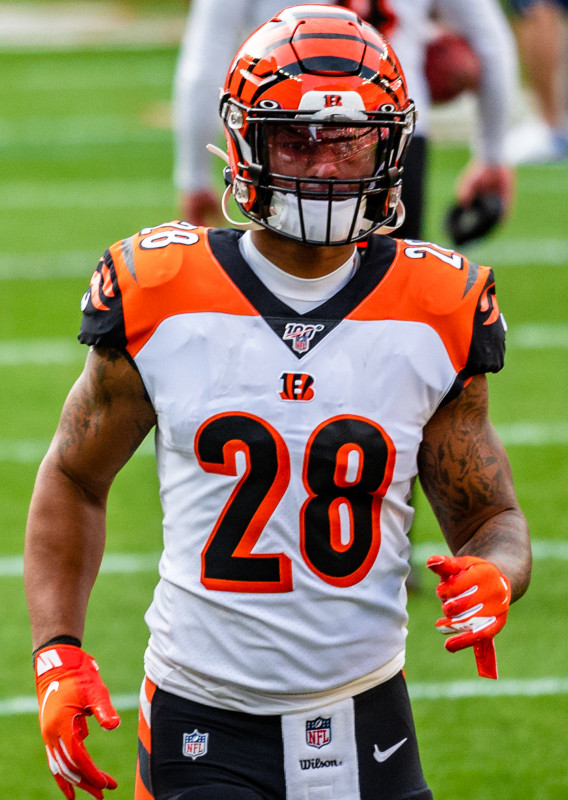 Joseph Tyler Mixon (born July 24, 1996) is an American football running back for the Cincinnati Bengals of the National Football League (NFL). He played college football at Oklahoma, where he was a first-team All-Big 12, and was selected by the Bengals in the second round of the 2017 NFL Draft. Mixon received Pro Bowl honors in 2021 as a member of the team that reached Super Bowl LVI.

During Week 1 against the Minnesota Vikings, Mixon finished with 127 rushing yards and a touchdown as the Bengals won 27–24 in overtime. In Week 11, against the Las Vegas Raiders, he had 121 rushing yards and two touchdowns. In Week 12, Mixon had 165 rushing yards and two touchdowns in a 41–10 win over the Pittsburgh Steelers, earning AFC Offensive Player of the Week. In December, Mixon was selected to his first Pro Bowl, making him the first Bengals running back to make the Pro Bowl since Rudi Johnson in 2004. On January 5, 2022, Mixon was revealed to have tested positive for COVID-19, and thus could not play in the season finale. Overall, Mixon finished the 2021 season with a career high 1,205 rushing yards and 13 rushing touchdowns to go along with 42 receptions for 314 receiving yards and 3 receiving touchdowns. Mixon's 13 rushing touchdowns were the most by a Bengals player since Ickey Woods had 15 in the 1988 season.

Mixon was ranked as a five-star recruit and the top-ranked running back in the nation by the Rivals.com recruiting network. In January 2014, he committed to the University of Oklahoma to play college football. He had 47 offers, and ultimately chose Oklahoma over Alabama, California, Wisconsin, and UCLA.

Mixon entered an Alford plea to a misdemeanor assault charge in October 2014 for punching Amelia Molitor, breaking bones in her face and resulting in hospitalization and surgery. The incident happened on July 25, 2014, a day after Mixon turned 18, in Norman, Oklahoma.

Mixon attended and played college football for the University of Oklahoma from 2014–2016. He was suspended from the Oklahoma football team for the 2014 season after a misdemeanor assault charge in October 2014.

In 2015, Mixon earned playing time his redshirt freshman year, playing in all 12 games with three starts. In his first career game, Mixon had a 76-yard touchdown reception, the longest catch ever by a Sooner freshman running back. In addition, he ran for 27 yards on five carries against Akron. On October 24, against Texas Tech, he had 154 rushing yards and two rushing touchdowns. In the annual rivalry game against Oklahoma State, he had 136 rushing yards and two rushing touchdowns. Oklahoma qualified for the College Football Playoff in the 2015 season. In the semifinals against Clemson in the Orange Bowl, he was limited to four rushing yards and 11 receiving yards in the loss. During the 2015 regular season, he ran for 749 yards on 110 carries, averaging 6.8 yards. He rushed for seven touchdowns and set his career long carry at 66 yards. He also recorded 25 receptions for 345 yards, averaging 13.8 yards per reception, and four touchdowns.

Oklahoma coach Bob Stoops suspended Mixon for one game in 2016 after an incident involving him and a parking attendant. After receiving a parking citation, Mixon confronted the attendant, tore the citation in half, and threw the pieces. According to the incident report, he then "inched at the officer" with his vehicle "to intimidate the officer".

Mixon received a one-year deferred sentence and was ordered to undergo counseling along with 100 hours of community service. Molitor filed suit in federal court against Mixon on July 22, 2016, accusing Mixon of negligence, wilful and wanton misconduct, and intentional infliction of emotional distress. A settlement in the case was reached, and Mixon apologized to Molitor on April 21, 2017.

Coming out of college, some analysts and scouts graded Mixon as a first-round talent but projected him to be selected in the third or fourth round due to his prior history. He was ranked the fifth-best running back by NFLDraftScout.com, the fourth-best by Sports Illustrated, and the third-best back by Pro Football Focus. Although he was a talented prospect, the NFL declined to invite him to the NFL Scouting Combine. ESPN reported that on the weekend of the combine the Cincinnati Bengals met with Mixon in order for them to get a chance to talk with him extensively about his character. On March 8, 2017, Mixon performed all of the combine tests and completed the positional workouts at Oklahoma's Pro Day.

Mixon was drafted by the Cincinnati Bengals in the second round (48th overall) of the 2017 NFL Draft. He was the fourth running back to be selected in that year's draft. He was viewed as a first-round talent by some scouts, but several teams removed him from their draft board entirely due to character concerns after a prior assault on Amelia Molitor, a female student at Oklahoma. New England Patriots owner Robert Kraft said, "While I believe in second chances and giving players an opportunity for redemption, I also believe that playing in the NFL is a privilege, not a right. For me, personally, I believe that privilege is lost for men who have a history of abusing women." After Mixon was drafted, ESPN writer Dan Graziano wrote that, "No 2017 draft pick enters the league under more intense scrutiny or controversy." The editorial board of Cincinnati TV station WCPO criticized the draft pick and called for a boycott of the Bengals, writing, "Instead of buying a Bengals ticket this year, take the $50 or more you would have spent on that ticket and donate the money to a nonprofit that works to prevent violence against women." On June 2, 2017, the Bengals signed Mixon to a four-year, $5.45 million contract with $2.81 million guaranteed and a signing bonus of $2.10 million.

On September 1, 2020, Mixon signed a four-year, $48 million contract extension with the Bengals through the 2024 season. In Week 4, against the Jacksonville Jaguars, Mixon had 25 carries for 151 rushing yards and two rushing touchdowns to go along with six receptions for 30 receiving yards and one receiving touchdown during the 33–25 win. Mixon was named the AFC Offensive Player of the Week for his performance in Week 4. In Week 6, he suffered a foot injury and missed the next three games before being placed on injured reserve on November 21, 2020. In the 2020 season, Mixon finished with 428 rushing yards and three rushing touchdowns to go along with 21 receptions for 138 receiving yards and a receiving touchdown in six games.