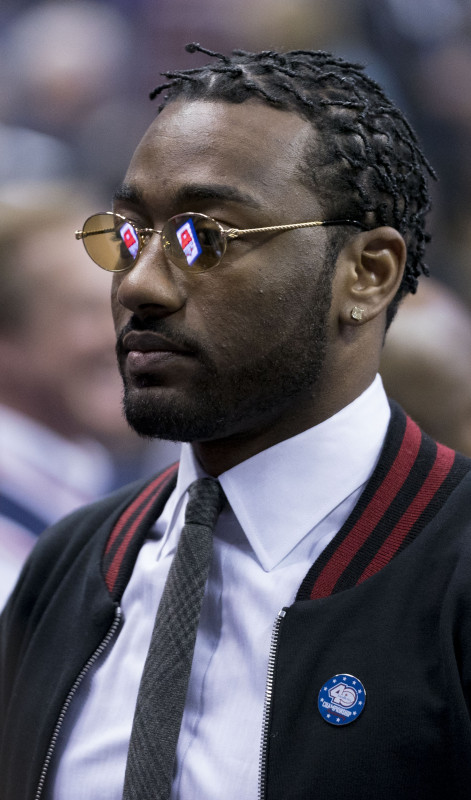 Johnathan Hildred Wall Jr. (born September 6, 1990) is an American professional basketball player for the Los Angeles Clippers of the National Basketball Association (NBA). A Raleigh, North Carolina native, Wall was chosen with the first overall pick of the 2010 NBA draft by the Washington Wizards after playing one year of college basketball for the Kentucky Wildcats. Wall, who plays the point guard position, was a five-time NBA All-Star from 2014 to 2018 and was named to the All-NBA Team in 2017. However, he experienced multiple injuries in 2019 and missed more than two years of basketball before being traded to the Houston Rockets in December 2020.

Wall was born on September 6, 1990 to Frances Pulley and John Carroll Wall Sr. When he was a year old, his father, who had previously served time in prison for second-degree murder, was convicted of armed robbery. Wall Sr. was released from prison on August 24, 1999, but died of liver cancer a month later at age 52. Wall's older half-brother, John Carroll Wall Jr., promised at their father's funeral to take care of the family, but was incarcerated the next year and released in 2018.

In 2008, Wall played in the Elite 24 Hoops Classic, at which he scored 10 points and won co-MVP honors alongside Dominic Cheek, Maalik Wayns, and Lance Stephenson.

As a fifth-year senior in 2009, Wall averaged 19.7 points, 9 assists, and over 8 rebounds for Word of God Christian Academy and was ranked one of the best high school basketball players in the class of that year. He led the Holy Rams basketball team all the way to the North Carolina Class 1A state championship; they were ultimately defeated by United Faith Christian Academy 56–53, but not before that school's Ian Miller hit a 40 foot game-clinching jump shot at the buzzer. Wall scored 11 points in the contest. He was selected to participate in the 2009 Nike Hoop Summit in Portland, Oregon; he scored 13 points to go along with 11 assists and 5 steals at the high-profile event. He was also selected to play in the Jordan Brand Classic that year at Madison Square Garden, where he notched 6 assists.

Because Wall was a fifth-year high school senior in 2009 and would turn 19 by the end of the year, some sources argued that he would be eligible for the 2009 NBA draft. League rules stated that American players must turn 19 during the year of the draft and be a year removed from their regular high school class. NBA spokesman Tim Frank told sportswriter Chad Ford that the league was not sure whether Wall met the second criterion, and that league officials would need to "do [their] due diligence to determine his eligibility". Wall announced in April 2009 that he was not entering the 2009 NBA draft, where he was expected to be the first player taken, and would attend Kentucky instead.

Originally recruited by the University of Kentucky, Duke University, Georgia Tech, and University of Kansas, Wall announced his commitment to attend the University of Kentucky on May 19, 2009. He was suspended by the NCAA from Kentucky's first exhibition game and first regular season game for travel benefits he received from his AAU coach Brian Clifton, a certified agent at the time. In his first action as a Wildcat, in an exhibition game against Clarion University of Pennsylvania, the freshman point guard led his team to victory with 27 points and 9 assists in 28 minutes of playing time. In his collegiate debut at Kentucky versus Miami University, Wall made the game-winning shot with .5 seconds left on the clock to help then #5 ranked Kentucky win. He finished with 19 points, 2 rebounds, 5 assists, and 3 steals.

On December 29, 2009, against Hartford, Wall set the Kentucky single-game assist record with 16, 11 in the first half, with only 1 turnover. The mark was previously held by Travis Ford, at 15, and was broken on Ford's 40th birthday. Wall scored 9 points, failing to break double digits for the first time in his college career.

Wall signed a five-year endorsement deal worth $25 million with Reebok in 2010, then moved to Reebok's parent company Adidas in 2013. He signed another five-year deal with Adidas in 2018. In May 2017, Wall signed on as a brand ambassador for New Era caps.

On April 7, 2010, Wall announced that he would forgo his final three seasons of collegiate eligibility and enter the 2010 NBA draft, where he was expected to be the first overall selection for the Washington Wizards. On May 3, Wall signed with agent Dan Fegan.

On June 23, 2010, Reebok revealed Wall as its latest signing, casting him as the face of its latest basketball shoe, the ZigTech Slash. On June 24, 2010, Wall was drafted as the first overall pick by the Wizards. On June 25, 2010, Mayor Adrian Fenty of Washington, D.C., declared June 25 John Wall Day on a plaque handed to Wall during his Wizards presser.

In 2013, after signing a five-year contract with the Wizards, Wall purchased a home in Potomac for $4.9 million. The two-acre property, which has eight bedrooms, six garages, and 17,980 square feet, was selected to accommodate Wall's mother, siblings, and guests.

On July 31, 2013, Wall, labeled by the Wizards as a designated player, signed a five-year contract extension worth approximately $80 million.

On January 22, 2014, Wall recorded his second career triple-double with 28 points, 11 rebounds and 10 assists in a 111-113 overtime loss to the Boston Celtics. On January 30, 2014, Wall was selected as an East reserve for the 2014 NBA All-Star Game, making this his first All-Star team. During All-Star weekend, he became the first in Washington franchise history to win the Slam Dunk Contest after fans voted him the Dunker of the Night. His final dunk was a reverse slam assisted by the Wizards' mascot. On February 27, 2014, Wall had 31 points and 9 assists as the Wizards won a triple overtime game against the Raptors 134-129. It was the franchise's first triple-overtime game since 1975. On March 1, 2014, Wall recorded a then career-high 16 assists, along with 17 points, 3 rebounds, and 2 steals, in a 122-103 victory over the Philadelphia 76ers.

In July 2014, Wall was selected as a member of the United States camp roster to compete for the 2014 FIBA Basketball World Cup team. Due to off-season knee surgery, Wall withdrew his name from consideration for USA Basketball's 2016 Rio Olympics team.

On December 8, 2014, Wall recorded 26 points, 7 rebounds, 3 steals and a then career-high 17 assists in a 133–132 double-overtime win over the Boston Celtics. Following the game, Wall dedicated the win to his close friend, six-year-old Damiyah Telemaque-Nelson, who had died of cancer earlier that day. When asked by a reporter "She meant a lot to you, didn't she?", he broke down and started to cry. He later gave her family all of his gear that he wore that night, including his shoes which had Damiyah's name on them. He went on to tie his career-high of 17 assists, along with 21 points, on December 16 in a 109–95 win over the Minnesota Timberwolves. On January 22, 2015, he was named an Eastern Conference starter for the 2015 NBA All-Star Game, earning his first starting gig after garnering 886,368 votes.

On March 14, 2015, Wall tied his season-high of 31 points while adding 12 assists in a 113–97 win over the Sacramento Kings. On April 3, he recorded 6 points and a then career-high 18 assists in a 101–87 win over the New York Knicks. On April 21, he recorded a Wizards playoff franchise record for assists with 17 as the Wizards defeated the Toronto Raptors 117–106 to take a 2–0 lead in their first-round playoff series. The Wizards went on to win the series with a 4–0 sweep, but lost their second-round series to the Atlanta Hawks in six games.

In 2016, Wall received the Stewart B. McKinney Award for his work to end homelessness after he donated $400,000 to Bright Beginnings.

Following off-season surgery on both knees, Wall was rested in the second of back-to-back night games early on in the 2016–17 season, as a way of limiting his minutes. With eight assists against the Houston Rockets on November 7, Wall broke Wes Unseld's franchise record (3,822) for career assists. On November 21, he recorded 18 points, a then season-high 15 assists and three blocked shots in a 106–101 win over the Phoenix Suns. By late November, his minutes restriction was lifted. On December 6, he scored a career-high 52 points in a 124–116 loss to the Orlando Magic. He made 18-of-31 from the field and added eight assists. With seven steals against the Charlotte Hornets on December 14, Wall became Washington's franchise leader in steals, surpassing Greg Ballard (762). On December 26, he had 18 points and a then season-high 16 assists in a 107–102 win over the Milwaukee Bucks. On January 2, 2017, he was named Eastern Conference Player of the Week for games played Monday, December 26 through Sunday, January 1. He led the Wizards to a 3–0 week while averaging 24.3 points (eighth in the East), an NBA-leading 13.0 assists, 5.3 rebounds and 2.67 steals (second in the East). A day later, he was named Eastern Conference Player of the Month for December.

On July 26, 2017, Wall signed a four-year, $170 million contract extension with the Wizards. Wall missed nine games in late November and early December with a knee injury; the Wizards went 4–5 in that time. On January 6, he recorded 16 points and a season-high 16 assists against the Milwaukee Bucks. On January 12, he scored 30 points in a 125–119 win over the Orlando Magic, becoming the youngest player (27 years, 128 days) in franchise history to reach 10,000 points for his career. The next day, he scored 17 of his 23 points in the second half and overtime, and tied a season high with 16 assists in the Wizards' 119–113 victory over the Brooklyn Nets. On January 30, 2018, he was sidelined for the next six-to-eight weeks due to his troublesome left knee requiring surgery. He missed two months with the injury, returning to action on March 31 against the Charlotte Hornets and recording 15 points and 14 assists in a 107–93 win. On April 10, he recorded 29 points and 12 assists in a 113–101 win over the Boston Celtics, thus surpassing 5,000 career assists. In Game 3 of the Wizards' first-round playoff series against the Toronto Raptors, Wall recorded 28 points and 14 assists, as the Wizards cut the series deficit to 2–1 with a 122–103 win. In Game 4, Wall recorded 27 points and 14 assists in a 106–98 win, helping the Wizards tie the series at 2–2. The Wizards went on to lose the series in six games despite Wall's 23 points and eight assists in a 102–92 loss in Game 6.

On September 22, 2017, Wall was inducted into the University of Kentucky Athletics Hall of Fame.

Wall said in 2018 that he was pursuing a bachelor's degree in business administration.

On November 26, 2018, in a 135–131 overtime win over the Houston Rockets, Wall passed Wes Unseld for third place on the franchise career scoring list. On December 16, he recorded 40 points and 14 assists in a 128–110 win over the Los Angeles Lakers. On December 29, he was ruled out for the rest of the season with a left heel injury. After initially undergoing season-ending surgery on his left heel in January 2019, Wall developed an infection in the incision from that surgery, then suffered a ruptured left Achilles tendon when he slipped and fell in his home. He was subsequently ruled out for 12 months.

On March 11, 2020, the 2019–20 NBA season was suspended as a result of the COVID-19 pandemic. Despite the season resuming in July at the NBA Bubble in Orlando, Florida, which exceeded Wall's 12-month timetable of recovery, he did not travel with the Wizards, officially ending his season.

Wall apologized via Twitter in September 2020 after a video surfaced on social media of him using Bloods gang signs and displaying a red bandana to the camera.

On December 2, 2020, Wall, along with a 2023 lottery-protected first-round pick, were traded to the Houston Rockets for Russell Westbrook. On March 22, 2021, Wall logged his eighth career triple-double with 19 points, 11 rebounds and 10 assists in a 117–99 win over the Toronto Raptors, ending the team's 20-game losing streak. It was his first triple-double since 2016. On April 26, Wall was ruled out for the remainder of the season after suffering a grade 2 hamstring strain.