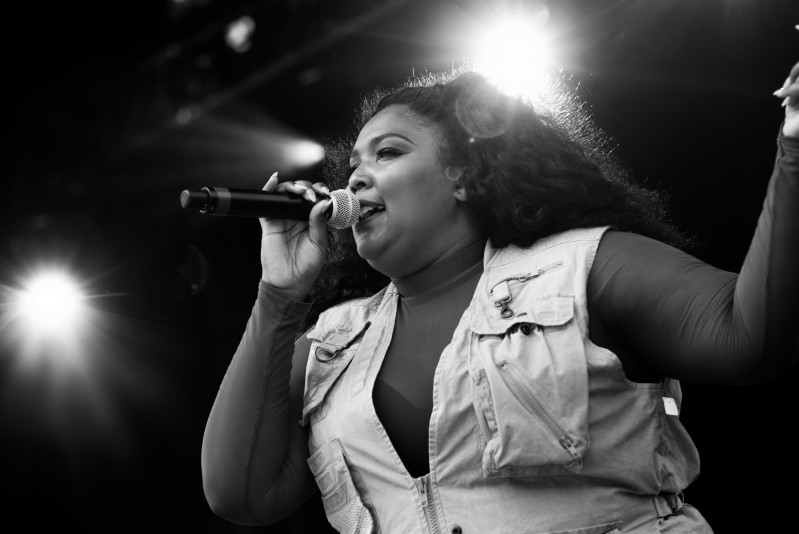 Melissa Viviane Jefferson (born April 27, 1988), known professionally as Lizzo, is an American singer, rapper, songwriter and flutist. Born in Detroit, Michigan, she later moved to Houston, Texas, where she began performing before moving to Minneapolis, where she began her recording career in hip hop music. Prior to signing with Nice Life and Atlantic Records, Lizzo released two studio albums—Lizzobangers (2013) and Big Grrrl Small World (2015). Lizzo's first major-label EP, Coconut Oil, was released in 2016.

Melissa Viviane Jefferson was born in Detroit, Michigan. At the age of ten, her family relocated to Houston, Texas. She was classically trained as a flutist by renowned music teacher Claudia Momen from the age of 10 until she graduated high school. Lizzo started rapping as a teenager in a southwest part of Houston known as Alief. At the age of 14, she formed a musical group called Cornrow Clique with her friends. At this time she acquired the nickname "Lizzo", a variant of "Lissa" inspired by Jay-Z's "Izzo (H.O.V.A.)". After graduating from Alief Elsik High School in 2006, she studied classical music focusing on flute at the University of Houston. At the age of 21, after the death of her father, she lived out of her car for a year as she tried to break into the music industry. She moved to Minneapolis, Minnesota in 2011.

While living in Minneapolis, Lizzo performed with groups including the electro soul-pop duo, Lizzo & the Larva Ink. During this time she helped form a three-piece all-female rap/R&B group: the Chalice. In 2012, the Chalice released their first album, We Are the Chalice, which was locally successful.

Lizzo toured the US and UK in the fall of 2013 opening for Har Mar Superstar, and additionally sang with his band. In October 2013, Lizzo won City Pages' "Picked to Click" award for best new Twin Cities artist. The following month Time named her one of 14 music artists to watch in 2014. The album was subsequently re-released through Virgin Records. Later that year, Lizzo shared the stage with St. Paul and the Broken Bones, performing "A Change Is Gonna Come" together.

Following the release of her first album, Lizzo immediately began working on new music. In 2014, she participated in StyleLikeU's What's Underneath project, where she removed her clothes as she talked about her relationships with her body. Inspired by the experience, she wrote "My Skin", which she described as "the thesis statement" of her forthcoming second album. In an interview with Vice, regarding body image, she said:

In September 2014, Lizzo was featured alongside her Chalice bandmates Sophia Eris and Claire de Lune on the song "BoyTrouble" on Prince's and 3rdEyeGirl's album Plectrumelectrum. On working with Prince, Lizzo says the experience was "surreal... almost like a fairytale" and that it was "something I will never actually get over." On October 7, 2014, Lizzo appeared as the musical guest on the Late Show with David Letterman.

Lizzo's second studio album, Big Grrrl Small World, was released on December 11, 2015. Spin placed the album at number 17 on the "50 Best Hip-Hop Albums of 2015" list. Hilary Saunders of Paste praised Lizzo's "ability to rap and sing with equal tenacity." Her collaboration with Your Smith (then Caroline Smith), "Let 'Em Say", was featured in the season three premiere of Broad City.

Lizzo was one of the hosts of MTV's short-lived 2016 live music performance series Wonderland. After signing with Atlantic Records that same year, Lizzo released her first major-label extended play, Coconut Oil, on October 7, 2016. "Good as Hell" was released as the lead single from the Coconut Oil on March 8, 2016 as part of the soundtrack for the 2016 film Barbershop: The Next Cut. Lizzo co-wrote each song on the album, while enlisting Ricky Reed, Christian Rich, Dubbel Dutch, and Jesse Shatkin for the album's production. The result was a departure from Lizzo's previous alternative hip hop releases. Lyrically, the extended play explores themes of body positivity, self-love, and the journey to those ideals.

Coconut Oil received positive reviews from music critics. Syra Aburto, writing for Nylon, wrote that "like the product it's named after, [Lizzo's] latest project, Coconut Oil, is essential for healthy living." Rolling Stone placed it at No. 14 on the list of the "20 Best Pop Albums of 2016". Commercially, Coconut Oil peaked at number 44 on US Top R&B/Hip-Hop Albums, making it Lizzo's first release to chart. To promote the extended play, Lizzo embarked on the Good as Hell Tour in 2017. In May she headlined The Infatuation's annual food festival, EEEEEATSCON and also appeared as a guest judge on the tenth season of RuPaul's Drag Race. In early 2018, Lizzo toured both with Haim and Florence and the Machine.

Lizzo's music primarily incorporates hip hop, and is also infused with genres such as soul, R&B and funk-pop. Lizzo's influences include Missy Elliott, Lauryn Hill, Chris Brown, and Beyoncé. Primarily a rapper, Lizzo incorporated singing into her debut record. She stated in an interview in 2018, "I was always afraid of being a singer, but then when I heard Lauryn Hill, I was like, maybe I can do both," further adding that her debut album was inspired by The Miseducation of Lauryn Hill, and Hill's ability of "rapping, singing, being political." She has cited Diana Ross as a fashion reference.

After struggling with body issues at an early age, Lizzo became an advocate for body positivity and self-love as she attracted more mainstream attention, while making diversity the focus of her music, in regards to one's body, sexuality, race, and more. Her group of back-up dancers, the Big Grrrls, consists of all plus-size dancers. Highlighting body inclusivity and celebrating individuality, Lizzo appeared in ModCloth's "Say It Louder" campaign, which launched on June 11, 2018. In the same month, she sported the first plus-size outfit made for FIT's Future of Fashion runway show by Grace Insogna for her performance at NYC Pride's Pride Island event. Lizzo was profiled in the June 2018 Teen Vogue Music Issue.

When asked about her sexuality in a June 2018 interview, Lizzo stated, "I personally don't ascribe to just one thing.... That's why the colors for LGBTQ+ are a rainbow! Because there's a spectrum and right now we try to keep it black and white. That's just not working for me." She has a strong LGBTQ+ following and has dubbed her fans "Lizzbians". In June 2019, to mark the 50th anniversary of the Stonewall riots, an event widely considered a watershed moment in the modern LGBTQ rights movement, Queerty named her one of the Pride50 "trailblazing individuals who actively ensure society remains moving towards equality, acceptance and dignity for all queer people".

Aside from singing and rapping, Lizzo has also worked as an actor: she served as a voice performer in the animated film UglyDolls (2019) and appeared in the crime comedy-drama film Hustlers (2019). In 2019, Time named Lizzo as "Entertainer of the Year" for her meteoric rise and contribution to music. In addition to her three Grammy Awards, she has also won a Billboard Music Award, a BET Award, and two Soul Train Music Awards.

In 2019, in addition to her musical projects, Lizzo ventured into acting, with a voice performance in the animated film UglyDolls, and a supporting part in the crime comedy-drama film Hustlers.

In an article for The Guardian in 2019, writer Leonie Cooper credited Lizzo for "the woodwind renaissance" as "the flute’s brightest champion" on the mainstream.

"Juice", the lead single from her third studio album, was released on January 4, 2019, by Atlantic Records. The next month, she announced the title of the album, Cuz I Love You, which was eventually released on April 19, 2019. After the release of her album, she performed at the Coachella Music Festival for the first time.

On July 23, 2019, Lizzo was nominated for Push Artist of the Year and Best New Artist at the 2019 MTV Video Music Awards. She performed a medley of "Truth Hurts" and "Good as Hell" at the 2019 MTV Video Music Awards; her performance received critical praise. Around this time, her 2016 single "Good as Hell" also climbed the charts around the world, reaching the top three of the Billboard Hot 100 and the top ten of the UK Singles Chart. The song also reached the top ten in Australia and Belgium.

"Truth Hurts" has since become Lizzo's first number-one hit on the Billboard Hot 100. Lizzo became the third female rapper to top the Hot 100 without a featured artist. She also became the first Black solo female R&B singer to claim the top spot on the Hot 100 since Rihanna's 2012 hit "Diamonds". A week later, on September 9, 2019, Cuz I Love You became certified gold by the RIAA with over 500,000 equivalent units sold. "Truth Hurts" spent seven weeks atop the Hot 100, tying for the most weeks at number one for a rap song by a female artist. The music video for the song, in which Lizzo "marries herself", has amassed more than 220 million views on YouTube. In an interview, she revealed that the initial lack of success for “Truth Hurts”—what she had thought to be her best song yet at the time—caused her to seriously consider quitting the music industry altogether.

Throughout her career, Lizzo has been subject to body shaming. She is considered an image for body positivity and self-confidence. She partially credits social media, and the Internet in general, for changing the narrative around size and giving visibility to overweight women. In December 2019, Lizzo sparked controversy at a Los Angeles Lakers game, where on camera she danced and twerked to her song "Juice" while wearing a dress that revealed her thong. In an interview with CBS This Morning she said, "Anyone who knows me knows that this is how I've always been. This is how I've always liked to dress." On January 5, 2020, Lizzo stopped using Twitter; she cited "too many trolls" as the reason for her departure, and stated she would "be back when I feel like it". Her Twitter account has since been updated by her management, while she remains active on her Instagram. Lizzo often discusses her mental health and its impact on her career.

Lizzo made her Saturday Night Live debut as musical guest on the December 21, 2019 episode, which Eddie Murphy hosted. The episode was the final episode of both the year and the decade. In January 2020, Lizzo headlined FOMO Festival, performing in four Australian cities and Auckland, New Zealand. She also performed a sold-out show at the Sydney Opera House, where she had previously performed as a young flute player. She opened the 62nd Annual Grammy Awards with a medley of "Cuz I Love You" and "Truth Hurts", and won three awards at the ceremony. She received eleven nominations at the 2020 Billboard Music Award, winning one for Top Song Sales Artist. At the 2020 BET Awards, she became the first act to be nominated in both the R&B/pop and hip-hop artist categories in the same year.

Lizzo grew up attending the Church of God in Christ. As of June 2020, Lizzo is a vegan.

In August 2020, Lizzo signed a production deal with Amazon Studios to develop new projects with them. Her first project was an unscripted reality competition series.