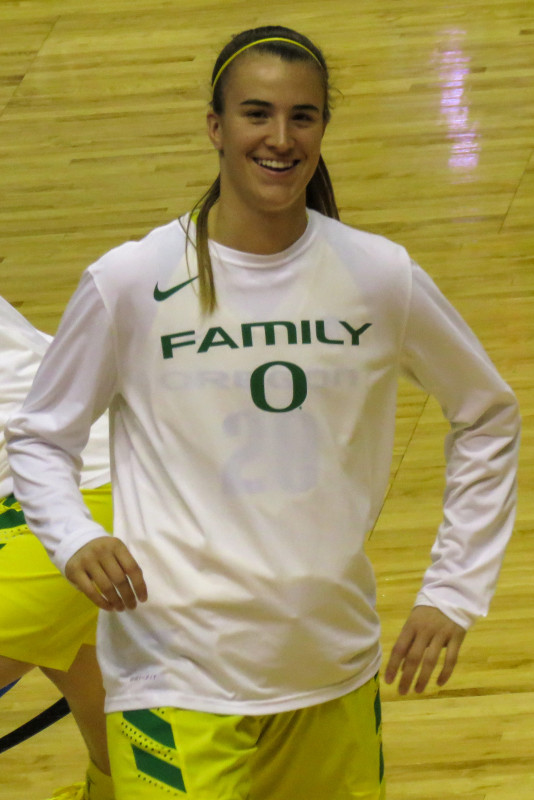 Sabrina Elaine Ionescu (born December 6, 1997) is an American professional women's basketball player for the New York Liberty of the Women's National Basketball Association (WNBA). She played college basketball for the Oregon Ducks. She is the NCAA all-time leader in career triple-doubles, the Pac-12 Conference all-time leader in assists, and the only NCAA Division I basketball player to record 2,000 points, 1,000 assists, and 1,000 rebounds in a career.

Ionescu was the No. 1 ranked point guard and No. 4 overall player in the recruiting class of 2016. According to Ava Wallace of The Washington Post, Ionescu chose Oregon "because she wanted to be the all-American at Oregon, not just an all-American somewhere else." At the time, she was the highest-ranked recruit ever to commit to Oregon basketball. However, she had difficulty making a college choice, not signing a National Letter of Intent with any school during either the early signing period in November 2015 or the late period in April 2016. Ionescu finally committed to Oregon just before the school's 2016 summer term began, driving with her father for 8 hours from their Bay Area home to Eugene, making an unannounced visit to Matthew Knight Arena and telling head coach Kelly Graves that she would join the team.

On February 26, 2018, Ionescu was named espnW's college basketball player of the week. Ionescu led the Ducks to their third regular-season league crown all-time and first-ever No. 1 seed in the Pac-12 Women’s Basketball Tournament. She led the Pac-12 in scoring (19.2) and assists, dishing out 7.8 assists per game which was fifth-most in the country. She had 16 double-doubles this season and 14 20-point games. She has recorded 10-assist games 13 times this season, handing out a league season-high 14 twice. Following her second season, she was named the Pac-12 Conference Women's Basketball Player of the Year, and was also named a first team All-American by ESPN. Ionescu's Oregon Ducks also won the Pac-12 championship for the first time since 2000. She was named the winner of the Nancy Lieberman Award as the top Division I women's point guard after the season, and was also a finalist for the Naismith Award. Ionescu became NCAA women's all-time leader in triple-doubles, trailing only former BYU men's player Kyle Collinsworth (with 12) among all NCAA players.

In late April 2018, Ionescu and Oregon teammates Erin Boley, Otiona Gildon, and Ruthy Hebard entered the USA Basketball women's national 3x3 championship tournament at the United States Olympic Training Center in Colorado Springs, Colorado. Ionescu had never before played under FIBA 3x3 rules, admitting after the tournament, "I had to ask the rules before the games started." She adjusted quickly to the unfamiliar format, leading her team to the championship while going unbeaten and also being named tournament MVP. Ionescu and her Oregon teammates would be named as the US team for the 2018 3x3 World Cup to be held in June in the Philippines. At the World Cup, they were the youngest team in the field, but swept their pool, defeating Cup holders Russia along the way.

On November 6, 2018, Ionescu recorded her 11th triple-double in a victory against Alaska-Fairbanks. Twelve days later, she would tie the NCAA triple-double record, with her 12th triple-double in a win against Buffalo. On December 20, 2018, Ionescu recorded her 13th triple-double in a game against Air Force and broke the NCAA triple-double record for both men and women basketball. She was later named ESPNW Player of the Week. Since that game on December 20, 2018, Ionescu has added five more triple-doubles for a season total of eight, and has broken the Oregon women's basketball assist record (formerly 608 assists) in a Pac-12 conference game against USC. In the 2019 NCAA Tournament, Ionescu leads the Ducks to their first Final Four appearance after their 88–84 victory over Mississippi State. Ionescu finished the game with 31 points, eight assists, seven rebounds and a steal. In the NCAA Tournament Final Four, the Ducks lost to the eventual national champion Baylor 72–67. After the conclusion of the season, Ionescu was named the 2019 John R. Wooden Award winner along with Duke's Zion Williamson. The award is given annually to the most outstanding male and female collegiate basketball player that year.

According to Ducks coach Kelly Graves, in 2019 Ionescu had "a chance to be a Marcus Mariota, that level of player and an esteemed Oregon Duck when it’s all said and done." He noted that attendance at Oregon women's games had dramatically increased during Ionescu's career at the school. In the season before she arrived, the average announced home attendance for the Ducks was 1,501. Her sophomore season saw an average attendance of over 4,200; it went up to over 7,100 in her junior season and over 10,000 in her senior season. Ionescu was also a significant draw when Oregon went on the road; for example, when the Ducks visited Washington during her junior season, the crowd for that game was 3,000 more than the Huskies drew two nights earlier against Oregon State.

Ionescu was born in Walnut Creek, California to Romanian-American parents. Her father, Dan Ionescu, fled Communist Romania around the time of the 1989 revolution, seeking political asylum in the United States. He hoped that his then-wife, Liliana Blaj, and their son Andrei could join them in a few months, but they were unable to move to the US until 1995. By that time, Dan owned a limousine service in Northern California, where he had chosen to settle because he had several extended family members in that area. Sabrina was around three years old when she first picked up a basketball. She has a twin brother Edward ("Eddy"), who was born 18 minutes after her. Eddy played basketball at the City College of San Francisco before transferring to Oregon; he was solely a student in the 2018–19 school year before walking on to the Ducks men's basketball team in 2019–20.

Yes, Sabrina Elaine Ionescu, who only earned her diploma in 2019, is considered by UO fans to be one of the four greatest Ducks ever, standing alongside such greats as Marcus Mariota, Steve Prefontaine, and the alumnus who co-founded Nike and made the Phil and Penny Knight Campus for Accelerating Scientific Impact possible.

Because Ionescu turned 22 in December 2019 she was eligible to declare for the 2019 WNBA draft. A January 2019 mock draft by ESPN, incorporating input from WNBA personnel and ESPN women's basketball analysts, concluded that Ionescu was a possible top pick should she declare. However, Ionescu announced in an open letter published in The Players' Tribune on April 6, 2019, the day after Oregon's loss to Baylor in the Final Four and four days before the draft, that she would return to Oregon for her senior season.

In the second game of her senior season on November 13, 2019, Ionescu surpassed the 2,000 points, 800 assists mark for her college career with a 109–52 win over Utah State. She fell short of another triple-double with 16 points, 12 assists and 9 rebounds in the game but recorded her 2,012 career points and 810 career assists. In a win over then #3 Stanford (87–55), Ionescu scored a career high 37 points along with 11 rebounds and 7 assists, and broke Alison Lang's Oregon all-time career scoring record of 2,252 points in the third quarter. In the rivalry game against Oregon State on January 24, 2020, Ionescu had 24 points, 9 assists and 4 rebounds and broke Oregon State and NBA star Gary Payton's Pac-12 all-time record of 938 assists. Payton personally congratulated Ionescu on the achievement. On February 14, 2020, Ionescu recorded her 1,000th career assist in a game against #7 UCLA and joined Courtney Vandersloot as the only players in NCAA men's and women's basketball history with 2,000 plus points and 1,000 plus assists. Ten days later in the Ducks' 74–66 win at #4 Stanford, she became the first NCAA player ever with 2,000 points, 1,000 assists, and 1,000 rebounds in a career. Ionescu also recorded her eighth triple-double of the season, tying her own NCAA single-season record from last season. Earlier that day, she had been a featured speaker at the memorial service for Kobe Bryant, who had become a close personal friend within the previous two years, flying from Los Angeles to the Bay Area immediately after her speech.

On April 14, 2020, Ionescu was named the winner of the Honda Sports Award as the best collegiate female basketball player in the nation.

On April 17, 2020, the New York Liberty selected Ionescu with the first overall pick in the 2020 WNBA Draft. She played her first game with the Liberty on July 25. In her second WNBA game on July 29 against the Dallas Wings, she recorded 33 points, 7 assists, and 7 rebounds in 34 minutes of play.