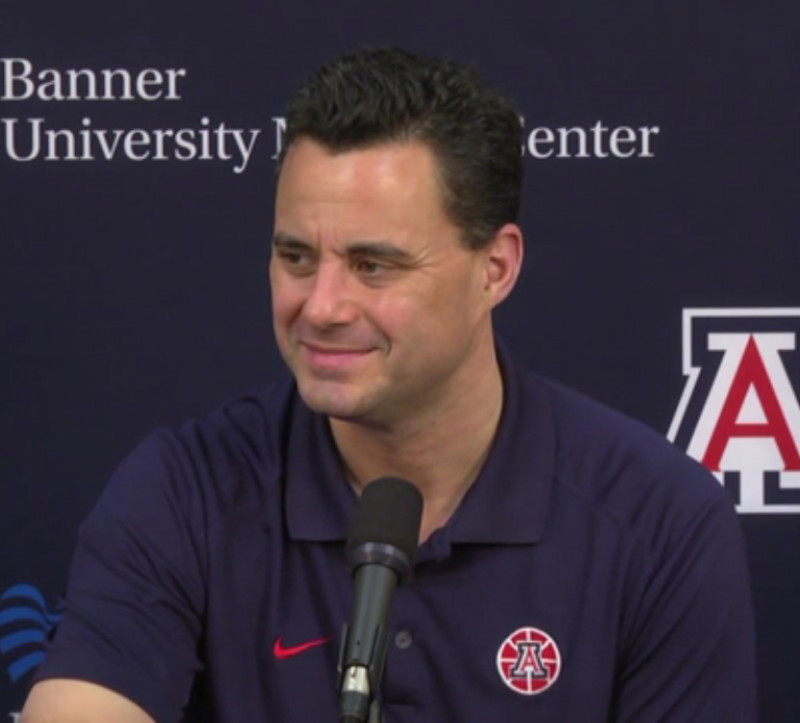 Sean Edward Miller (born November 17, 1968) is a American men's college basketball coach. He was most recently the head coach of the Arizona Wildcats. Miller is a three-time gold medalist as a member of USA Basketball: once as a player, once as an assistant coach, and once as head coach. Miller has won five league Coach of the Year Awards: once in the A10, three in the Pac-12, and once as USA Basketball Coach of the Year.

After graduating from Pitt with a degree in communications in 1992, Miller took a graduate assistant position at Wisconsin. He then spent two seasons (1993–95) at Miami (Ohio) under Herb Sendek, during which the team made two postseason appearances. He then returned to his alma mater of Pittsburgh for a season as an assistant under Ralph Willard.

In 1996, Miller rejoined Sendek at North Carolina State. In Miller's five years in Raleigh, the Wolfpack made four postseason appearances, including a run into the 2000 NIT semifinals.

Miller's next move was a return to southwestern Ohio in 2001. This time, he would join Thad Matta's staff at Xavier as the first associate head coach in the school's history. The Musketeers won 26 games in each of Miller's three seasons under Matta, making the NCAA tournament each season. The 2004 season was especially notable. First, the Musketeers won the Atlantic 10 postseason tournament despite having to play four games to do so. Xavier then made a deep run in the subsequent NCAA tournament, finishing with the school's first-ever appearance in the Elite Eight.

In the 2010-11 season, Miller guided Arizona back to college basketball relevance. He led Arizona to its first top 10 ranking in the AP poll since January 8, 2007, and led the Wildcats to their first outright Pac-10 Regular Season Title (its 12th overall), 4th 30+ win season (1st overall), 2nd Elite Eight appearance (9th overall) and its highest coaches poll finish (9th) since the 2004–2005 season. Miller compiled a recruiting class that included 4 ESPNU top 100 recruits (#4 by Scout.com), which was widely regarded as a top ten recruiting class. In addition, Miller led the Wildcats to their first unbeaten home record (17–0) in 14 years and was named Pac-10 Coach of the Year. This was the first time an Arizona coach received this honor since Lute Olson did in 2003. The 17 consecutive home win streak tied for the second most in school history and is part of a 19-game home streak beginning in the 2009–2010 season. Miller's recruiting has improved. From not being ranked in the top-25 recruiting classes by ESPN in 2010, Miller would add to the season's success by guiding the Cats to their first Elite Eight appearance since the 2004–2005 Season as a 5-seed. In the second round, Arizona secured a 2-point victory over 12th seeded Memphis (coached by former Wildcat (and member of the 1997 national title team) Josh Pastner) with a blocked shot in the final seconds by Derrick Williams. Arizona would follow with another close game—a controversial one-point win against 4-seed Texas. In the Sweet-16 match-up, Arizona found itself pitted against top-seeded Duke, the first time since the 2001 title game that the two schools had met. Duke would extend an early lead, but 25 points from Derrick Williams kept the Cats in the game and down by 6 points at the half. In the second half, Williams' teammates picked up the slack, dominating the Blue Devils by scoring 55 second-half points and routing the defending champs 93–77. Arizona's run at the Final Four would fall 2 points short, losing to 3-seed (and eventual national champion) Connecticut 65–63.

Taking over as head coach at Xavier after Matta moved on to Ohio State, Miller took the Musketeers to four NCAA tournaments, in addition to winning three A-10 regular season championships and one conference tournament championship. In the 2008 NCAA tournament, the 3rd seeded Musketeers were eliminated in the Elite Eight by #1 seed UCLA, while in 2009, they were eliminated in the Sweet 16 by another #1 seed, Pittsburgh.

After the tournament, Miller was announced to be a possible candidate for the vacant head coaching position at Arizona, which had spent two years under interim head coaches in the wake of the illness and retirement of Hall of Fame coach Lute Olson. He initially turned the job down before changing his mind and accepting the job on April 6, 2009 despite having never visited the Arizona campus. He was succeeded at Xavier by former assistant Chris Mack. Within three months of joining the program, Miller had already assembled a recruiting class ranked #12 in the nation by Scout.com. Miller led Arizona to a 16–15 record (10–8 in the Pacific-10 Conference) in his debut season, and the Wildcats missed postseason play for the first time in 25 years.

On December 9, 2013, in Miller's fifth season as head coach of the Wildcats, Arizona became the #1 ranked team in the country for the 6th time in school history following a 9–0 start with wins over traditional national powerhouses Duke and UNLV. The Wildcats followed this up by securing a key come-from-behind victory on the road at Michigan on December 14 and led the Wildcats to their second outright Pac-12 regular season title (its 13th overall, 26th regular season overall). Arizona also secured its second unbeaten home record (18–0) and Coach Miller was again named the Pac-10/12 coach of the year. The Wildcats completed their fifth ever 30+ win season (2nd overall). In the NCAA tournament, Arizona made its second Elite Eight appearance (9th overall) of the Miller era, but fell to Wisconsin in overtime to finish the season with an overall record of 33–5, including 15–3 in Pac-12.

Miller served as the head coach of the USA men's Under-19 junior national team, which competed at the 2015 FIBA Under-19 World Championship. The USA team ended up with a perfect 7–0 record and a gold medal. As a result of this performance, Miller was named the co-national coach of the year by USA basketball. He was replaced in 2017 by close friend John Calipari as the head coach, ending his 2-year run.

He is currently the subject of a reported investigation related to the 2017 NCAA basketball corruption scandal regarding offers to illegally pay athletes for attending his school, including 2017 recruit and future #1 2018 NBA Draft pick Deandre Ayton. On February 24, 2018, Miller would not be allowed to coach the upcoming game against Oregon, with coaching instead going to Lorenzo Romar that game. On March 1, Miller denied any allegations against him and was reinstated as Arizona's head coach.