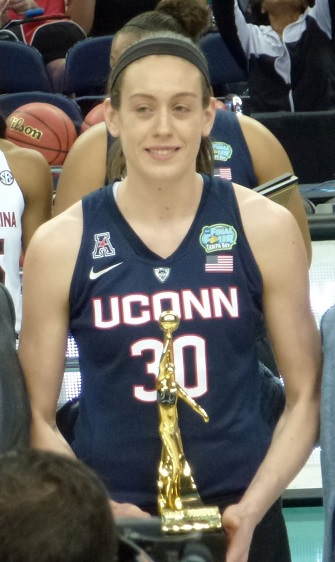 Stewart was drafted first overall in the 2016 WNBA Draft by the Seattle Storm. She would play alongside superstar veteran point guard Sue Bird. Stewart immediately made an impact in the league as she scored 23 points in her debut game against the Los Angeles Sparks. As the season progressed, Stewart continued to dominate offensively as she scored a career-high 38 points in a win against the Atlanta Dream, which is the second most points scored in a game in franchise history, behind Lauren Jackson's 47 points. Stewart averaged 18.3 points per game, 9.3 rebounds per game and 1.8 blocks per game by the end of the 2016 season. She swept the Rookie of the Month awards for the entire season leading up to her winning the WNBA Rookie of the Year Award by a landslide. Stewart also broke the WNBA record for most defensive rebounds in a season with 277 defensive rebounds (surpassing Lisa Leslie's record in 2004). Despite the record, Stewart didn't win the rebounding title, sharing the top spot with Tina Charles for most rebounds, who led the league in rebounds per game average. Her season performance helped lead the Storm back to the playoffs for the first time in 3 years with the number 7 seed in the league, but lost in the first round elimination game to the Atlanta Dream. Stewart won the 2016 ESPY Award for Best Female Athlete. The other nominees were Elena Delle Donne, Katie Ledecky, and Simone Biles. She also won Best Women's College Basketball Player at the 2016 ESPYs.

In addition to regularly scheduled post-season tournaments, the success of her high school team led to invitations to prominent national tournaments. In 2010, the C-NS team traveled to Philadelphia, New Jersey and Disney World; in 2011, the team went to the Nike Tournament of Champions in Phoenix, Arizona, considered the "premier showcase of all high school girls tournaments"; and in 2012, the Northstars played in a Basketball Hall of Fame Tournament in Springfield, Massachusetts.

In 2011, Stewart was selected to be on the USA Basketball U19 team. The U18 team won the 2010 Americas Championship, thus earning an automatic bid to the U19 World Championship, held in Puerto Montt, Chile. The USA won their first five games, but then came up short, losing to Canada 64–52. They were still qualified for the medal round, and played against France in the quarter-final; the USA was down by 13 points early in the game, but took a lead with just over a minute to go in the game and won 70–64. The USA took an early lead in the semi-final against Brazil, and qualified for the gold medal game. The final was against Spain, which the USA won 69–46. Although she was one of the youngest players on the team, Stewart averaged 11.2 points per game to post the highest scoring average of the USA players. She was one of the five players named to the all tournament team; Ariel Massengale was the other USA player to earn all tournament honors.

Stewart was recruited by many schools, but after a campus visit to UConn in 2011, she told the coaching staff, "I would like to commit if you'd take me." Committing requires a formal letter of intent. Some players sign at a media event organized to cover the ceremony; Stewart signed her letter on the hood of her car, then gave it to her father at his office to fax to the school.

In her sophomore year, she was a starter in every game, and upped her scoring average to 22 points per game. In that year, her team's record was 18–4. As a junior, she helped lead her team to the state AA public school title, with a 22–3 record for the year. Stewart averaged 24 points and 15 rebounds for the season. During her junior year, she announced that she would be attending the University of Connecticut. The day after the announcement, she dunked the ball in a game against Baldwinsville, her first career dunk. Stewart achieved a milestone on January 31, 2012, when she scored her 2,000th point, as part of a 31–0 run against Auburn.

Stewart was selected as a member of the 2012 McDonald's All-American team, which represented the 24 best female high school basketball players. The selected players were grouped into two squads that competed in the annual McDonald's All-American Game, held that year in Chicago. Stewart was selected to the 2012 Women's Basketball Coaches Association (WBCA) High School Coaches' All-America Team. The top 20 high school players in the country were named as WBCA All-Americans and were eligible to play in the all-star game. She participated in the 2012 WBCA High School All-America Game, scoring 10 points. Stewart was named the 2012 Naismith High School Girls' Player of the Year, the honor awarded by the Atlanta Tipoff Club to the best female high school basketball player in the country. In March 2012, in a surprise presentation by Tamika Catchings, Stewart received the Gatorade National Girls Basketball Player of the Year award. Stewart was one of six finalists for the Gatorade High School Athlete of the Year.

Stewart was named to the USA Basketball U-18 team. She joined future UConn teammates Moriah Jefferson and Morgan Tuck on the 12-player squad that competed in the 2012 FIBA Americas U-18 National Championship, held in August 2012, in Puerto Rico. Stewart was the youngest, and only high school player, on the 2011 USA Women's Pan American Games team, but was the player with the most international experience on the team. The team started by winning their first four games with margins of victory of 40 points or more. This set up the championship game against Brazil. The team from Brazil started strong, and held a double-digit lead early in the game. After scoring only seven points in the first quarter, the team scored 21 or more in the next three quarters and reclaimed the lead. The USA won 71–47 to claim the gold medal.

Stewart, along with teammates Moriah Jefferson and Morgan Tuck, were three of the twelve players selected to be on the team representing the US at the U19 World Championship for Women held in Klaipėda and Panevėžys, Lithuania, in July 2013. Stewart was named the USA Basketball Female Athlete of the Year for the second time. Only five other players have won this award more than once, Teresa Edwards, Lisa Leslie, Cheryl Miller, Dawn Staley and Diana Taurasi, and none have accomplished this at so young an age. Stewart helped the US to a 9–0 record in the 2013 FIBA U19 World Championship, leading to a gold medal for the team and MVP honors for Stewart.

Stewart earned American Athletic Conference Player of the Year honors for the second straight year in 2014–15, marking the fifth time a Husky was selected as the conference player of the year multiple times. She elevated nearly every aspect of her game during UConn's nine-game run through the postseason, averaging 18.1 points on 53.3 percent shooting to go along with 10.7 rebounds, and made 42.1 percent (8–19) of her attempts from beyond the 3-point arc during postseason action. She entered her senior year in 11th place on UConn's all-time scoring list with 1,960 career points, only 30 points behind Renee Montgomery's 10th-place total. She entered 2015–16 in fifth place on UConn's all-time blocked shots list with 288 career rejections and finished the season with 856 career rebounds, which is the 10th-highest total in UConn history.

Stewart was one of 33 finalists for the U.S. Women's FIBA World Championship for Women Roster. She was the only collegiate player out of 32 professional women's basketball players to be selected by the USA Basketball Women's National Team Player Selection Committee to compete for the final roster to represent the US at the FIBA World Championship for Women in Turkey during September and October 2014. Stewart made the final roster of 12 players, announced on September 23, 2014. Stewart won the gold medal with the team in 2014.

In 2017, Stewart continued to flourish after an impressive rookie season. She was voted into the 2017 WNBA All-Star Game, making it her first career all-star game appearance. On August 5, 2017, Stewart scored a season-high 32 points in an 87–80 overtime loss to the San Antonio Stars. Stewart would finish the season with a career-high of 19.9 points per game as the Storm finished with the number 8 seed in the league, but were once again a first-round exit as they were eliminated by the Phoenix Mercury.

In high school, Stewart was the National Gatorade Player of the Year, the Gatorade Female Athlete of the Year, and a McDonald's All-American. She led the University of Connecticut (UConn) Huskies to four national championships, was named the Final Four's most outstanding player a record four times, and was a three-time consensus national player of the year. Stewart was the first overall pick in the 2016 WNBA Draft and was named the 2016 WNBA Rookie of the Year. She was named the WNBA MVP in 2018 and was named an All-Star in 2017 and 2018. She led the Storm to two championships in 2018 and 2020, and received the WNBA Finals MVP award both times. Prior to her first WNBA game, Stewart signed a multi-year endorsement deal with Nike.

In 2018, Stewart would elevate her play to a superstar level. She was voted into the 2018 WNBA All-Star Game for her second all-star game appearance. On August 6, 2018, Stewart scored a season-high 32 points in a 96–80 victory over the New York Liberty, making it her fourth 30-point game of the season. By the end of the season, Stewart was ranked second in the league in scoring, she averaged new career-highs in scoring, steals, field goal percentage and three-point percentage. Stewart would also win the MVP award. This helped the Storm to a 26–8 record with the number 1 seed in the league, receiving a double-bye to the semi-finals. In the semi-finals, Stewart started off the series strong with a 28-point performance along with a career-high 6 three-pointers in a 91–87 victory against the Phoenix Mercury in Game 1. The Storm would end up winning the series in five games, advancing to the WNBA Finals for the first time since 2010. In the Finals, the Storm would defeat the Washington Mystics in a three-game sweep, winning their first championship in 8 years. Stewart averaged 25.7 points, 6.0 rebounds, 3.7 assists, 1.7 steals during the series. Stewart won Finals MVP, becoming the sixth player in league history to win both league MVP and Finals MVP in the same year.

Stewart missed the entire 2019 WNBA season after suffering an injury while playing for Russian club Dynamo Kursk in the 2019 EuroLeague Women final on April 14 that was later confirmed to be a torn Achilles. She returned to the U.S. the day after the injury and underwent surgery in Los Angeles later that week. Because the WNBA currently lacks any kind of inactive list, the Storm suspended Stewart in order to free up a roster spot. Shortly thereafter, the league made her a paid ambassador for the 2019 season, making her the first active player to fill such a role. Stewart earned slightly more in that role than she would have as a player. In July 2020, Stewart returned to playing, rejoining her teammates at the IMG Academy for training. She won her second title with the Storm in 2020 and was named the 2020 WNBA Finals MVP. In 2020 Sports Illustrated named her one of their Sportspeople of the Year for her activism off the court.