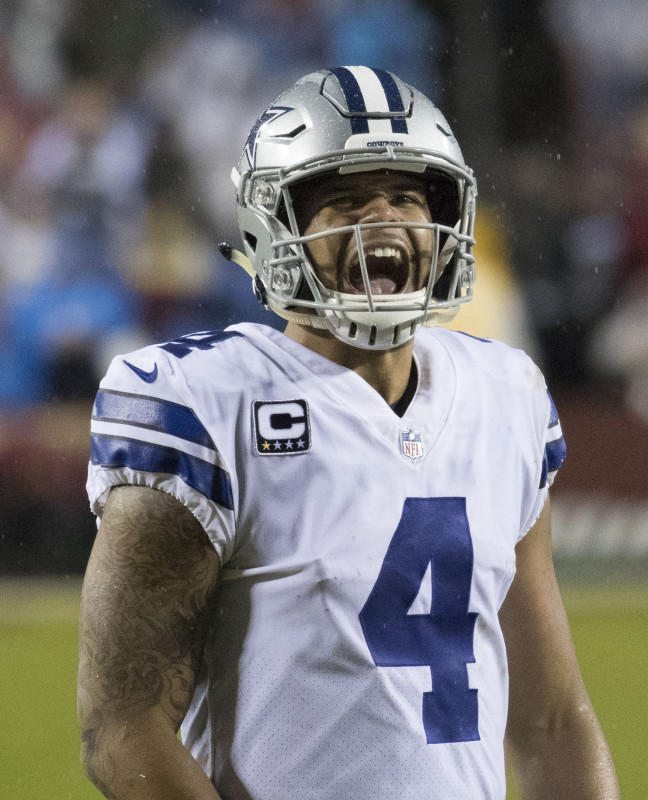 Prior to the 2015 season, he was named a 2015 National Player of the Year Candidate, was selected to two Preseason All-American teams (Athlon Sports and Phil Steele) and was chosen First Team Preseason All-SEC by the media. During the 2015 season he became the fourth player in FBS history to pass for 60 touchdowns and rush for 40 touchdowns in a career, joining Dan LeFevour of Central Michigan, Tim Tebow of Florida, and Colin Kaepernick of Nevada. His 2,411 rushing yards places him third in all-time rushing yards by a quarterback in SEC history behind Tebow and Matt Jones of Arkansas. He ranks 4th in SEC history with 107 total touchdowns responsible for (passing, rushing, and receiving) and fifth in total yards (rushing and passing) with 11,153. His streak of 288 consecutive pass attempts without throwing an interception is the longest in school history and the third longest SEC history. In the Bulldogs' 2015 game against the Arkansas he set the school single game record and tied the SEC single game record for touchdowns responsible for with seven (five passing two rushing) and set a new school record for touchdown passes in a single game. He was named the AutoNation National Offensive Player of the Week by the Football Writers Association of America, the Davey O'Brien Award National Quarterback of the Week, a Manning Award Star of the Week by the Allstate Sugar Bowl and the SEC offensive player of the week following his performance in the Bulldogs' victory over Kentucky; a game in which he passed for 348 yards and three touchdowns to go along with 117 yards and three rushing touchdowns. The six touchdowns in a single contest tied the school record set by Jackie Parker in 1952 and Prescott became the first player in school history to throw for over 300 yards and rush for over 100 yards in the same game. This was the fourth time that he has been named SEC Offensive Player of the Week, the most in program history. Prescott received further national recognition by being placed on several national award watch lists including being named a finalist for the Johnny Unitas Golden Arm Award, a semifinalist for both the Maxwell Award and the Davey O'Brien Award, placed on the watch list for the Walter Camp Player of the Year Award, the Manning Award, the Wuerffel Trophy, and the Senior Bowl, and won the Senior CLASS Award as well as being awarded the 2017 NCAA Today's Top 10 Award. For the season he passed for 3,793 yards, 29 passing touchdowns and 10 rushing touchdowns.

With the Cowboys finishing the season with a 13–3 record, the team clinched the NFC East title. In the Divisional Round, the Cowboys faced the Green Bay Packers. Prescott completed 24 of 38 for 302 yards, with a quarterback rating of 103.2, and three touchdowns and an interception. Despite his strong performance, the Cowboys lost 34–31, ending their season. After a spectacular rookie season, Prescott was selected to the Pro Bowl and named the NFL Offensive Rookie of the Year, receiving 28 of 50 votes, beating out running back and teammate Ezekiel Elliott by 7 votes. He was also ranked 14th by his peers on the NFL Top 100 Players of 2017. He was named to the PFWA All-Rookie Team, becoming the second Cowboys quarterback to receive this award, joining Troy Aikman in 1989.

Rayne Dakota "Dak" Prescott (born July 29, 1993) is an American football quarterback for the Dallas Cowboys of the National Football League (NFL). He played college football for the Mississippi State Bulldogs and was selected by the Cowboys in the fourth round of the 2016 NFL Draft.

In Week 6 of the 2016 season, Prescott, with 176 attempts, broke the record for most consecutive pass attempts without an interception to start a career; a record previously held by Tom Brady at 162 attempts in 2000–2001. This is also the record for consecutive attempts without an interception by a rookie, having broken the record set by Carson Wentz at 134 earlier in 2016. Wentz and Prescott had been exchanging the rookie record after having broken the Chad Hutchinson record of 95 set in 2002.

Prescott was redshirted as a true freshman with Mississippi State in 2011. As a backup to Tyler Russell in 2012, he played in 12 games, completing 18 of 29 passes for 194 yards with four touchdowns and no interceptions. He also scored four rushing touchdowns, with 110 yards on 32 carries.

He is the son of Nathaniel and Peggy Prescott and has two older brothers, Tad and Jace, an older sister, Natalie Prescott-Smith, and an older half-brother, Elliott Prescott, from his father's previous marriage. Jace was an offensive lineman at Northwestern State. His mother died of colon cancer in November 2013. The Faith Fight Finish Foundation by Dak Prescott has been established in her honor, which helps people deal with adversity. His older brother Jace died in April 2020. His father is African American and his late mother was European American. Prescott currently resides in Frisco, Texas.

Dak was the youngest of Peggy Prescott's three children. While she worked as a manager of a truck stop, Prescott attended Haughton High School in Haughton, Louisiana, where he played football for the Buccaneers. As a senior, he completed 159-of-258 passes for 2,860 yards and 39 touchdowns. He also rushed for 951 yards on 90 attempts with 17 touchdowns, and led Haughton to become 2010 District 1-AAAA Champions. Peggy had colon cancer and died on November 3, 2013.

In his first season as a full-time starter in 2014, Prescott led the Bulldogs to a 10–2 regular season record, its first #1 ranking in program history, and led them to the Orange Bowl. During the 2014 season, Prescott broke 10 school records including: single season passing yards (3,449), total yards of total offense (4,435), passing touchdowns (27), and total touchdowns (41). Additionally his 14 rushing touchdowns is tied for fourth in school history. Prescott also garnered several accolades throughout and following the season. He was named the Manning Award Player of the Week five times (vs. UAB, at LSU, vs. Texas A&M, vs. Auburn; vs. Vanderbilt), the 2014 SEC Offensive Player of the Week three times (at LSU; vs. Auburn; vs. Vanderbilt), the Athlon Sports, Davey O'Brien, Maxwell Award Player of the Week two times each (at LSU, vs. A&M), and was the 24/7 Sports National Offensive Player of Week (at LSU). He was named a 2014 Honorable Mention All-American by SI.com, was named to the 2014 First-Team All-SEC team by the AP, Coaches, and ESPN.com and was on the 2014 SEC Fall Academic Honor Roll. He won the Conerly Trophy, was a finalist for the Maxwell Award, the Davey O'Brien Award, the Johnny Unitas Golden Arm award, and the Manning Award. He also finished eighth in the 2014 Heisman Trophy voting and received two first place votes.

The Cowboys placed the franchise tag on Prescott on March 16, 2020, worth $31.4 million for the upcoming season.

In April 2020, Prescott received criticism for reportedly holding a party with 30 people during the COVID-19 pandemic, despite the state of Texas observing social distancing. In response, Prescott said: "To set the record straight -- I know that we all need to do our best to socially distance and like everyone else, I am continuing to adjust to what that requires, but the truth is that I was with fewer than 10 people for a home dinner -- not a party -- on Friday night."