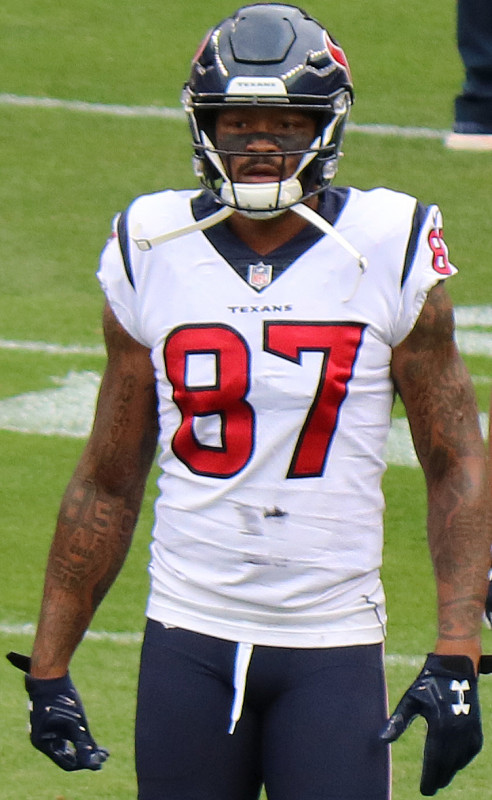 Demaryius Antwon Thomas (born December 25, 1987) is an American football wide receiver for the New York Jets of the National Football league (NFL). He played college football at Georgia Tech, and was drafted by the Denver Broncos in the first round of the 2010 NFL Draft. With Denver, Thomas made five consecutive Pro Bowls and won Super Bowl 50 over the Carolina Panthers.

Thomas attended West Laurens High School in Dexter, Georgia, where he was a three-sport star in basketball, football, and track. He played wide receiver for the Raiders football team under the direction of then head coach John Kenny. As a junior in 2004, he recorded 32 receptions for 330 yards and three touchdowns. Thomas was named an all-region and all-Heart of Georgia player. The following season, he recorded 82 receptions for 1,234 yards and ten touchdowns. After the game, he participated in the North-South All-Star game. Thomas was again selected as an all-region and all-Heart of Georgia, and the Atlanta Journal Constitution named him to its Class AA all-state first team and PrepStar to its All-Region team. Scout.com assessed him as the 22nd-ranked college prospect in the state of Georgia, and Rivals.com rated him the 34th-ranked such prospect. He received scholarship offers from Duke, Georgia, and Georgia Tech.

In 2008, Paul Johnson was hired as the head coach and implemented the run-heavy triple option offense. Thomas considered transferring but decided against doing so. During the season, he recorded 39 receptions for 627 yards and three touchdowns as the leading receiver. Despite playing in a heavily run-oriented system, as one of the team's few experienced players, Thomas recorded relatively high numbers for the Yellow Jackets. Still, compared with other receivers in the Atlantic Coast Conference Thomas's statistics were much smaller. He said, "Sometimes I think about [not getting many passes], but most of the time I just want to win." Thomas's mark was the best of any wide receiver from the school since Calvin Johnson in 2006. In the 27–0 victory over Duke on October 4, he caught nine receptions for 230 yards, the second-most in a single game in school history.

In 2007, he saw action in all 13 games including 10 starts, and recorded 35 receptions for 558 yards, which ranked second on the team behind Greg Smith. In the 2007 Humanitarian Bowl, he made four receptions for 69 yards and a touchdown in the 40–28 loss to Fresno State. The Sporting News named Thomas to its freshman All-Atlantic Coast Conference (ACC) first team and a freshman All-America honorable mention.

In 2010, a woman contacted Denver police suspecting she was drugged and raped after being at a party that Thomas attended, in the company of his Broncos teammate Perrish Cox. A DNA test later proved she was pregnant with Cox's child. Thomas was a prosecution witness and testified that Cox spoke to him before the act, saying that he was going to sleep with the girl and that she had consented beforehand and even offered for Thomas to sleep with her instead. However, Thomas said no, that he would have no part of it, that Cox was drunk and that he was messed up; Thomas left the party immediately after the conversation. Later when asked about the conversation, Thomas said that based on Cox's erratic behavior and speech he didn't fully believe Cox was serious, thinking that Cox was having some kind of drunken delusion. Although Cox was eventually acquitted, the woman filed a civil suit against both Thomas and Cox, suing them, inter alia, for battery, conspiracy and negligence. The claims against Thomas have since been dismissed.

Many draft experts had him gaining momentum with NFL scouts going into the last couple weeks leading up to the draft and most had him as the number one or two-rated wide receiver along with Dez Bryant in the 2010 NFL Draft, including Sporting News. On January 8, 2010, he declared for the 2010 NFL Draft.

In his NFL debut, Thomas had eight receptions for 97 yards and a touchdown as the Broncos beat the Seattle Seahawks 31-14. He was just the ninth player since 1970 to record at least eight catches in his first game. This was also the second most catches by a rookie in franchise history. The highlight of Thomas's season came when he beat All-Pro cornerback Darrelle Revis for a touchdown when the Broncos hosted the New York Jets on October 17, 2010.

On February 10, 2011, it was announced that Thomas had torn his achilles tendon while working out and was expected to miss a majority, if not the entirety, of the 2011 season. However, he was surprisingly activated from the Physically Unable to Perform List prior to the start of the season - Broncos general manager Brian Xanders said that Demaryius had responded to rehab well and was "ready to go." Unfortunately, during his very first practice back, Thomas broke his left pinkie finger and missed the first five games of the season.

Thomas made his season debut on October 23, 2011, against the Miami Dolphins. He linked up with quarterback Tim Tebow for the Broncos' first score of the game, which Denver would go on to win by a score of 18–15 in overtime. Despite this early promise, he only had four receptions in the next five games as the Broncos moved towards a run-heavy option offense.

Thomas broke his leg in a game against the Minnesota Vikings on December 4, 2011, after recording 144 yards and two touchdowns on just four receptions. He would end the season strongly, emerging as Tebow's favorite receiver and setting a franchise record by leading the Broncos in both receiving and targets over the final seven games.

Thomas had a breakout year in 2012, recording 94 receptions for 1,434 yards and 10 touchdowns. He led the team in targets, receptions and yards, and ranked 8th in the league in receptions, 4th in yards, and 7th in touchdowns. He was selected to his first Pro Bowl in the 2012 season after receiver Wes Welker withdrew due to injury. He was ranked 68th by his fellow players on the NFL Top 100 Players of 2013.

However, it was during the first round of the playoffs that Thomas truly made his presence felt. On January 8, 2012, Thomas caught the game-winning, 80-yard touchdown pass from Tebow on the opening play of overtime to beat the Pittsburgh Steelers in the AFC Wild Card game, 29-23. This was the first non-sudden death playoff game in NFL history but Denver's touchdown score ended the game.

Thomas set regular-season career highs in both catches, with nine, and receiving yards, with 180, in the road loss to the New England Patriots on October 7, 2012. He tied his career high in catches in games against the Carolina Panthers and the Cleveland Browns. Thomas registered three catches for 37 yards and one touchdown in the Broncos' Divisional Round loss to the Baltimore Ravens in the playoffs.

Thomas was again voted to the Pro Bowl in 2013. He was selected to the Associated Press All-Pro team for the first time in his career.

Thomas started the 2014 season quietly with 13 receptions for 141 yards and a touchdown in the first three games. On October 5, 2014, against the Arizona Cardinals, Thomas made eight receptions for 226 yards, breaking the franchise record for receiving yards in a single game held by Shannon Sharpe, and two touchdowns, of which one went for a career-high 86 yards. He earned his second AFC Offensive Player of the Week honor for his performance against the Cardinals. On October 19, 2014, against the San Francisco 49ers, Thomas caught Peyton Manning's all-time record-breaking 509th touchdown pass. On November 16, 2014, against the St. Louis Rams, Thomas caught seven passes for 103 yards, extending his own franchise record for consecutive 100 yard games to seven. Thomas finished second only to Pittsburgh's Antonio Brown in receiving yards for the 2014 season, with a career-high 1,619 yards off a career-high 111 catches. He was named to his third consecutive Pro Bowl for the 2014 season. He was ranked 20th by his fellow players on the NFL Top 100 Players of 2015.

On March 3, 2015, the Denver Broncos placed the franchise tag ($12.823 million) on Thomas. Reports indicated that the tag is non-exclusive, which means that Thomas can negotiate with other teams, and the Broncos have the right to match any offer, or receive two first-round picks as compensation.

Thomas was born to Bobby Thomas and Katina Smith in Montrose, Georgia, on Christmas Day, 1987. When he was a kid, police raided the house where his mother and grandmother lived. His mother and grandmother were arrested and sentenced to 20 years in prison and life in prison respectively for crack distribution. By all accounts a shy and introverted child, Thomas grew up with his aunt and uncle after his mother was sent to prison. As a child, he was given the nickname "Bay Bay" by his uncle in reference to the bad kids from the movie Bebe's Kids. On July 13, 2015, President Barack Obama commuted the sentence of his mother, Katina Smith. She was released at midnight on November 11–12, 2015, and saw her son play football for the first time on January 17, 2016. On August 2, 2016, Obama commuted the sentence of his grandmother, Minnie Pearl Thomas.

On July 15, 2015, Thomas signed a five-year, $70 million contract extension with the Broncos, just hours before the deadline for franchise players. The deal was similar in structure to Dez Bryant's contract extension with the Dallas Cowboys. Bryant was also franchise tagged and signed just hours before Thomas. He was also drafted just two picks after Thomas, going 24th overall in the 2010 NFL Draft. Between Peyton Manning struggling with a plantar fasciitis injury and Brock Osweiler never having a career start before the season, Thomas's production dropped, but he still had 105 receptions, six touchdowns, and 1,304 yards.

Thomas remained a strong presence for the Broncos despite inconsistent quarterback play from the Broncos in 2017. His best statistical game came in Week 6 against the New York Giants on NBC Sunday Night Football. In the 23–10 loss, he had ten receptions for 133 yards.

In his debut with the Texans, he beat the Broncos, his former team, 19–17. He made three catches for 61 yards in the win. In Week 12, against the Tennessee Titans, he recorded two touchdowns in the 34–17 victory. During Week 16, Thomas was carted off the field in the second half of a 32–30 loss to the Philadelphia Eagles with an apparent Achilles injury. It was revealed that he suffered a torn Achilles and was placed on injured reserve on December 24, 2018.

On September 10, 2019, Thomas was traded to the New York Jets in exchange for a sixth-round pick in the 2021 NFL Draft. He made his Jets' debut in a Week 2 loss to the Cleveland Browns. He scored his first touchdown as a Jet on a 14-yard pass from Sam Darnold in a Week 14 victory over the Miami Dolphins.