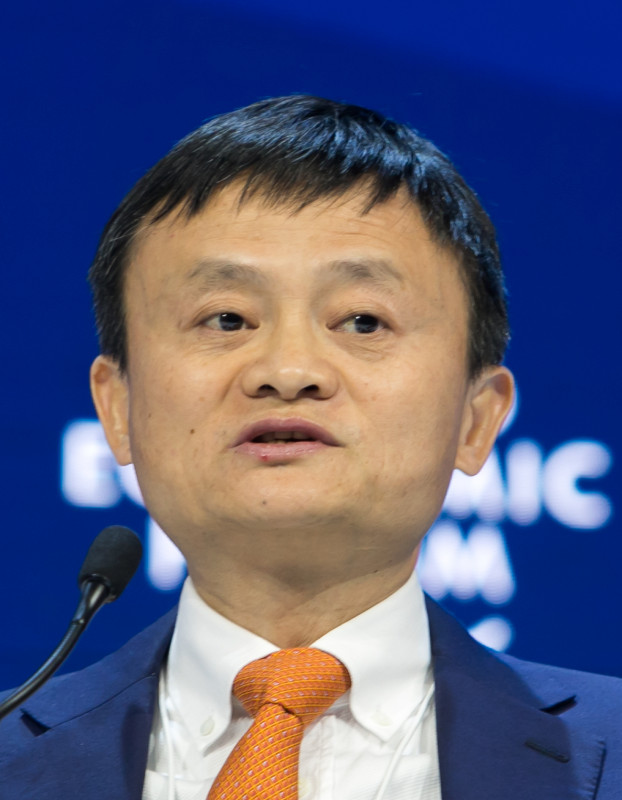 Ma was born on 10 September 1964 in Hangzhou, Zhejiang, China. He began studying English at a young age by conversing with English-speakers at Hangzhou international hotel. He would ride 70 miles on his bicycle to give tourists tours of the area to practice his English for nine years. He became pen pals with one of those foreigners, who nicknamed him "Jack" because he found it hard to pronounce his Chinese name.

Later in his youth, Ma struggled attending college. The Chinese entrance exams are held only once a year and Ma took four years to pass. Ma attended Hangzhou Teacher's Institute (currently known as Hangzhou Normal University) and graduated in 1988 with a B.A. in English. While at school, Ma was head of the student council. After graduation, he became a lecturer in English and International Trade at Hangzhou Dianzi University.

In 1994, Ma heard about the Internet. In early 1995, he went to the US with his friends, who helped introduce him to the Internet. Although he found information related to beer from many countries, he was surprised to find none from China. He also tried to search for general information about China and again was surprised to find none. So he and his friend created an "ugly" website related to China. He launched the website at 9:40 AM, and by 12:30 PM he had received emails from some Chinese investors wishing to know about him. This was when Ma realized that the Internet had something great to offer. In April 1995, Ma, his wife Cathy and a friend raised US$20,000 and started their first company. Their company was dedicated to creating websites for companies and he named it "China Pages". Within three years, the company had made 5,000,000 Chinese Yuan which at the time was equivalent to US$800,000.

Ma began building websites for Chinese companies with the help of friends in the US. He said that "The day we got connected to the Web, I invited friends and TV people over to my house", and on a very slow dial-up connection, "we waited three and a half hours and got half a page", he recalled. "We drank, watched TV and played cards, waiting. But I was so proud. I proved the Internet existed". At a conference in 2010, Ma revealed that he has never actually written a line of code nor made one sale to a customer. He acquired a computer for the first time at the age of 33.

From 1998 to 1999, Ma headed an information technology company established by the China International Electronic Commerce Center, a department of the Ministry of Foreign Trade and Economic Cooperation. In 1999, he quit and returned to Hangzhou with his team to found Alibaba, a China-based business-to-business marketplace site in his apartment with a group of 18 friends. He started a new round of venture development with 500,000 yuan.

In October 1999 and January 2000, Alibaba twice won a total of a $25 million foreign venture capital investment. The program was expected to improve the domestic e-commerce market and perfect an e-commerce platform for Chinese enterprises, especially small and medium-sized enterprises (SMEs), to address World Trade Organization (WTO) challenges. Ma wanted to improve the global e-commerce system and from 2003 he founded Taobao Marketplace, Alipay, Ali Mama and Lynx. After the rapid rise of Taobao, eBay offered to purchase the company. However, Ma rejected their offer, instead garnering support from Yahoo co-founder Jerry Yang with a $1 billion investment.

In 2008, Alibaba donated $808,000 to victims of the Sichuan earthquake.  In 2009 Jack Ma became a trustee of the Nature Conservancy’s China program, and in 2010 he joined the global Board of Directors of the organization.

At the annual general meeting of shareholders for Alibaba.com in May 2010, Ma announced Alibaba Group would begin in 2010 to earmark 0.3% of annual revenue to environmental protection, particularly on water and air-quality improvement projects. Of the future of Alibaba, he has said, "our challenge is to help more people to make healthy money, 'sustainable money', money that is not only good for themselves but also good for the society. That's the transformation we are aiming to make."

In September 2014 it was reported Alibaba was raising over $25 billion in an initial public offering (IPO) on the New York Stock Exchange. Alibaba became one of the most valuable technology companies in the world after raising the full $25 billion, the largest initial public offering in US financial history. Ma served as executive chairman of Alibaba Group, which is a holding company with nine major subsidiaries: Alibaba.com, Taobao Marketplace, Tmall, eTao, Alibaba Cloud Computing, Juhuasuan, 1688.com, AliExpress.com and Alipay. In November 2012, Alibaba's online transaction volume exceeded one trillion yuan. As of 2016 , Ma is the owner of Château de Sours in Bordeaux, Chateau Guerry in Côtes de Bourg and Château Perenne in Blaye, Côtes de Bordeaux.

In 2015, Alibaba launched a non-profit organization, Alibaba Hong Kong Young Entrepreneurs Foundation, which support Hong Kong entrepreneurs to help them grow their businesses.  During the same year, the company funded the rebuilding of 1,000 houses damaged by the earthquake-hit in Nepal, and raised money for another 9,000.

In 2017, Ma made his acting debut with his first kung fu short film Gong Shou Dao. It was filmed in collaboration with the Double 11 Shopping Carnival Singles' Day. In the same year, he also participated in a singing festival and performed dances during Alibaba's 18th anniversary party.

On 9 January 2017, Ma met with United States President-elect Donald Trump at Trump Tower, to discuss potential 1 million jobs openings in the following five years through Alibaba's interest in the country. On 8 September 2017, to celebrate Alibaba's 18th year of establishment, Ma appeared on stage and turned the event into a 'Thriller' with a Michael Jackson inspired performance. This isn't the first time Ma has performed at an Alibaba event. He performed part of "Can You Feel The Love Tonight" at the 2009 event while dressed as a heavy metal lead singer. In the same month, Ma also partnered with Sir Li Ka-shing in a joint venture to offer a digital wallet service in Hong Kong.

Ma announced on 10 September 2018 that he will step down as executive chairman of Alibaba Group Holding in the coming year.

In November 2018, the People's Daily identified Ma as a member of the Communist Party of China, something which surprised observers.