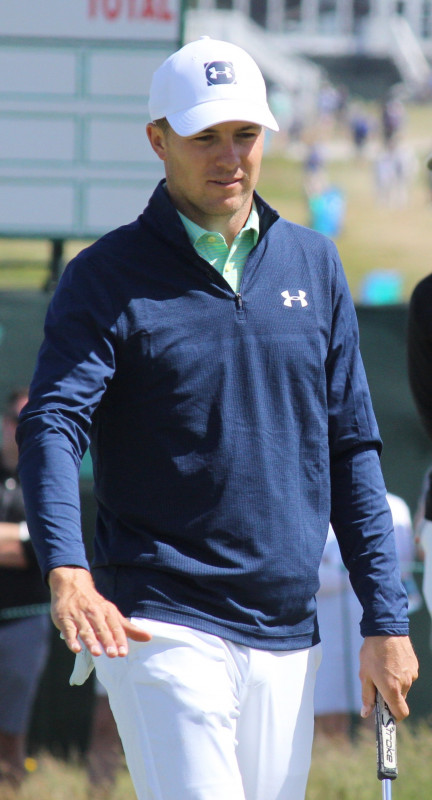 Jordan Alexander Spieth (born July 27, 1993) is an American professional golfer on the PGA Tour and former world number one in the Official World Golf Ranking. He is a three-time major winner and the 2015 FedEx Cup champion. Spieth's first major win came in the 2015 Masters Tournament, when he shot a 270 (−18) and pocketed $1.8 million. He tied the 72-hole record set by Tiger Woods in 1997 and became the second youngest golfer (behind Woods) to win the Masters. He then won the 2015 U.S. Open with a score of 5-under-par. He was the youngest U.S. Open champion since amateur Bobby Jones in 1923. He followed up with a win in the 2015 Tour Championship, which clinched the 2015 FedEx Cup. Two years later, Spieth won his third major at the 2017 Open Championship, by three shots at 12 under par.

Spieth became only the sixth player ever to win the Masters and the U.S. Open in the same year, and the first since Tiger Woods in 2002. The other four golfers to accomplish this feat are Hall of Fame members Craig Wood, Ben Hogan, Arnold Palmer, and Jack Nicklaus. He became the fourth-youngest player to win multiple major championships and the youngest winner of the U.S. Open since Bobby Jones in 1923.

Following the PGA Championship, Spieth earned selection to the 2014 Ryder Cup team, becoming the youngest American to play in the matches for 85 years since Horton Smith in 1929.

On July 14 (about two weeks before his 20th birthday) Spieth won the John Deere Classic on the fifth hole of a three-way, sudden-death playoff against defending champion Zach Johnson and David Hearn. He became the fourth youngest PGA Tour winner and the first teenager to do so since Ralph Guldahl won the Santa Monica Open in 1931. Spieth holed out from a greenside bunker on the 72nd hole to make the playoff.

During the final round Spieth briefly held a score of −19 but bogeyed the final hole resulting in him tying Tiger Woods' 1997 score record at 18-under. Spieth set the record for the most birdies during the Masters by making 28 and became the second-youngest person to win the Masters. His victory was the first wire-to-wire Masters win since Raymond Floyd's in 1976. The victory moved Spieth to #2 in the Official World Golf Ranking.

Spieth shot 66 the following day to break the 36-hole Masters scoring record by posting 14-under 130 through two rounds. The previous record, set by Raymond Floyd in 1976, was 13-under 131. He broke the 54-hole record at the Masters shooting a 16-under 200 through three rounds.

On April 9, Spieth shot an opening round 64 to finish the day eight strokes under par with a three-shot lead in the Masters Tournament at Augusta, Georgia; Spieth set a record as the youngest player to lead the Masters after the first round. His score was only one shot behind the course record of 63 shared by Nick Price and Greg Norman, with their rounds coming in 1986 and 1996 respectively.

Spieth accepted an exemption to play in the PGA Tour's HP Byron Nelson Championship in 2010. It was the event's first amateur exemption since 1995. The tournament's previous exemptions had included Trip Kuehne in 1995, Justin Leonard, and Woods in 1993. He made the cut, becoming the sixth-youngest player to make the cut at a PGA Tour event. Spieth was tied for seventh place after the third round, and finished the tournament in a tie for 16th place. He was offered another exemption into the tournament in 2011, when he again made the cut and finished in a tie for 32nd.

Spieth was born in 1993 in Dallas, Texas, to Shawn Spieth and Mary Christine (née Julius) Spieth. He attended St. Monica Catholic School and graduated from Jesuit College Preparatory School in 2011. He learned to play golf at Brookhaven Country Club.

Spieth started the year when he won the Hyundai Tournament of Champions with a dominant display that saw him race to an eight stroke victory over Patrick Reed. His score of −30 was not only a personal best, it was also only the second time a player reached −30 in a 72-hole PGA Tour event, after Ernie Els achieved the feat in 2003 at the same event. Spieth also matched Tiger Woods, by winning his seventh PGA Tour event before the age of 23.

He finished second in the 2008 and 2009 Junior PGA Championship. The American Junior Golf Association named him the Rolex Junior Player of the Year in 2009.

In 2009 at Trump National Bedminster and 2011 at Gold Mountain, Spieth won the U.S. Junior Amateur and joined Tiger Woods as the tournament's only two-time winners.

Before turning 18 in July 2011, he was No. 1 in the AJGA Golf Rankings, which promotes the best junior golfers in the world.

In 2012, Spieth earned a spot as an alternate in the U.S. Open after Brandt Snedeker withdrew from the tournament; he tied for 21st and was the low amateur. He became the number one amateur in the World Amateur Golf Ranking after his performance in the U.S. Open and Patrick Cantlay's decision to turn professional.

In 2012, after failing to advance to the Final Stage of PGA Tour qualifying school, 19-year-old Spieth turned professional midway through his sophomore year at Texas. He partnered with Under Armour for sponsorship in January 2013 and with BioSteel Sports Supplements in March.

Spieth shot a final round 62 in the Deutsche Bank Championship, vaulting him into a tie for fourth. Just two days later, captain Fred Couples selected Spieth for the United States squad in the 2013 Presidents Cup. On September 27, 2013, he was named PGA Tour Rookie of the Year. At the end of the 2013 season, he was ranked 10th on the PGA Tour money list and 22nd in the Official World Golf Ranking.

In his first start after Augusta, Spieth, playing alongside Ryan Palmer at the Zurich Classic of New Orleans, missed the cut. For the first time since his debut at the event in 2014, Spieth made the cut at The Players Championship and shot a personal best round of 65 during the third round, leaving him on course for a possible top-10 finish. However, a 2-over-par final round of 74 (including a quadruple bogey on the 72nd hole) left him at −6 for the tournament and in a tie for 41st. A tie for 21st at the AT&T Byron Nelson and a tie for 32nd at the Fort Worth Invitational would follow. In his final start before the U.S. Open, Spieth would miss the cut at the Memorial Tournament.

A month away from the Masters Tournament, Spieth was hoping to kick-start his season at the Valspar Championship, where he was victorious in 2015, which led on to his magnificent year with his win at Augusta, as well as the U.S. Open. However, Spieth's difficult campaign continued, missing the cut at +5. His next start at the WGC Match Play saw him seeded 4th. He was victorious over Charl Schwartzel and Li Haotong, but was defeated by Ryder Cup playing partner Patrick Reed in their winner-takes-all final match, which meant Spieth failed to progress out of the group stage. In his final event before Augusta, Spieth finished in a tie for 3rd at the Houston Open.

Spieth missed the cut in The Barclays and the Deutsche Bank Championship, the first two events of the FedEx Cup playoffs. However, his tied for 13th finish at the BMW Championship kept him second overall in the standings. Only needing a victory to clinch the championship, Spieth won the 2015 Tour Championship at East Lake Golf Club by four strokes. With the win, his fifth of the year, Spieth became the ninth FedEx Cup champion and earned a $10 million bonus for winning the Cup. Spieth won $12,030,485 (not including the $10 million bonus) in 2015, a PGA Tour record for a single year. He regained the world number one ranking.

After finishing second behind Jason Day at the 2015 PGA Championship, he became the world number one in the Official World Golf Ranking. He was the 18th different golfer to earn the honor. He was number one for two weeks in August 2015 and one week in September.

In April 2016, Spieth shot a bogey-free 66 during the first round of the Masters to open up a two shot lead over the field. He carded a two-over-par 74 during the second round, leading by one over Rory McIlroy entering the weekend. He led by one stroke after a third round 73. In the final round, after leading by five strokes heading into the back-nine, Spieth suffered one of the biggest collapses in Masters history, with many comparing it to the meltdown of Greg Norman at the 1996 Masters. After bogeys at the 10th and 11th holes, Spieth hit two balls into the water at the par-3 12th hole, carding a quadruple-bogey and dropping him to a tie for fourth, three shots back. He finished second in the tournament, losing to Danny Willett by three strokes. Three-time Masters winner Nick Faldo, who won the 1996 tournament, said that Spieth's collapse "made Norman's feel like a joyful stroll down Magnolia Lane".

On May 29, 2016, Spieth returned to the winner's circle for the first time since his Masters collapse when he won the Dean & DeLuca Invitational. He birdied six holes on the back nine on Sunday to see off the challenge of Harris English by three strokes.

On January 2, 2018, Spieth confirmed his engagement to long-time girlfriend, Annie Verret. The two married in November 2018 in Dallas.

In February 2019, Spieth entered the final round of the Genesis Open in a tie for fourth. However, brisk conditions and gusty winds left him with a final round 81. His scorecard featured a double bogey on No. 2, a triple bogey on No. 5 where he three-putted from 4 feet and a quadruple-bogey 8 on the treacherous 10th hole after nearly driving the green. A tie for 54th followed at the WGC-Mexico Championship. For the fourth time in five years, Spieth missed the cut at the Players Championship, before exiting in the round robin stages at the WGC-Dell Technologies Match Play and then finishing in a tie for 30th at the Valero Texas Open.

Results not in chronological order in 2020.