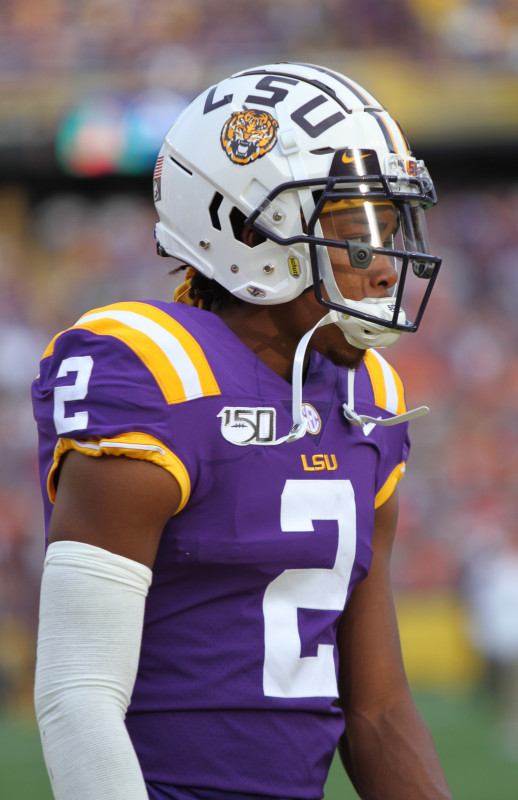 In Week 13 against the Jacksonville Jaguars, Jefferson recorded nine catches for 121 yards and a touchdown during a 27–24 overtime win, in this game he broke the 1,000 receiving yard mark. In Week 15 against the Chicago Bears, Jefferson broke Randy Moss's Vikings rookie receiving record by catching eight passes, putting him at 74 receptions, surpassing the 69 catches Moss had in 1998. By the season's end, Jefferson had set the NFL record for most receiving yards (1,400) by a rookie in NFL history after surpassing Anquan Boldin's 1,377 yards in 2003 (although his record would be broken by his former LSU teammate Ja'Marr Chase the following season). He was one of only two rookies named to the 2021 Pro Bowl, alongside defensive end Chase Young of the Washington Football Team. He was named Rookie of the Year by the Sporting News. He was named to the NFL All-Rookie Team. He was ranked 53rd by his fellow players on the NFL Top 100 Players of 2021.

Justin Jamal Jefferson (born June 16, 1999) is an American football wide receiver for the Minnesota Vikings of the National Football League (NFL). He played college football at LSU and was drafted by the Vikings in the first round of the 2020 NFL Draft. He then set an NFL rookie record for receiving yards with 1,400 (a record that was broken in 2021 by his former LSU teammate Ja'Marr Chase) and was named to the Pro Bowl. Jefferson has been a Pro Bowler and a second-team All-Pro in each of his first two seasons.

After appearing in two games and not recording a catch his first year at LSU in 2017, Jefferson was their leading receiver in 2018 with 54 catches for 875 yards and six touchdowns. He scored his first collegiate touchdown on a 65-yard reception from Joe Burrow against Ole Miss on September 29, 2018. He had two games going over the 100-yard mark with 108 in a victory over Georgia and 117 in a victory over Arkansas.

In the Tigers' second game of the 2019 season, Jefferson had nine receptions for 163 yards and three touchdowns in a 45–38 victory on the road against Texas. On October 12, against Florida, he had ten receptions for 123 yards and a touchdown in the 42–28 victory. In the SEC Championship, against Georgia, he had seven receptions for 115 yards and a touchdown in the 37–10 victory. Jefferson and the Tigers qualified for the College Football Playoffs with an undefeated record in the 2019 season. He had a historic performance in the Peach Bowl, catching 14 passes for 227 yards and four touchdowns against the Oklahoma Sooners in the College Football Playoff Semifinals. All four touchdowns came in the first half, and set a College Football Playoff game record and tied the record for any bowl game. In the National Championship against Clemson, he had nine receptions for 106 yards in the 42–25 victory. In his junior season, Jefferson led the country with 111 receptions. His 18 receiving touchdowns ranked second in the country—behind only teammate Ja'Marr Chase—and his 1,540 receiving yards were third most. He had eight games going over the 100-yard mark. On January 15, 2020, Jefferson announced that he would forgo his senior season and enter the NFL Draft.

Jefferson was selected by the Minnesota Vikings in the first round with the 22nd overall pick in the 2020 NFL Draft. The Vikings previously obtained the 22nd selection as part of a blockbuster trade that sent wide receiver Stefon Diggs to the Buffalo Bills. Jefferson signed a four-year, $13.12 million contract with the team, with a $7.1 million signing bonus. Jefferson was placed on the reserve/COVID-19 list by the team on July 27, 2020, before being cleared and activated a week later.

Jefferson's season started strong, putting up over 100 receiving yards against Seattle, Detroit, and the Chargers over the first eight games of the season. In Week 11, Jefferson had eight catches for 169 yards and two touchdowns in a 34–31 win over the Green Bay Packers, earning NFC Offensive Player of the Week. In Week 13, Jefferson caught 11 passes for 182 yards and a touchdown in a 29–27 loss to the Detroit Lions. Jefferson's 464 yards and three touchdowns through four games in the month of November earned him NFC Offensive Player of the Month, the first of his career. During Week 16, Jefferson passed Odell Beckham Jr. for most receiving yards by a player in his first two NFL seasons. Jefferson finished the season with 1,616 receiving yards, good for second-most in the NFL in 2021, and just 16 yards short of Randy Moss's single-season franchise record. Jefferson was named to the 2022 Pro Bowl, joining Randy Moss and Sammy White as the only three Vikings wide receivers to make Pro Bowls in each of their first two professional seasons. For the second consecutive year, Jefferson was named a second-team member of the AP All-Pro team, missing a spot on the first-team by a single vote. He was ranked 17th by his fellow players on the NFL Top 100 Players of 2022.

His brothers, Jordan and Rickey, also played college football at LSU. Their father, John, played Division II college basketball. On April 27, 2021, Jefferson was the first NFL player to be added to Fortnite with his dance, Get Griddy.