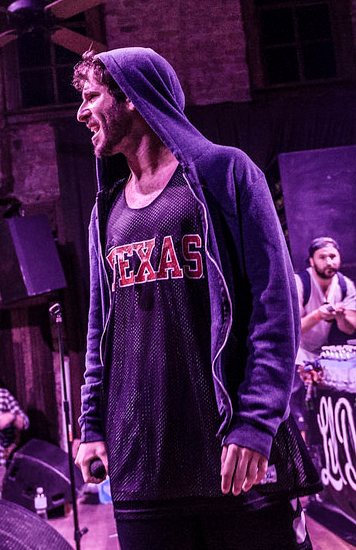 David Andrew Burd (born March 15, 1988), better known by his stage name Lil Dicky, is an American rapper, comedian and actor. He came to prominence with the release of the music video of his song "Ex-Boyfriend" in 2013, which became popular with more than one million views on YouTube in 24 hours. He released his debut album Professional Rapper in 2015.

Burd began working on his debut mixtape, So Hard, in 2011. The mixtape took Burd over two years to finish because he still had his day job at Goodby, Silverstein & Partners during its development. Burd recorded a majority of his early material for So Hard on his MacBook Pro and a $400 microphone; in 2013 he began releasing one song per week for five months straight. On April 23, 2013, Burd released the music video for his song "Ex-Boyfriend", the mixtape's leading single. The music video received one million views within 24 hours of being posted on YouTube. Burd released a new song or music video, in a series titled Hump Days. Following the release of 32 songs and 15 music videos, Burd launched a Kickstarter, stating, "I've officially run out of money... In a nutshell, you are funding phase two of my rap career." The month-long crowdfunding period began on November 20, 2013, with the goal of raising $70,000 in order to enable Burd to create and produce more music, music videos, and go touring. The Kickstarter well exceeded its target, raising $113,000.

Burd held his first live concert at TLA in Philadelphia on February 19, 2014. Burd signed with CMSN, which also manages Tyga and Chiddy Bang. He plans "on having two concurrent careers going on, as a rapper, and as a comedian/actor/writer". Burd released his debut album Professional Rapper on July 31, 2015, and features artists Snoop Dogg, T-Pain, Rich Homie Quan, Fetty Wap, Brendon Urie (Panic! at the Disco), RetroJace and Hannibal Buress. Burd appeared in a 2016 Funny or Die video "Watch Yo Self" with Mystikal and Trinidad James. On June 13, 2016, XXL Magazine released the 2016 Freshmen line-up. It included Burd, along with Anderson .Paak, Kodak Black, Lil Uzi Vert, 21 Savage, Dave East, Denzel Curry, Desiigner, G Herbo, and Lil Yachty.

On April 12, 2017, Burd released a music video for "Pillow Talking". Its special effects made it the 49th most expensive music video ever created. In an interview with XXL in April 2017, Burd mentioned that he was creating a new project and that he was also attempting to pitch a TV show to networks. In September 2017, Burd released an EP under his alter ego Brain, I'm Brain. On March 15, 2018, Burd released a new single, "Freaky Friday", featuring Chris Brown, and the associated music video. By April 9, 2018, the video had reached over 100 million views and topped the charts in New Zealand and the United Kingdom. On April 2, 2018, Burd announced his first Australian tour; he previously studied abroad for two years in Melbourne.

In 2018, his song "Freaky Friday", featuring Chris Brown, became a worldwide hit. He also gained attention for his 2019 music video "Earth", which featured many singers and actors including Ariana Grande, Justin Bieber, Ed Sheeran, Shawn Mendes, Kevin Hart, Wiz Khalifa, Charlie Puth, Katy Perry, and Leonardo DiCaprio. The song was made to raise awareness about the environment, pollution, and climate change. Burd stated that a portion of the song's proceeds are being donated to a variety of environmental charities.

On April 19, 2019, Burd released a single called "Earth", featuring artists such as Ariana Grande, Justin Bieber, Ed Sheeran, and Shawn Mendes. They all voice various animated organisms in the music video. The music video, which was created in partnership with the Leonardo DiCaprio Foundation, aimed at encouraging better environmental practices worldwide. Upon release Burd referred to the project as "the most important thing [he'll] ever do."

In 2020, Burd and producer Jeff Schaffer created a television comedy series based on Burd's life called Dave, which premiered on FXX in March 2020. The show's second season aired in 2021.

Burd and Jeff Schafer created a TV series called Dave, which portrays a fictionalized version of Burd's life as a rapper. It stars Burd, Taylor Misiak, and Christine Ko. The show premiered on March 4, 2020, on FXX. On May 11, 2020, Dave was renewed for a second season, which aired in 2021.