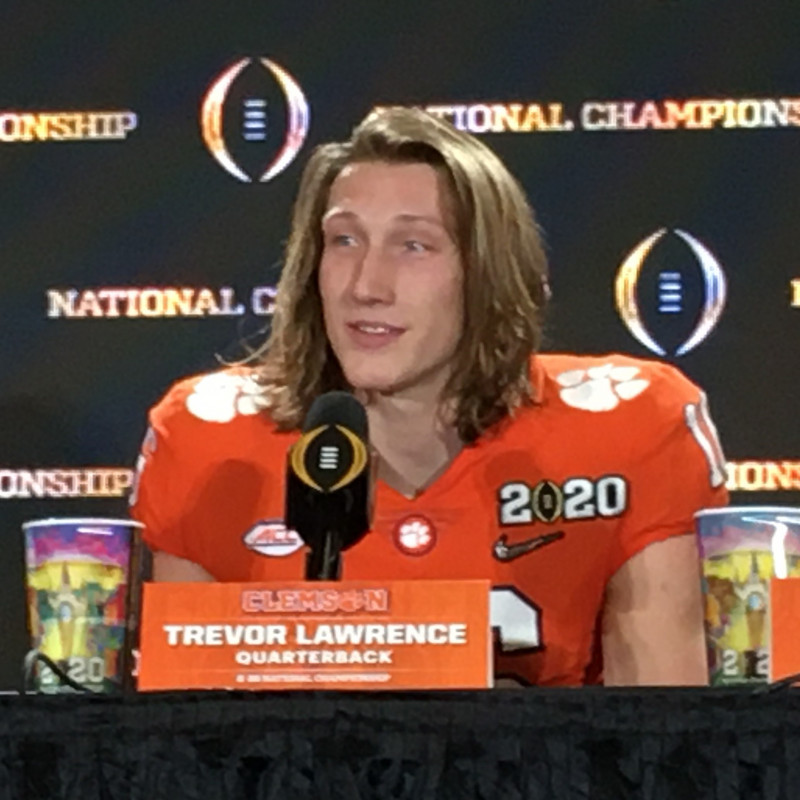 Lawrence started his freshman season behind Kelly Bryant on Clemson's depth chart, but was given equal playing time in the season's first games. Head coach Dabo Swinney named Lawrence the new starter after four games, after which Bryant announced his intention to transfer schools. Lawrence led Clemson to an undefeated regular season, a 42–10 victory over Pittsburgh in the ACC Championship Game, and a bid to play in the College Football Playoff. The Tigers were ranked No. 2 in the College Football Playoff rankings, and defeated No. 3 Notre Dame, 30–3, in the 2018 Cotton Bowl Classic. They advanced to the 2019 College Football Playoff National Championship game, where they defeated Alabama, 44–16, handing the Crimson Tide their worst loss of the Nick Saban era. Lawrence was named Offensive MVP of the game and became the first true freshman quarterback to start for a national champion since Jamelle Holieway in 1985 for Oklahoma.

William Trevor Lawrence (born October 6, 1999) is an American football quarterback for the Jacksonville Jaguars of the National Football League (NFL). Considered among the highest-touted college football prospects, he won the 2019 National Championship Game as a freshman at Clemson University and set the school's record for quarterback wins. Selected first overall by the Jaguars in the 2021 NFL Draft, Lawrence had a breakout season in 2022 when he led the Jaguars to their first division title and playoff win since 2017.

William Trevor Lawrence was born in Knoxville, Tennessee on October 6, 1999. He later attended Cartersville High School in Cartersville, Georgia, where he played football and basketball. As a junior in 2016, he was The Atlanta Journal-Constitution player of the year after completing 250 of 406 passes for 3,904 yards and 51 touchdowns. As a sophomore, he passed for 3,655 yards and 43 touchdowns and as a freshman had 3,042 yards and 26 touchdowns.

Lawrence was a five-star recruit who was regarded as one of the best high school quarterback prospects of all time. On December 16, 2016, he committed to Clemson University to play college football.

From his sophomore year to his senior year, Lawrence led the Purple Hurricanes to 41 straight victories, winning two state championships and four region titles while also receiving numerous national high school player of the year honors. In 2017, Lawrence broke the Georgia state record for passing yards and passing touchdowns, which were previously held by Deshaun Watson of Gainesville, who also played for Clemson.

Lawrence returned for his junior season with the Tigers. In his first six games of the season, Lawrence threw for 1,833 passing yards with 17 touchdowns and two interceptions. On October 30, 2020, Lawrence tested positive for COVID-19, which resulted in a 10-day quarantine, per ACC protocols. As a result, he missed two games before returning. Clemson lost one of those two games, to Notre Dame. After Lawrence returned to the team, he helped guide the Tigers back to the ACC Championship Game by finishing in second in the division-less format adopted for the 2020 season. They defeated Notre Dame in the rematch in the conference title game with Lawrence starting at quarterback, and were selected to a spot in the College Football Playoff. In the CFP semi-final, the Sugar Bowl, Lawrence and the Tigers lost to Ohio State.

In 2021, Lawrence, among other high-profile athletes and celebrities, was a paid spokesperson for FTX, a cryptocurrency exchange. In November 2022, FTX filed for bankruptcy, wiping out billions of dollars in customer funds. Lawrence, alongside other spokespeople, is currently being sued for promoting unregistered securities through a class-action lawsuit.

Lawrence is a Christian. He is noted for his long blond hair. On April 10, 2021, Lawrence married Marissa Mowry, whom he had been dating since high school. Lawrence's older brother, Chase, is a visual artist for whom Trevor has posed before.

After undergoing surgery to repair a torn labrum in his left shoulder, Lawrence was officially selected first overall by the Jacksonville Jaguars, who finished with a league-worst 1–15 record the previous season. He signed his four-year rookie contract, worth $36.8 million that included a $24.1 million signing bonus, on July 5, 2021.

On January 31, 2023, he was named to the 2023 Pro Bowl, as an alternate, replacing Patrick Mahomes, who would play in Super Bowl LVII.