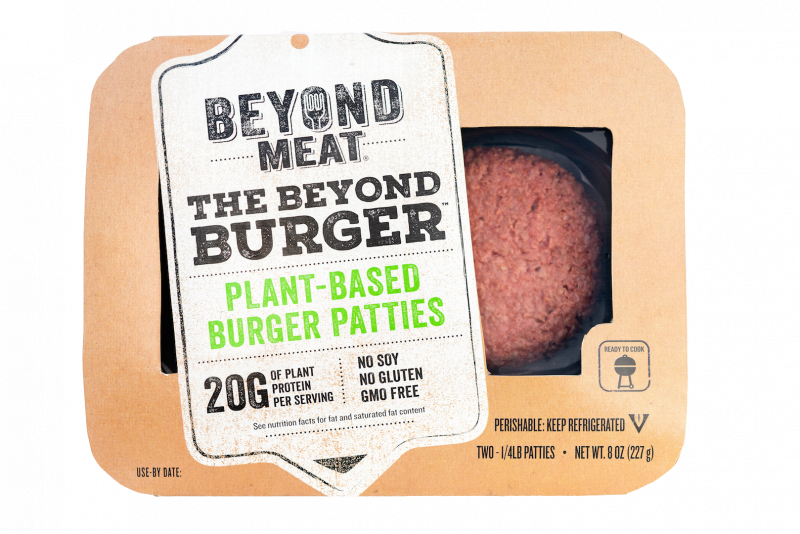 Beyond Meat, Inc. is a Los Angeles–based producer of plant-based meat substitutes founded in 2009 by Ethan Brown. The company's initial products were launched in the United States in 2012.

Ethan Brown founded the company in 2009 with the stated mission of combating climate change. Brown initially contacted two University of Missouri professors, Fu-hung Hsieh and Harold Huff, who had been developing their meatless protein for years. Upon licensing Hsieh and Huff's technology, Beyond Meat launched its first product, Beyond Chicken Strips (originally called "Chicken-Free Strips"), in Whole Foods location in 2012 and expanded nationally in 2013. In 2014, Beyond Meat developed its first plant-based beef product, Beyond Beef Crumbles, and has since expanded into plant-based pork. The People for the Ethical Treatment of Animals named Beyond Meat as its Company of the Year for 2013.

The company's first product launched in 2012 was designed to emulate chicken and sold frozen. The product was licensed from Harold Huff and Fu-Hung Hsieh at the University of Missouri. They were made from "soy powder, gluten-free flour, carrot fiber and other ingredients" which were mixed and fed into a food extrusion machine that cooks the mixture while forcing it through a specially designed mechanism that uses steam, pressure, and cold water to form the product's chicken-like texture. Although praised by some celebrities, journalists who tasted it said the "likeness to real chicken was tolerable, at best", and the chicken product was discontinued in 2019.

The company announced in 2014 that it had begun development of a new product emulating a beef burger, which was released in February 2015.

Over the years 2013 to 2016, the company received venture funding from GreatPoint Ventures, Kleiner Perkins, Obvious Corporation, Bill Gates, Biz Stone, the Humane Society and Tyson Foods. Tyson Foods purchased a 5% stake in Beyond Meat in October 2016, but sold its 6.5% stake and exited the investment in April 2019, ahead of the company's initial public offering. By 2018, Beyond Meat had raised US$72 million in venture financing. Beyond Meat is also backed by celebrity and athlete investors such as Leonardo DiCaprio, Jessica Chastain, Snoop Dogg, Liza Koshy, Chris Paul, Kyrie Irving, DeAndre Hopkins and others.

In December 2017, the company announced a vegan alternative to pork sausage called "Beyond Sausage". The three varieties of "sausage" were called Bratwurst, Hot Italian, and Sweet Italian.

In 2018, Beyond Meat opened a 26,000 square feet (2,400 m ) R&D lab in El Segundo, California. In January 2021, Beyond Meat announced that it will be opening a new global headquarters in El Segundo, CA later that year. The company says the facility will house three to four times its current number of R&D team members once the campus is complete.

"Beyond Meatballs", a plant-based alternative to traditional meatballs, were first introduced at Subway in 2019 through the Beyond Meatball Marinara sub. In September 2020, Beyond Meat announced the rollout of Beyond Meatballs at select grocery stores across the U.S.

In March 2019, a civil suit was filed against Beyond Meat by its former business partner and supplier, Don Lee Farms. This was prompted by Beyond Meat's switch to different suppliers, with whom they then shared details about the manufacturing process. Don Lee Farms alleged breach of contract, and further alleged that they had expressed "significant concerns" about food safety protocols for raw materials produced at Beyond Meat's facility which were then given to Don Lee Farms for further processing.

In May 2019, Beyond Meat went public and trades on the United States Nasdaq exchange under the symbol BYND. It is the first plant-based meat analogue company to go public. On the day of its IPO, the company was valued at $3.8 billion and was the best-performing public offering by a major U.S. company in almost two decades. As of June 2021, Beyond Meat had a market cap of $9.44 billion. In November 2020, Beyond Meat announced sales had only grown by 2% year-on-year compared to an expected increase of 40% due to the impact of COVID-19 on foodservice sales. Beyond Meat shifted its focus to grocery, convenience stores, and other forms of distribution during the COVID-19 pandemic. By September 2022, the stock price had fallen to an all-time low, that was 93 % lower than the all-time high set in July 2019 and 74 % lower than at the start of 2022. In October 2022, the company announced a 19 % workforce reduction, or approximately 200 employees, due to revenue declines.

In July 2019, Dunkin' Donuts announced that they would begin selling breakfast sandwiches using the Meatless Sausage product in Manhattan, with plans for national distribution beginning on 6 November 2019.

In 2020, Beyond Meat launched an e-commerce site to sell products directly to consumers.

In 2021, the Beyond range in the UK expanded to include 'Beyond Mince'.

In China, Beyond Meat operates an owned manufacturing plant in Jiaxing. It is the company's first "end-to-end manufacturing facility" outside of the United States and began full-scale production in 2021.

Also in January 2021, Beyond Meat and PepsiCo announced a joint venture, called The PLANeT Partnership, to develop and market plant-based snacks and drinks.

In January 2021, Taco Bell announced a collaboration with Beyond Meat, initially as a test and then as a permanent option for a new plant-based protein food.

In February 2021, Beyond Meat started a partnership with McDonald's and Yum Brands. These deals will bring new choices to the food menu, such as the McPlant Burger and the plant-protein based pizza toppings, chicken alternatives and possibly taco fillings for Yum Brands' restaurants KFC, Taco Bell and Pizza Hut. Testing of the McPlant burger by McDonald's in the USA ended in July 2022 after poor sales in 600 restaurants, but the product is sold in several European countries.

In September 2021, Beyond Meat announced it would begin selling their vegan chicken tenders in retail stores, including Walmart.