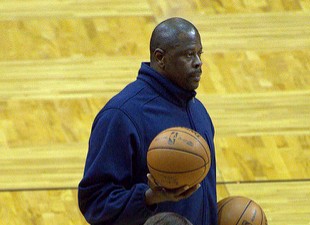 Ewing was born August 5, 1962 in Kingston, Jamaica. As a child, he excelled at cricket and soccer. In 1975, 12-year-old Ewing moved to the United States and joined his family in Cambridge, Massachusetts.

Patrick Aloysius Ewing (born August 5, 1962) is a Jamaican-American basketball coach and former professional player who is the head coach of the Georgetown University men's basketball team. He played most of his career as the starting center of the NBA's New York Knicks and also played briefly with the Seattle SuperSonics and Orlando Magic.

Ewing's first sneaker endorsement was with Adidas in 1986. In 1991, Next Sports signed a licensing deal to release footwear under Ewing's name in the United States under a new company, Ewing Athletics, which would operate until 1996. In 2012, David Goldberg and his company GPF Footwear LLC successfully teamed up with Ewing to resurrect the old Ewing Athletics line, and bring it back into stores, capitalizing on the current retro trend in the footwear market.

In an April 14, 1993 game, between the Knicks and the Charlotte Hornets, the 7 ft 0 in (2.13 m) Ewing suffered a moment of embarrassment when Muggsy Bogues, a 5-foot-3-inch-tall (1.60 m) point guard for the Hornets, managed to block his shot. The team looked like it was going to advance to the NBA Finals when they took a 2–0 lead over Michael Jordan and the Chicago Bulls. Both teams battled well, each winning on its home court in the first 4 games. However, the Bulls stunned the Ewing-led Knicks, winning Game 5 in New York 97–94 after Ewing's teammate, Charles Smith, was repeatedly blocked down low by Bulls defenders on the game's final possession. The Bulls would go on to win Game 6 96–88 and then claim their third straight NBA title. This would be one more season in which Ewing had to deal with no championships, despite the fact that the Knicks had the best regular season record in the Eastern Conference at 60–22 and had the second-best record in the NBA, behind the Phoenix Suns, who were 62–20.

In the next season, Ewing's career almost came to an end due to an injury. On December 20, 1997, in a game against the Milwaukee Bucks at the Bradley Center, Ewing was fouled by Andrew Lang while attempting a dunk. Ewing fell awkwardly and landed with all of his weight on his shooting hand. The result was a severely damaged wrist, with Ewing suffering a displaced fracture, a complete dislocation of the lunate bone, and torn ligaments. These injuries required emergency surgery to prevent nerve damage, and it was said that Ewing suffered injuries that were usually reserved for victims of vehicular accidents.

In Ewing's final season with the Knicks in 1999–2000, the team finished as the third seed in the East behind the Pacers and Heat. The team advanced to the Conference Finals again, sweeping the Toronto Raptors and beating the Heat for the third straight year in seven games, but could not defeat the Pacers and fell in six games. In his last year with the Knicks, Ewing had a game-winning slam dunk over Alonzo Mourning in Game 7 of the Eastern Conference Semifinals to lead the Knicks to the Eastern Conference Finals. During his final season with the Knicks, Ewing played in his 1,000th NBA game, finishing his Knick career with a franchise-record 1,039 games played in a Knick uniform (he is the only player to play 1,000 games with the Knicks).

After friend and rival NBA center Alonzo Mourning was diagnosed with a kidney ailment in 2000, Ewing promised that he would donate one of his kidneys to Mourning if he ever needed one. In 2003, Ewing was tested for kidney compatibility with Mourning, but Mourning's cousin was found to be the better match.

In 2000, he left the Knicks as part of a trade to the Seattle SuperSonics. In the trade, the Knicks sent Ewing to Seattle and Chris Dudley to Phoenix, and received Glen Rice, Luc Longley, Travis Knight, Vladimir Stepania, Lazaro Borrell, Vernon Maxwell, two first-round draft picks (from the Los Angeles Lakers and Seattle) and two second-round draft picks from Seattle. After a year with the SuperSonics and another with the Orlando Magic, he announced his retirement on September 18, 2002. After that season, he took a job as an assistant coach with the Washington Wizards.

In 2001, Ewing testified in part of the Atlanta's Gold Club prostitution and fraud federal trial. The owner, Thomas Sicignano, testified that he arranged for dancers to have sex with professional athletes. Ewing admitted that he went to the club, where he received oral sex twice. Ewing was never charged with a crime.

Ewing played center for Georgetown for four years—in three of which the team reached the NCAA Championship Game. ESPN designated him the 16th-greatest college basketball player of all time. He had a seventeen-year NBA career, predominantly playing for the New York Knicks, where he was an eleven-time all-star and named to seven All-NBA teams. The Knicks appeared in the NBA Finals twice (1994 and 1999) during his tenure. He won Olympic gold medals as a member of the 1984 and 1992 United States men's Olympic basketball teams. In a 1996 poll celebrating the 50th anniversary of the NBA, Ewing was selected as one of the 50 Greatest Players in NBA History. He is a two-time inductee into the Basketball Hall of Fame in Springfield, Massachusetts (in 2008 for his individual career, and in 2010 as a member of the 1992 Olympic team). Additionally he was inducted into the U.S. Olympic Hall of Fame as a member of the "Dream Team" in 2009. His number 33 was retired by the Knicks in 2003.

With Jordan out of the league, 1993–94 was considered a wide open year in the NBA, and Ewing had declared that 1994 would be the Knicks' year. He was a main contributor to the Knicks' run to the 1994 NBA Finals, in which the Knicks—in the Finals for the first time since 1973—lost in the final seconds of Games 6 and 7 to Hakeem Olajuwon's Houston Rockets. The Knicks, with Ewing leading them, had to survive a grueling trek through the playoffs simply to reach the Finals. They defeated the Bulls and Scottie Pippen in seven games in the 1994 Eastern Conference Semifinals (all seven games were won by the home team), and defeated Reggie Miller's Indiana Pacers in the Conference Finals, which also took seven games to decide. In the Finals, the Knicks stole Game 2 in Houston, but could not hold court at home, dropping Game 3 at the Garden. The Knicks then won the next two games to return to Houston ahead 3–2. However, the Rockets won the next two games. Ewing made the most of his playoff run by setting a record for most blocked shots in a Finals series (broken by Tim Duncan in 2003). He also set an NBA Finals record for most blocked shots in a single game, with 8 (surpassed by Dwight Howard in 2009).

Ewing played 1,039 games for the Knicks. On February 28, 2003, his jersey number 33 was retired by the team in a large ceremony at Madison Square Garden.

From 2003 through 2006, Ewing was an assistant with the Houston Rockets, before resigning to spend more time with his family. On July 3, 2007, Ewing was one of four assistants hired to serve under first-year Orlando Magic head coach Stan Van Gundy for the 2007–08 season.

In 2010, Ewing finally got the opportunity to coach his son Patrick Ewing Jr. in the 2010 summer league. Ewing Jr. played for the Magic.

In 2013, Ewing became an assistant coach with the Charlotte Bobcats (now Charlotte Hornets). On November 8, 2013, Ewing would end up coaching for the Bobcats as their interim head coach due to the team's regular head coach Steve Clifford having heart surgery during that time. He would end up losing in his first stint by the score of 101–91 against his former team, the New York Knicks.

In 2014, Ewing and sports agent David Falk announced a $3.3 million donation to the John R. Thompson, Jr. Intercollegiate Athletics Center under construction at Georgetown University. The amount is a reference to Ewing's number, 33.

On April 3, 2017, Ewing was hired as head coach of his former college team, the Georgetown Hoyas. In his first season as head coach, the Hoyas were 15–15 (5–13 in the Big East). The season ended without any postseason tournament play. In Ewing's second season Georgetown was 19–14, and finished tied in third place in the Big East with a 9–9 record. The Hoyas were awarded a bid into the National Invitational Tournament, their first postseason tournament since 2015. James Akinjo was named the Big East Rookie of the Year, and fellow freshmen Mac McClung and Josh Leblanc joined him on the All-Freshman Team.

For the first time ever, Ewing represented the Knicks during the NBA draft lottery on May 14, 2019. They got the third overall pick in the 2019 NBA draft.