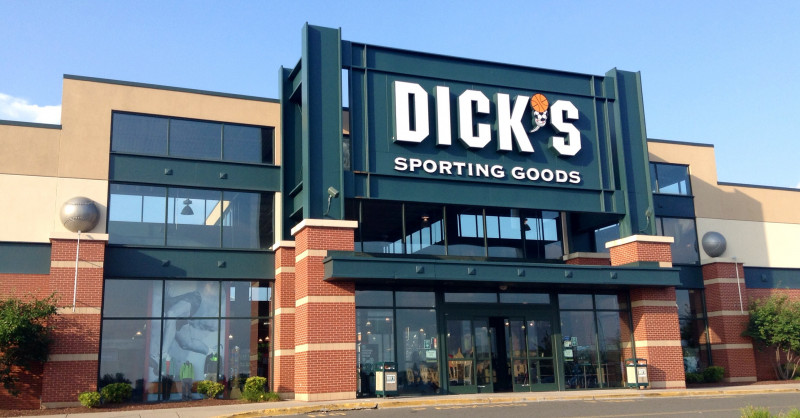 Dick's Sporting Goods, Inc. is an American sporting goods retail company, based in Coraopolis, Pennsylvania. The company was established by Richard "Dick" Stack in 1948, and has approximately 850 stores and 30,000 employees, as of 2018. Dick's is the nation's largest sporting goods retailer, and is listed on the Fortune 500.

Richard "Dick" Stack started the company as a fishing tackle store in Binghamton, New York, in 1948. He began with a $300 loan from his grandmother, who pulled from her savings, which she kept in a cookie jar.

Edward W. Stack and his siblings purchased Dick's from their father in the early 1980s, when the company had two locations in Upstate New York. Stack established a board of directors, opened additional stores, and relocated the company's headquarters to Pittsburgh in 1994. He became chairman and chief executive officer following his father's retirement in 1984, and led the company during its initial public offering in 2002.

In 2014, the Dick's Sporting Goods Foundation committed up to $2 million annually to fund youth sports via its Sports Matter program. More than $50 million has been pledged for youth sports initiatives, benefitting hundreds of thousands of athletes, as of mid 2018. The organization also launched an awareness campaign with Jon Gruden and Michael B. Jordan serving as spokespeople, and worked with director Judd Ehrlich to release We Could Be King, a documentary film about two Philadelphia high school football teams forced to merge due to lack of funding. Following Hurricane Harvey and Hurricane Irma (2017), the foundation donated $2 million to youth sports facilities and program in affected areas, including $120,000 for Houston's reVision soccer team, composed of immigrants from Africa. Dick's later featured the team in a documentary-style advertisement called reVision FC: A Holiday Assist.

Dick's launched the women's athleisure, fitness, and lifestyle store Chelsea Collective in 2015, opening two stores in Pittsburgh and Tysons, Virginia, in the Washington, D.C. metro area. The shops closed in 2017.

Dick's partnered with Carrie Underwood in 2015 to launch Calia, a fitness lifestyle line.

In 2015, the company sponsored Olympic and Paralympic athletes and hopefuls, and became the "official sporting goods retailer" for Team USA for the 2016 Summer Olympics and Paralympics. Dick's and Team USA established the Ambassador Program and Contender's Program in partnership with the United States Olympic Committee, employing Olympians and prospective Olympic athletes. Dick's employed approximately 200 Team USA athletes competing in 35 different Olympic and Paralympic sports, as of March–July 2016. The athletes worked in 89 stores in 32 states.

Dick's acquired Golfsmith, the largest golf retailer in the United States, at a bankruptcy auction in October 2016. Dick's bid approximately $70 million for all of Golfsmith's intellectual property and inventory. The company planned to retain around 30 of Golfsmith's more than 100 locations, as well as 500 employees. Dick's rebranded 36–38 Golfsmith stores in 16 U.S. states as Golf Galaxy in 2017. This increased the number of Golf Galaxy stores to 98, located in 33 states.

Dick's is the largest sporting goods retail company in the United States, with approximately 850 stores, as of 2018. The public company is based in Coraopolis, Pennsylvania, outside Pittsburgh, and has approximately 30,300 employees, as of January 2018. The company's subsidiaries include Field & Stream and Golf Galaxy, and previously, Chelsea Collective and True Runner. In 2017, there were 690 Dick's stores, close to 100 Golf Galaxy locations, and approximately 30 Field & Stream stores. The company launched Team Sports HQ, a collection of digital products, following the acquisitions of Affinity Sports, Blue Sombrero, and GameChanger.

The company currently operates five distribution centers. The most recent, in Conklin in Southern Tier, New York opened in January 2018, and was further expanded to fulfill online sales a few months later.