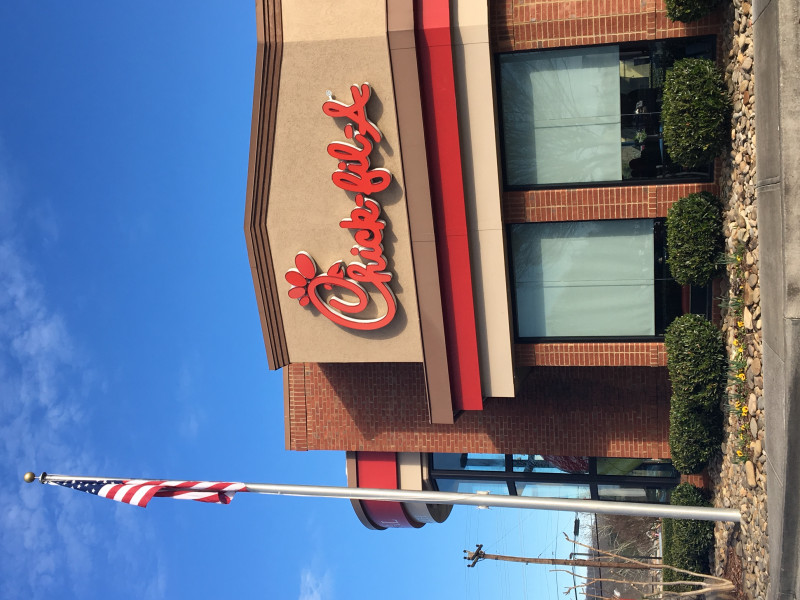 The chain's origin can be traced to the Dwarf Grill (now the Dwarf House), a restaurant opened by S. Truett Cathy, the chain's former chairman and CEO, in 1946. The restaurant is located in Hapeville, Georgia, a suburb of Atlanta, and is near the location of the now-demolished Ford Motor Company Atlanta Assembly Plant, for many years a source of many of the restaurant's patrons.

Truett Cathy opened his first restaurant in 1946, The Dwarf Grill – later renamed the Dwarf House – in Hapeville, Georgia, and developed the pressure-cooked chicken breast sandwich there. At the original Chick-fil-A Dwarf Grill, in addition to the full-size entrances, there is also an extra small-sized front door. The original Dwarf House in Hapeville, Georgia is open 24 hours a day, six days a week, except on Sundays, Thanksgiving, and Christmas. The store closes at 10:00 p.m. on Saturday nights, and the day before Thanksgiving and Christmas and reopens at 6 a.m. on Monday mornings and the day after Thanksgiving and Christmas. It has a larger dine-in menu than the other Dwarf House locations as well as an animated seven dwarfs display in the back of the restaurant. It was across the street from the former Ford Motor Company factory called Atlanta Assembly.

In 1961, after 15 years in the fast food business, Cathy found a pressure-fryer that could cook the chicken sandwich in the same amount of time it took to cook a fast-food hamburger. Following this discovery, he registered the name Chick-fil-A, Inc. The company's trademarked slogan, "We Didn't Invent the Chicken, Just the Chicken Sandwich," refers to their flagship menu item, the Chick-fil-A chicken sandwich. Though Chick-Fil-A was the first national chain to make a quick-service, fried chicken sandwich its flagship item, several sources have demonstrated that Cathy's much broader claim to have "invented the chicken sandwich," which is referenced in the company's slogan and has been repeatedly featured in press materials, is untrue.

From 1964 to 1967, the sandwich was licensed to over fifty eateries, including Waffle House and the concession stands of the new Houston Astrodome. The Chick-Fil-A sandwich was withdrawn from sale at other restaurants when the first standalone location opened in 1967, in the food court of the Greenbriar Mall in Atlanta.

During the 1970s and early 1980s, the chain expanded by opening new locations in suburban malls' food courts. The first freestanding location was opened April 16, 1986, on North Druid Hills Road in Atlanta, Georgia, and the company began to focus more on this stand-alone type unit rather than on the food court type. Although it has expanded outward from its original geographic base, most new restaurants are located in Southern suburban areas.

In September 1994, Chick-fil-A opened its first location outside of the United States inside a student center food court at the University of Alberta in Edmonton, Alberta, Canada. This location did not perform very well and was closed within two or three years. The company returned to the province of Alberta by opening an outlet at the Calgary International Airport in Calgary in May 2014. This restaurant closed in 2019.

"Eat Mor Chikin" is the chain's most prominent advertising slogan, created by The Richards Group in 1995. The slogan is often seen in advertisements, featuring Holstein dairy cows that are often seen wearing (or holding) signs that (usually) read "Eat Mor Chikin" in all capital letters. The ad campaign was temporarily halted on January 1, 2004 during a mad cow disease scare, so as not to make the chain seem insensitive or appear to be taking advantage of the scare to increase its sales. Two months later, the cows were put up again. The cows replaced the chain's old mascot, Doodles, an anthropomorphized chicken who still appears as the C on the logo.

In 1996, the first Truett's Grill was opened in Morrow, Georgia. The second location opened in 2003 in McDonough, Georgia, and a third location opened in 2006 in Griffin, Georgia. Similar to the Chick-fil-A Dwarf Houses, these independently owned restaurants offer traditional, sit-down dining and expanded menu selections in a diner-themed restaurant. In 2017, Chick-fil-A demolished several Dwarf House locations to replace them with Truett's Grill locations.

In August 1996, Chick-fil-A opened its first location outside of North America by building a restaurant in Durban, South Africa. A second location was opened in Johannesburg in November 1997. Since neither of the South African locations was profitable, both of these locations were closed in 2001.

In 2011, food blogger and activist Vani Hari wrote a post titled "Chick-fil-A or Chemical Fil-A?" on her website, FoodBabe.com. She asserted that Chick-fil-A sandwiches contained nearly 100 ingredients, including peanut oil with TBHQ. In October 2012, Chick-fil-A invited Hari to meet with company executives at its headquarters. In December 2013, Chick-fil-A notified Hari that it had eliminated the dye Yellow No. 5 and had reduced the sodium content in its chicken soup. The company also said that it is testing a peanut oil that does not contain TBHQ and that it would start testing sauces and dressings made without high-fructose corn syrup in 2014.

In June and July 2012, Chick-fil-A's chief operating officer Dan T. Cathy made several public statements about same-sex marriage, saying that those who "have the audacity to define what marriage is about" were "inviting God's judgment on our nation". Several prominent politicians expressed disapproval. Boston Mayor Thomas Menino and Chicago Alderman Proco "Joe" Moreno said they hoped to block franchise expansion into their areas. The proposed bans drew criticism from liberal pundits, legal experts, and the American Civil Liberties Union. The Jim Henson Company, which had a Pajanimals kids' meal toy licensing arrangement with Chick-fil-A, said it would cease its business relationship, and donate the payment to the Gay & Lesbian Alliance Against Defamation. Chick-fil-A stopped distributing the toys, claiming that unrelated safety concerns had arisen prior to the controversy. Chick-fil-A released a statement on July 31, 2012, saying, "We are a restaurant company focused on food, service, and hospitality; our intent is to leave the policy debate over same-sex marriage to the government and political arena."

According to the Food and Drug Administration (FDA), antibiotics used in livestock, many of which are also used to treat humans, have contributed to the rise of dangerous bacteria. In December 2012, the FDA announced plans to phase out certain antibiotics in the food production industry.

Truett Cathy visited Hawaii and loved the experience so much that he wanted to bring Hawaii to Fayetteville Georgia. At the age of 92 he opened Truett's Luau in 2013. The menu includes island favorites with a southern spin. The restaurant offers sit down, counter and drive-thru service.

A 2011 letter to Vermont artist Bo Muller-Moore who screen prints T-shirts reading: "Eat More Kale" demanded that he cease printing the shirts and turn over his website. The incident drew criticism from Vermont governor Peter Shumlin, and created backlash against what he termed Chick-fil-A's "corporate bullying." On December 11, 2014, Bo Muller-Moore announced that the U.S. Patent Office granted his application to trademark his "Eat More Kale" phrase. A formal announcement of his victory took place on December 12, 2014, with Shumlin and other supporters on the Statehouse steps. His public fight drew regional and national attention, the support of Shumlin, and a team of pro-bono law students from the University of New Hampshire legal clinic.

In October 2015, the company opened a three-story 5,000 square feet (460 m ) restaurant in Manhattan that became the largest free-standing Chick-fil-A in the country at that time.

After 22 years with The Richards Group, Chick-fil-A switched to McCann New York in 2016. Along with the cows, ads included famous people in history in a campaign called "Chicken for Breakfast. It's not as crazy as you think."

On December 17, 2017, Chick-fil-A broke their tradition and opened on a Sunday to prepare meals for passengers left stranded during the power outage at Atlanta Hartsfield-Jackson International Airport, and on January 13, 2019, a Chick-fil-A franchise in Mobile, Alabama, opened on Sunday to honor a birthday wish of a 14-year-old boy with cerebral palsy and autism.

In July 2018, Chick-fil-A announced it would be opening its first location in Hawaii in Kahului in early 2022, with additional locations in Honolulu and Kapoleo to follow. In December 2020, it was announced the company would open a new location in Puerto Rico. The first Puerto Rican location opened on March 3, 2022 in Bayamón.

In July 2018, Chick-fil-A announced plans to expand within Canada by opening a new restaurant in Toronto, Ontario, in 2019. That location opened on September 6, 2019 in the Yonge and Bloor Street area, marked by protests criticizing the company's violation of animal rights and "history of supporting anti-LGBTQ causes". Chick-fil-A announced that it would open two other locations in Toronto during 2019, and 12 additional stores in the Greater Toronto Area over the subsequent five years. The chain's second Toronto location opened at the Yorkdale Shopping Centre in January 2020.

In February 2019, Chick-fil-A opened a store on a 12-month pilot scheme in Aviemore, Scotland. The store was closed in January 2020 amidst protest and controversy from locals and customers regarding the chain's former donations to charities supporting anti-LGBT rights causes. The reason for closing however was not the controversy (only 1,000 signatures were gained in a petition) but the pop-up nature of the experiment and the competition from more established outlets.

A Chick-fil-A operated in Edinburgh during Spring 2018. On October 10, 2019, Chick-fil-A returned to Europe, with the opening of a store at The Oracle shopping centre in Reading, UK. The store closed in March 2020 after The Oracle opted not to continue the lease of the location beyond the six-month pilot period in the face of continued protests over the chain's anti-LGBTQ stance.

The company expanded to other areas of Ontario in 2021, opening standalone locations with drive-thrus in Kitchener and Windsor, in August and October respectively.