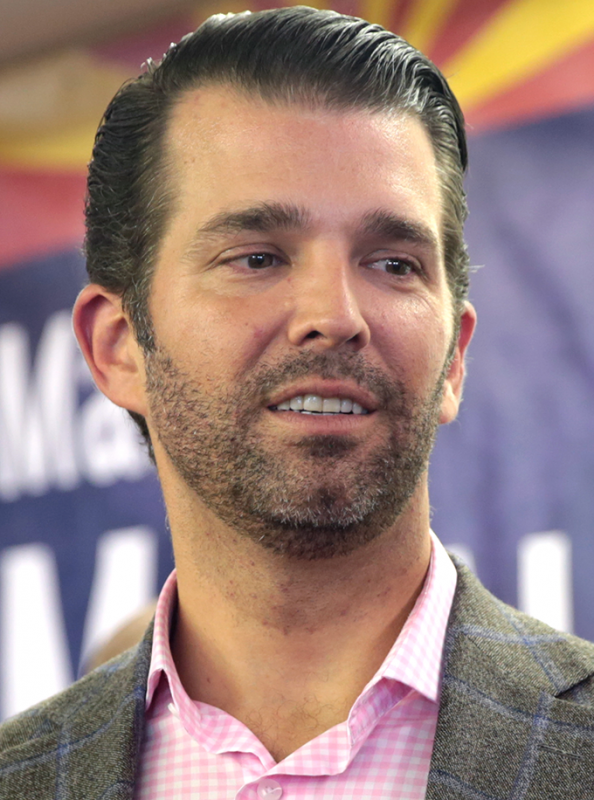 Donald John Trump Jr. (born December 31, 1977) is an American businessman and former reality television personality. He is the eldest child of US president Donald Trump and his first wife Ivana.

Trump Jr. was born on December 31, 1977, in Manhattan, New York City, to Ivana and Donald Trump. He has two younger siblings, Ivanka and Eric. He also has two half siblings, Tiffany, from his father's marriage to Marla Maples, and Barron, from his father's current marriage to Melania Trump. Through his father, Trump Jr. is a grandson of Fred Trump and great-grandson of Elizabeth Trump, who founded what became the Trump Organization. As a boy, Trump Jr. found a role model in his maternal grandfather, Miloš Zelníček, who had a home near Prague, where he spent summers camping, fishing, hunting and learning the Czech language.

After graduating from Penn in 2000, Trump moved to Aspen, Colorado, where he hunted, fished, skied, lived in a truck, and worked as a bartender for a year, before returning to join the Trump Organization in New York. Trump has supervised building projects, which included 40 Wall Street, Trump International Hotel and Tower, and Trump Park Avenue, In 2006 he helped launch Trump Mortgage, which collapsed less than a year later. In 2010 he became a spokesperson for Cambridge Who's Who, a public relations firm that had received hundreds of complaints filed with the Better Business Bureau. He appeared as a guest adviser and judge on many episodes of his father's reality television show The Apprentice, from season 5 in 2006 to his father's last season in 2015.

Trump Jr. was educated at Buckley School and the Hill School, a college preparatory boarding school in Pottstown, Pennsylvania, followed by the University of Pennsylvania's Wharton School, where he graduated in 2000 with a B.S. in Economics.

Trump Jr. is an enthusiastic hunter. Controversy erupted in 2012 when the pictures he had taken of his hunting trophies in 2010 were published. In one photo, Trump Jr. has his arms around a dead leopard; in another, he is holding a knife in one hand and a bloody elephant tail in the other. Although the hunt was legal, anti-hunting activists criticized him. At least one sponsor dropped his father's TV show The Celebrity Apprentice. On Earth Day in 2017, Trump Jr. legally hunted prairie dogs in Montana with GOP Congressional candidate Greg Gianforte. President Trump reversed the decision to allow elephant trophies imported from Zambia and Zimbabwe, pending further review.

In 2011, Trump Jr. responded to criticism of the Tea Party movement by Florida Representative Frederica Wilson by confusing Wilson with California Representative Maxine Waters and saying her colorful hats made her look like a stripper.

During his father's presidential campaign, Trump Jr. caused controversy in 2016 when he posted an image that compared refugees to Skittles, saying "If I had a bowl of skittles and I told you just three would kill you. Would you take a handful? That's our Syrian refugee problem." The makers of Skittles condemned the tweet, saying "Skittles are candy. Refugees are people. We don't feel it's an appropriate analogy." The Cato Institute reported that year that the chances "an American would be killed in a terrorist attack committed by a refugee was one in 3.64 billion" per year.

On March 1, 2016, an interview with white supremacist James Edwards and Trump Jr. was aired. The campaign initially denied the interview had taken place; later Trump Jr. claimed it was unintentional. As a consequence of the interview, mainstream media outlets have accused Trump Jr. of being either a believer in the white genocide conspiracy theory, or pretending to be an advocate for political gain.

In September 2016, Trump Jr. cited Holocaust imagery to criticize what he perceived as the mainstream media's seemingly uncritical coverage of Hillary Clinton during her campaign, by "letting her slide on every discrepancy", while also accusing Democrats involved in the 2016 campaign of lying. Trump Jr. said if the Republicans were committing the same offences mainstream outlets would be "... warming up the gas chamber right now." Also that month, Trump Jr. shared an image on Instagram depicting a cross between his father and Pepe the Frog. When asked on Good Morning America about Pepe the Frog and its associations with white supremacy, Trump Jr. said he had never heard of Pepe the Frog and thought it was just a "frog with a wig".

On January 11, 2017, Trump's father announced that he and his brother Eric would oversee a trust that included the Trump Organization's assets while his father was president, in order to avert a conflict of interest.

In March 2017, Trump Jr. criticized the mayor of London, Sadiq Khan, after the 2017 Westminster attack, which in turn led British lawmakers to criticize Trump Jr. British journalists said Trump Jr. had quoted Khan out of context when he criticized him. Khan did not respond to the criticism, saying he had "far more important things" to do.

In April 2017, he campaigned for Montana congressional candidate Greg Gianforte, and in May met with Republican National Committee officials to discuss the party's strategy and resources.

Approximately a year later, Trump Jr. initially told the media that adoption of Russian children was the main subject of the meeting. On July 8, 2017, Trump Jr. tweeted his email exchange with Goldstone. It revealed that Trump Jr. had agreed to attend the meeting with the understanding he would receive information damaging to Hillary Clinton, which he considered opposition research. Goldstone also wrote in one of Trump Jr.'s publicly disclosed emails that the Russian government was involved. Robert Mueller, the special counsel of the Department of Justice in charge of Russia-related investigations, investigated the emails and the meeting. Although the White House lauded Trump Jr. for his transparency, he released the e-mails only after The New York Times had informed him that they had them and were going to publish a story about them.

On October 31, 2017, Trump Jr. tweeted that he would take away half his three-year-old daughter's Halloween candy because, he wrote, "it's never too early to teach her about socialism."

In November 2017, news broke that Julian Assange had used the WikiLeaks Twitter account to corresponded with Donald Trump Jr. during the 2016 presidential election. Trump Jr. had already provided this correspondence to congressional investigators who were looking into Russian interference in the 2016 election.

On November 7, 2017, he posted tweets urging voters in Virginia's gubernatorial election to vote "tomorrow", the day after the election.

In February 2018, advertisements in Indian newspapers promoted a deal whereby anyone who purchased Trump Organization apartments in Gurgaon before February 20 would be invited to have a "conversation and dinner" with Trump Jr. The ads were criticized by corruption watchdogs as unethical.

On March 15, 2018, it was announced that the couple had separated and she had filed for uncontested divorce in Manhattan Supreme Court. However, later it was revealed that the divorce is contested. The complaint is secret except for the title of the case. On February 22, 2019, they announced that they settled their divorce at the end of 2018.

In May 2018, Trump Jr. retweeted a false and antisemitic conspiracy theory that George Soros, the Jewish Hungarian-American businessman and philanthropist, was a "nazi who turned in his fellow Jews to be murdered in German concentration camps & stole their wealth". The tweets originated from Roseanne Barr, whose TV show was cancelled the same day for posting a series of racist and antisemitic tweets. George Soros's spokesperson responded to the tweets, "George Soros survived the Nazi occupation of Hungary as a 13-year-old child by going into hiding and assuming a false identity with the help of his father, who managed to save his own family and help many other Jews survive the Holocaust."

In June 2018, Trump Jr. liked a tweet suggesting that the migrant children separated from their parents due to the Trump administration family separation policy were actually actors.

In August 2018, Trump Jr. shared on Instagram of a doctored image which had been crudely edited to falsely state that CNN had reported President Trump's approval rating as 50%. The actual CNN report had Trump at 40%, below Obama's 45% at the same point of his presidency. Trump Jr. deleted the image two days later.

In September 2018, when Hurricane Florence was affecting the United States, Trump Jr. tweeted a picture of CNN journalist Anderson Cooper waist-deep in floodwaters when another man in the same picture was standing knee-deep a distance away. Trump Jr. then proposed a conspiracy theory that CNN was "lying to try to make [his father, President Trump] look bad". In actuality, the picture of Cooper was around ten years old, taken during 2008's Hurricane Ike before Trump became president, and Cooper was videoed talking about how the floodwaters were receding.

In 2019, Trump Jr. released the book, Triggered: How the Left Thrives on Hate and Wants to Silence Us. The book is critical of political correctness, and argues that the American left has a victimhood complex. The Washington Post noted, "yet, in his telling, the real victim is often him, his father or another Trump family member." In the book, Trump Jr. pushes conspiracy theories about how the intelligence community has attempted to harm President Trump, comparing President Trump's experiences with the FBI harassment campaign against civil rights leader Martin Luther King Jr. Trump Jr. also writes about a visit to Arlington National Cemetery (a military cemetery), saying he got emotional looking at the graves and that it reminded him of "all the sacrifices" the Trump family had made, including "voluntarily giving up a huge chunk of our business and all international deals to avoid the appearance that we were 'profiting off of the office'". Fact-checkers have noted that Trump still owns the family business, and that the Trump family have continued to engage in international business deals since Trump became president. In a review for The Washington Post, Carlos Lozada said, "fails as memoir and as polemic: Its analysis is facile, its hypocrisy relentless, its self-awareness marginal. (The writing is wretched, even by the standards of political vanity projects.)"

Trump Jr. has also been active politically, serving in his father's presidential campaign. He had a meeting with a Russian lawyer, who promised damaging information about the campaign of Hillary Clinton in the 2016 presidential election. He is notorious for promoting conspiracy theories and false information. As of May 2019, Trump Jr. is under investigation by the United States attorney for the District of Columbia, with Ivanka and Eric Trump, for their role in their father's inauguration. He is also under investigation, along with Allen Weisselberg, for a possible role in concealing hush money payments and signed checks reimbursing per Michael Cohen regarding his father and the Trump Organization, by the Southern District of New York.

ProPublica revealed on December 11, 2019, that the government of Mongolia retroactively granted Donald Trump Jr. a hunting permit for the endangered Argali mountain sheep. The opportunity to go hunting in Alaska with Trump Jr. was a prize at a fundraising auction for Safari Club International in 2020.