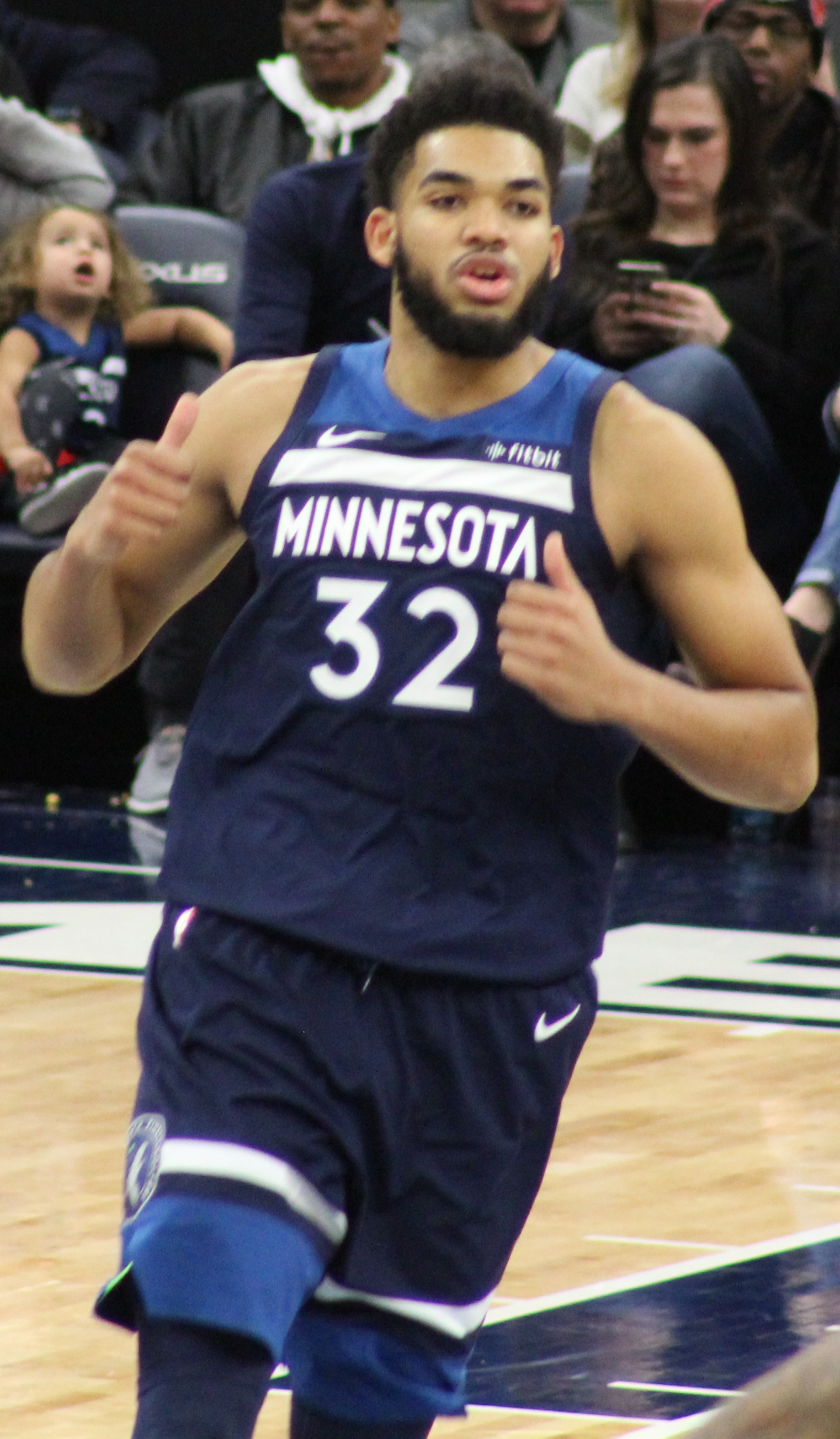 On March 25, Towns grabbed 10 rebounds against the Washington Wizards, setting a Minnesota rookie rebounding record, pushing his season total to 741 and passing Kevin Love's record of 734. On April 7, he recorded his 50th double-double of the season with 17 points and 10 rebounds in a 105–97 win over the Sacramento Kings. Four days later, in a loss to the Houston Rockets, Towns passed Christian Laettner for the franchise's rookie scoring record with 1,475 points. Earlier that day, he was named Western Conference Player of the Week for games played Monday, April 4 through Sunday, April 10. In the Timberwolves' season finale on April 13, Towns recorded 28 points and 14 rebounds in a 144–109 win over the New Orleans Pelicans. He played and started in all 82 games for the Timberwolves in 2015–16, averaging 18.3 points and 10.5 rebounds per game; he subsequently earned unanimous NBA Rookie of the Year honors. Towns earned Western Conference Rookie of the Month honors in each of the season's six months, becoming the first Timberwolves player to do so. In addition, he became just the fifth unanimous NBA Rookie of the Year, and with teammate Andrew Wiggins winning the award in 2014–15, Minnesota became the first team with back-to-back Rookie of the Year winners since the Buffalo Braves in 1972–73 (Bob McAdoo) and 1973–74 (Ernie DiGregorio), as well as the first team with back-to-back No. 1 draft picks earning Rookie of the Year honors. He also earned NBA All-Rookie First Team honors.

On November 15, 2017, Towns had 26 points and 16 rebounds for Minnesota on the night he turned 22, helping the Timberwolves end a 12-game losing streak to the San Antonio Spurs with a 98–86 victory. Towns finished in the top 10 in almost every statistical category in NBA history compiled prior to the player's 22nd birthday. He ranked eighth in points, third in rebounds and second in double-doubles (124), trailing only Dwight Howard (169). Towns subsequently earned Western Conference Player of the Week honors for games played from Monday, November 13 through Sunday, November 19. On December 14, 2017 against the Sacramento Kings, Towns had 30 points, 14 rebounds, five assists and five blocks, joining Kevin Garnett as the only Wolves players to collect 30+ points, 10+ rebounds, 5+ assists and 5+ blocks in a single game. On December 31, 2017, he had 18 points, 14 rebounds and a career high-tying six blocks in a 107–90 win over the Indiana Pacers. On January 5, 2018, he recorded 25 points and a career-high 23 rebounds in a 91–84 loss to the Boston Celtics. On January 12, 2018, Towns fell one assist shy of his second career triple-double, scoring 23 points and grabbing 15 rebounds in the Timberwolves' 118–108 victory over the New York Knicks. On January 23, 2018, he was named a Western Conference All-Star reserve. On March 11, 2018, he recorded 31 points and 16 rebounds in a 109–103 win over the Golden State Warriors. Two days later, he scored a season-high 37 points in a 116–111 win over the Washington Wizards. On March 20, 2018, he recorded his NBA-best 60th double-double with 30 points and 10 rebounds in a 123–109 win over the Los Angeles Clippers. On March 28, 2018, he scored a franchise-record 56 points and added 15 rebounds for his league-leading 63rd double-double, as the Timberwolves beat the Atlanta Hawks 126–114. The 56 points surpassed Mo Williams' franchise record of 52 points set on January 13, 2015, against the Indiana Pacers. He also became the youngest player (22 years, 133 days) with 50 points and 15 rebounds in a game since Shaquille O'Neal (22 years, 45 days) on April 20, 1994 against the Timberwolves. In the Timberwolves' regular season finale on April 11, 2018, Towns had 26 points and 14 rebounds in a 112–106 overtime win over the Denver Nuggets. The win clinched Minnesota a spot in the playoffs for the first time since 2004—no team in the league had gone longer without a postseason appearance than the Timberwolves. It was the first final-day play-in game in the NBA in 21 years, with Denver also vying for a spot in the playoffs. Towns finished the season with 68 double-doubles, the most in the NBA. In Game 3 of the Timberwolves' first-round playoff series against the Houston Rockets, Towns recorded 18 points and 16 rebounds in a 121–105 win. The Timberwolves went on to lose the series in five games, despite Towns recording 23 points and 14 rebounds in a 122–104 loss in Game 5.

Karl-Anthony Towns Jr. (born November 15, 1995) is a Dominican-American professional basketball player for the Minnesota Timberwolves of the National Basketball Association (NBA). He played college basketball for the Kentucky Wildcats. Towns was named to the Dominican Republic national team as a 16-year-old. He was selected with the first overall pick in the 2015 NBA draft by the Minnesota Timberwolves, and went on to be named NBA Rookie of the Year for the 2015–16 season. He has received two All-Star selections.

Towns was born in Edison, New Jersey to an African-American father, Karl Towns Sr., and a Dominican mother, Jacqueline Cruz. He grew up in Piscataway, New Jersey, and attended Lake Nelson Seventh-Day Adventist School, before transferring to Theodore Schor Middle School from Our Lady of Fatima School in 2009. At Theodore Schor, he repeated seventh grade in order to gain an extra year of development. Towns's father played basketball for Monmouth University and coached basketball at Piscataway Technical High School, where the precocious Towns practiced with the junior varsity team as a fifth grader.

As a freshman at St. Joseph High School, Towns led the basketball team to a state championship in 2012, earning himself the top position in the ESPN 25 national ranking of high school players. Towns also led his team to state titles in 2013 and 2014. Towns was selected at the age of 16 to play on the Dominican Republic national basketball team, which represents that nation in international competition. Towns was eligible based on the fact that his mother is from the Dominican Republic. During 2011 and 2012 competitions, John Calipari, head coach at the University of Kentucky and a former NBA head coach, coached the team, which finished third in the 2011 FIBA Americas Championship and fourth place at the 2012 FIBA World Olympic Qualifying Tournament for Men, falling one position short of qualifying for the 2012 Olympic Basketball Tournament.

In December 2012, Towns announced that he was going to reclassify as a senior and commit to play on the Kentucky Wildcats men's basketball team under Coach John Calipari, who had coached him as part of the national team of the Dominican Republic. ESPN, which had ranked him as the top prospect in the 2015 recruiting class, listed him as third-ranked in its 2014 class. Towns graduated from high school with a 3.96 GPA on a 4.5 scale. He was named the 2014 Gatorade Player of the Year.

On June 25, 2015, Towns was selected by the Minnesota Timberwolves with the first overall pick in the 2015 NBA draft. He signed his rookie scale contract with the Timberwolves on July 7, and made his NBA debut in the Timberwolves' season opener against the Los Angeles Lakers on October 28, recording 14 points and 12 rebounds as a starter in a 112–111 win. In the following game on October 30 against the Denver Nuggets, his 28 points and 14 rebounds propelled the Timberwolves to their first 2–0 start with two wins on the road in team history. Over his first 13 games of the season, Towns averaged 16.0 points and 10.4 rebounds per game. Those numbers dropped, however, to 8.4 points and 6.0 rebounds over the next five games. Despite this, on December 3, he was named Western Conference Rookie of the Month for November, becoming just the seventh Timberwolves player to win NBA Rookie of the Month honors.