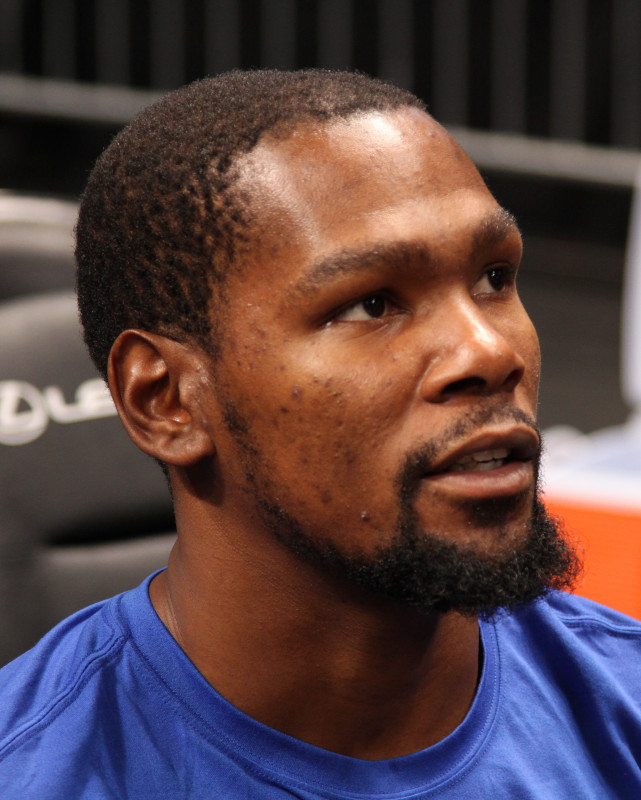 Durant was born on September 29, 1988, in Washington, D.C., to Wanda (née Durant) and Wayne Pratt. When Durant was an infant, his father deserted the family; Wanda and Wayne eventually divorced, and Durant's grandmother Barbara Davis helped raise him. By age 13, his father reentered his life and traveled the country with him to basketball tournaments. Durant has a sister, Brianna, and two brothers, Tony and Rayvonne.

Kevin Wayne Durant (/dʊrænt/; born September 29, 1988), also known simply by his initals KD, is an American professional basketball player for the Brooklyn Nets of the National Basketball Association (NBA). He played one season of college basketball for the University of Texas, and was selected as the second overall pick by the Seattle SuperSonics in the 2007 NBA draft. He played nine seasons with the franchise, which became the Oklahoma City Thunder in 2008, before signing with the Golden State Warriors in 2016, winning back-to-back championships in 2017 and 2018.

Durant and his siblings grew up in Prince George's County, Maryland, on the eastern outskirts of Washington, D.C. He was unusually tall from a young age, and reached 6 ft 0 in (1.83 m) in height while still in middle school (age 13–14). Growing up, Durant wanted to play for his favorite team, the Toronto Raptors, which included his favorite player, Vince Carter. He played Amateur Athletic Union (AAU) basketball for several teams in the Maryland area and was teammates with future NBA players Michael Beasley, Greivis Vásquez, and Ty Lawson, the first of whom Durant remains friends with to this day. During this time, he began wearing #35 as his jersey number in honor of his AAU coach, Charles Craig, who was murdered at the age of 35.

In February 2007, Durant received an invitation to the United States national team training camp. Despite a strong performance, he was cut from the team when its roster was trimmed to its twelve-player limit. Coach Mike Krzyzewski cited the experience of the remaining players as the deciding factor in making the cut. Durant was finally selected to the national team at the 2010 FIBA World Championship and became their leader as other All-Stars were unavailable, a role he downplayed. At the tournament, he led Team USA to its first FIBA World Championship since 1994, earning tournament MVP honors in the process. His final averages for the competition were 22.8 points, 6.1 rebounds, 3.1 assists, and 1.4 steals per game in nine games.

Durant is best known for his prodigious scoring ability. From 2010 to 2014, he won four scoring titles, becoming one of only two players to win four scoring titles in a five-year span. Early in his career, his playing style was isolation-driven, but he quickly developed into an excellent off-ball player who was capable of scoring from the outside as well. By 2013, he was shooting at a historically-great clip, which helped him become one of only seven members of the 50–40–90 club. This ability to impact the offense in a variety of ways helped Durant remain effective and improve an already elite offense upon joining the Warriors in 2016. Throughout his career, his height and 7 ft 4 in (2.24 m) wingspan have created matchup problems for defenses as he is able to get off a clean shot regardless of the situation. Upon beating his man or gaining momentum, he also becomes a strong finisher at the rim; for example, he converted 72.2% of shots in the paint in 2012.

Durant was formerly represented by agents Aaron Goodwin and Rob Pelinka. He left Pelinka in 2013 and signed with the Roc Nation group, headed by Jay-Z. Durant has endorsement deals with Nike, Sprint, Gatorade, Panini, General Electric, and 2K Sports. In 2012, he tried his hand at acting, appearing in the children's film Thunderstruck. In 2013, he earned $35 million, making him the fourth-highest-earning basketball player that year. In an interview with Sports Illustrated, Durant claimed that, despite his high earnings potential, "global marketing and all that stuff" does not interest him.

Off the court, Durant is one of the highest-earning basketball players in the world, due in part to endorsement deals with companies such as Foot Locker and Nike. He has developed a reputation for philanthropy and regularly leads the league in All-Star votes and jersey sales. In recent years, he has contributed to The Players' Tribune as both a photographer and writer. In 2012, he ventured into acting, appearing in the film Thunderstruck.

Durant is very close with his mother, Wanda, a relationship that was detailed in the Lifetime movie The Real MVP: The Wanda Pratt Story. During his time with the Thunder, Durant described himself as a "high school kid" who enjoys playing video games in his spare time. A Christian, Durant has religious tattoos on his stomach, wrist, and back. He owns several properties in the Oklahoma City area and listed his primary residence, located in the affluent Club Villa neighborhood, for sale for $1.95 million in 2013. That same year, he opened a restaurant, KD's Southern Cuisine, in the Bricktown neighborhood and briefly became engaged to Monica Wright, a WNBA player. In 2016, he was a credentialed photographer for The Players' Tribune at Super Bowl 50.

One of the most popular players in the league, Durant's jersey regularly ranks as one of the NBA's best-selling and he is consistently one of the top All-Star vote-getters. Early in his career, he developed a reputation for his kind demeanor; in 2013, Foot Locker released a series of commercials calling him the "nicest guy in the NBA", and become a beloved figure in Oklahoma City, known for his "nice escapades" toward the Thunder's staff. In 2014, he partnered with KIND snacks and launched StrongAndKind.com to show "being kind is not a sign of weakness." Since joining the Warriors, he has become more outspoken and controversial; for example, he was involved in a Twitter back-and-forth with C.J. McCollum in July 2018. Durant has admitted to feeling more genuine in Golden State as opposed to Oklahoma City, where he was "just trying to please everybody".

Throughout his career, Durant has participated in philanthropic causes. In 2013, he pledged $1 million to the American Red Cross for the victims of the 2013 Moore tornado. His generosity inspired the Thunder and Nike to match his donation. He is also a spokesperson for the Washington, D. C. branch of P'Tones Records, a nationwide non-profit after-school music program.

Early in Durant's career, he was criticized for his slim build, defense, and passing. Over time, he grew as a playmaker, increasing his assist numbers every year from 2010 to 2014, though his overall vision still lagged behind the league's best passers'. He also showed defensive improvement, with opponents averaging just .62 points per isolation play against him in 2014, the best success rate for defensive players who faced at least 100 isolations that season. Upon going to Golden State, he developed into a more reliable off-ball defender and rim protector, and in 2018 was considered for the NBA Defensive Player of the Year Award.

Less than a month before the start of the 2014 FIBA Basketball World Cup, Durant announced that he would be dropping out of the competition, citing mental and physical exhaustion as reasons for his departure. He rejoined Team USA in 2016 for the Olympics, where he led them to a gold medal. In recognition of his performances, Durant was named the 2016 co-USA Basketball Male Athlete of the Year, along with Carmelo Anthony, for the second time in his career.

On February 19 of the lockout-shortened 2011–12 season, Durant recorded his first career 50-point game, scoring 51 points against the Denver Nuggets. At the All-Star Game, he scored 36 points and was awarded the NBA All-Star Game Most Valuable Player Award. Durant finished the year with a scoring average of 28 points per game, representing his third straight scoring title. Behind his play, the Thunder won 47 games and entered the playoffs as the Western Conference's second seed. In Game 1 of the first round against the Dallas Mavericks, Durant hit a game-winner with 1.5 seconds remaining. Oklahoma City would go on to defeat Dallas, the Lakers, and the San Antonio Spurs before losing to the Miami Heat in the Finals. For the NBA Finals, Durant led all players with 30.6 points per game, doing so on a 54.8 shooting rate.

With a scoring average of 28.1 points per game to finish the 2012–13 season, Durant failed to defend his scoring title; however, with a 51 percent shooting rate, a 41.6 percent three point shooting rate, and a 90.5 free throw shooting rate, he became the youngest player in NBA history to join the 50–40–90 club. Finishing the year with a 60–22 record, Oklahoma City earned the first seed in the Western Conference. In the first round of the playoffs against the Houston Rockets, Westbrook tore his meniscus, forcing him to miss the remainder of the postseason. Without Westbrook, Durant was given more responsibility, averaging a career-high 30.8 points per game throughout the playoffs, but Oklahoma City were eventually eliminated in the second round by the Memphis Grizzlies in five games.

In 2017, Durant became involved with YouTube. In February, he visited YouTube's headquarters for a speaking engagement. On April 7, 2017, he created a YouTube account and soon began to upload live stream vlogs onto it. In his first vlog, he detailed, "I'm so excited because I got off social media. I got off the Instagram, Twitter, all that stuff, just to distance myself a bit. But somebody talked me into getting on the YouTube." As of June 2020, Durant's YouTube channel has received over 790,000 subscribers and 38 million video views. On February 13, 2018, Deadline reported that Durant, in partnership with producer Brian Grazer's Imagine Television, will create a basketball-themed scripted drama for Apple.

On July 7, 2018, Durant re-signed with the Warriors, on a reported two-year, $61.5 million contract, which included a player option for the second year. During an overtime loss to the Clippers on November 12, 2018, Green cursed out Durant over his upcoming free agency status after the season, and he was suspended for the much-publicized blowup. On November 29, Durant scored a season-high 51 points in a 131–128 overtime loss to the Toronto Raptors, thus scoring 40 or more in his third straight game. With Curry and Green sidelined for most of November, the Warriors finished the month with a 15–8 record and five straight road losses, after starting the season at 10–1.

During the 2009–10 season, Durant was selected to his first NBA All-Star Game. Behind his play, the Thunder improved their record by 27 wins from the previous year and defied expectations to make the playoffs. With a scoring average of 30.1 points per game, Durant became the youngest NBA scoring champion and was selected to his first All-NBA team. In his playoff debut, he scored 24 points in a Game 1 loss against the Los Angeles Lakers. Oklahoma City would go on to lose the series in six games, but the team's performance led many analysts to label them as an upcoming title contender.

On June 30, 2019, Durant announced that he planned to sign with the Brooklyn Nets after the July moratorium ended on July 6. On July 1, Golden State CEO Joe Lacob announced that Durant's No. 35 will no longer be issued by the Warriors. Durant signed with Brooklyn on July 7, in a sign-and-trade deal. Durant did not appear at all in the 2019–20 season and later revealed that he had decided shortly after his June 2019 injury that he would be sitting out the entire 2019–20 season. On March 17, 2020, Durant and three other Nets players tested positive for COVID-19. On April 1, it was announced that Durant was cleared and had recovered.

On June 15, 2020, Durant became a minority owner of MLS side Philadelphia Union, acquiring a 5% stake with the possibility to add another 5% in the near future.

On December 22, 2020, Durant made his Nets debut, putting up 22 points, five rebounds, three assists and three steals, in a 125–99 win over the Golden State Warriors.